In geometry, the hexagonal tiling or hexagonal tessellation is a regular tiling of the Euclidean plane, in which three hexagons meet at each vertex. It has Schläfli symbol of {6,3} or t{3,6} (as a truncated triangular tiling).

Conway calls it a hextille.

The internal angle of the hexagon is 120 degrees so three hexagons at a point make a full 360 degrees. It is one of three regular tilings of the plane. The other two are the triangular tiling and the square tiling.

The hexagonal tiling is the densest way to arrange circles in two dimensions. The Honeycomb conjecture states that the hexagonal tiling is the best way to divide a surface into regions of equal area with the least total perimeter. The optimal three-dimensional structure for making honeycomb (or rather, soap bubbles) was investigated by Lord Kelvin, who believed that the Kelvin structure (or body-centered cubic lattice) is optimal. However, the less regular Weaire–Phelan structure is slightly better.

This structure exists naturally in the form of graphite, where each sheet of graphene resembles chicken wire, with strong covalent carbon bonds. Tubular graphene sheets have been synthesised; these are known as carbon nanotubes. They have many potential applications, due to their high tensile strength and electrical properties. Silicene is similar.

Chicken wire consists of a hexagonal lattice (often not regular) of wires.

There are three distinct uniform colorings of a hexagonal tiling, all generated from reflective symmetry of Wythoff constructions. The (h,k) represent the periodic repeat of one colored tile, counting hexagonal distances as h first, and k second.

The 3-color tiling is a tessellation generated by the order-3 permutohedrons.

The hexagons can be dissected into sets of 6 triangles. This process leads to two 2-uniform tilings, and the triangular tiling:

It is also possible to subdivide the prototiles of certain hexagonal tilings by two, three, four or nine equal pentagons:

This tiling is topologically related as a part of sequence of regular tilings with hexagonal faces, starting with the hexagonal tiling, with Schläfli symbol {6,n}, and Coxeter diagram

This tiling is topologically related to regular polyhedra with vertex figure n3, as a part of sequence that continues into the hyperbolic plane.

It is similarly related to the uniform truncated polyhedra with vertex figure n.6.6.

This tiling is also a part of a sequence of truncated rhombic polyhedra and tilings with [n,3] Coxeter group symmetry. The cube can be seen as a rhombic hexahedron where the rhombi are squares. The truncated forms have regular n-gons at the truncated vertices, and nonregular hexagonal faces.

Like the uniform polyhedra there are eight uniform tilings that can be based from the regular hexagonal tiling (or the dual triangular tiling).

There are 3 types of monohedral convex hexagonal tilings.[1] They are all isohedral. Each has parametric variations within a fixed symmetry. Type 2 contains glide reflections, and is 2-isohedral keeping chiral pairs distinct.

Hexagonal tilings can be made with the identical {6,3} topology as the regular tiling (3 hexagons around every vertex). With isohedral faces, there are 13 variations. Symmetry given assumes all faces are the same color. Colors here represent the lattice positions.[2] Single-color (1-tile) lattices are parallelogon hexagons.

Other isohedrally-tiled topological hexagonal tilings are seen as quadrilaterals and pentagons that are not edge-to-edge, but interpreted as colinear adjacent edges:

The 2-uniform and 3-uniform tessellations have a rotational degree of freedom which distorts 2/3 of the hexagons, including a colinear case that can also be seen as a non-edge-to-edge tiling of hexagons and larger triangles.[3]

It can also be distorted into a chiral 4-colored tri-directional weaved pattern, distorting some hexagons into parallelograms. The weaved pattern with 2 colored faces have rotational 632 (p6) symmetry.

The hexagonal tiling can be used as a circle packing, placing equal diameter circles at the center of every point. Every circle is in contact with 3 other circles in the packing (kissing number).[4] The lattice volume is filled by two circles, so the circles can be alternately colored. The gap inside each hexagon allows for one circle, creating the densest packing from the triangular tiling, with each circle contact with the maximum of 6 circles. 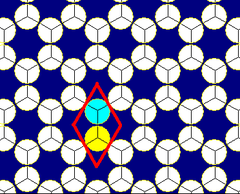 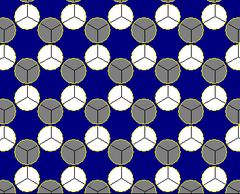