In geometry, the rhombic dodecahedron is a convex polyhedron with 12 congruent rhombic faces. It has 24 edges, and 14 vertices of two types. It is a Catalan solid, and the dual polyhedron of the cuboctahedron.

The rhombic dodecahedron is a zonohedron. Its polyhedral dual is the cuboctahedron. The long diagonal of each face is exactly √2 times the length of the short diagonal, so that the acute angles on each face measure arccos(1/3), or approximately 70.53°.

Being the dual of an Archimedean polyhedron, the rhombic dodecahedron is face-transitive, meaning the symmetry group of the solid acts transitively on the set of faces. In elementary terms, this means that for any two faces A and B there is a rotation or reflection of the solid that leaves it occupying the same region of space while moving face A to face B.

The rhombic dodecahedron is one of the nine edge-transitive convex polyhedra, the others being the five Platonic solids, the cuboctahedron, the icosidodecahedron and the rhombic triacontahedron.

The rhombic dodecahedron can be used to tessellate three-dimensional space. It can be stacked to fill a space much like hexagons fill a plane.

The graph of the rhombic dodecahedron is nonhamiltonian.

the radius of the midsphere is

and the radius of the circumscribed sphere is

The area A and the volume V of the rhombic dodecahedron of edge length a are:

The rhombic dodecahedron has four special orthogonal projections along its axes of symmetry, centered on a face, an edge, and the two types of vertex, threefold and fourfold. The last two correspond to the B2 and A2 Coxeter planes.

The eight vertices where three faces meet at their obtuse angles have Cartesian coordinates:

The coordinates of the six vertices where four faces meet at their acute angles are:

For example, with 4 square faces, and 60-degree rhombic faces, and D4h dihedral symmetry, order 16. It be seen as a cuboctahedron with square pyramids augmented on the top and bottom. 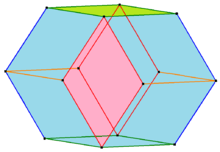 In 1960 Stanko Bilinski discovered a second rhombic dodecahedron with 12 congruent rhombus faces, the Bilinski dodecahedron. It has the same topology but different geometry. The rhombic faces in this form have the golden ratio. [3][4] 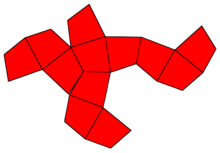 Another topologically equivalent variation, sometimes called a trapezoidal dodecahedron, is isohedral with tetrahedral symmetry order 24, distorting rhombic faces into kites. It has 8 vertices adjusted in or out in alternate sets of 4, with the limiting case a tetrahedral envelope. Variations can be parametrized by (a,b), where b is determined from a for planar faces. (1,1) is the rhombic solution. As (a) approaches 1/2, (b) approaches infinity. 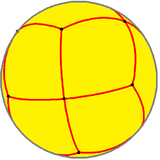 This polyhedron is a part of a sequence of rhombic polyhedra and tilings with [n,3] Coxeter group symmetry. The cube can be seen as a rhombic hexahedron where the rhombi are squares.

Similarly it relates to the infinite series of tilings with the face configurations V3.2n.3.2n, the first in the Euclidean plane, and the rest in the hyperbolic plane.

Like many convex polyhedra, the rhombic dodecahedron can be stellated by extending the faces or edges until they meet to form a new polyhedron. Several such stellations have been described by Dorman Luke.[5]

The first stellation, often simply called the stellated rhombic dodecahedron, is well known. It can be seen as a rhombic dodecahedron with each face augmented by attaching a rhombic-based pyramid to it, with a pyramid height such that the sides lie in the face planes of the neighbouring faces: 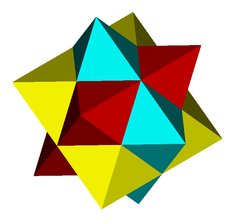 Luke describes four more stellations: the second and third stellations (expanding outwards), one formed by removing the second from the third, and another by adding the original rhombic dodecahedron back to the previous one. 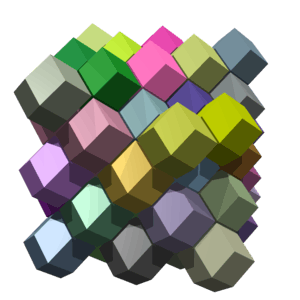 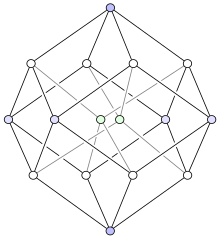 This decomposition gives an interesting method for constructing the rhombic dodecahedron: cut a cube into six congruent square pyramids, and attach them to the faces of a second cube. The triangular faces of each pair of adjacent pyramids lie on the same plane, and so merge into rhombuses. The 24-cell may also be constructed in an analogous way using two tesseracts.[6]