In geometry, the rhombicuboctahedron, or small rhombicuboctahedron, is an Archimedean solid with eight triangular and eighteen square faces. There are 24 identical vertices, with one triangle and three squares meeting at each. (Note that six of the squares only share vertices with the triangles while the other twelve share an edge.) The polyhedron has octahedral symmetry, like the cube and octahedron. Its dual is called the deltoidal icositetrahedron or trapezoidal icositetrahedron, although its faces are not really true trapezoids.

It can also be called an expanded cube or cantellated cube or a cantellated octahedron from truncation operations of the uniform polyhedron.

There are distortions of the rhombicuboctahedron that, while some of the faces are not regular polygons, are still vertex-uniform. Some of these can be made by taking a cube or octahedron and cutting off the edges, then trimming the corners, so the resulting polyhedron has six square and twelve rectangular faces. These have octahedral symmetry and form a continuous series between the cube and the octahedron, analogous to the distortions of the rhombicosidodecahedron or the tetrahedral distortions of the cuboctahedron. However, the rhombicuboctahedron also has a second set of distortions with six rectangular and sixteen trapezoidal faces, which do not have octahedral symmetry but rather Th symmetry, so they are invariant under the same rotations as the tetrahedron but different reflections.

The rhombicuboctahedron dissected into two square cupolae and a central octagonal prism. A rotation of one cupola creates the pseudo­rhombi­cubocta­hedron. Both of these polyhedra have the same vertex figure: 3.4.4.4.

There are three pairs of parallel planes that each intersect the rhombicuboctahedron in a regular octagon. The rhombicuboctahedron may be divided along any of these to obtain an octagonal prism with regular faces and two additional polyhedra called square cupolae, which count among the Johnson solids; it is thus an elongated square orthobicupola. These pieces can be reassembled to give a new solid called the elongated square gyrobicupola or pseudorhombicuboctahedron, with the symmetry of a square antiprism. In this the vertices are all locally the same as those of a rhombicuboctahedron, with one triangle and three squares meeting at each, but are not all identical with respect to the entire polyhedron, since some are closer to the symmetry axis than others.

The rhombicuboctahedron has six special orthogonal projections, centered, on a vertex, on two types of edges, and three types of faces: triangles, and two squares. The last two correspond to the B2 and A2 Coxeter planes.

The rhombicuboctahedron can also be represented as a spherical tiling, and projected onto the plane via a stereographic projection. This projection is conformal, preserving angles but not areas or lengths. Straight lines on the sphere are projected as circular arcs on the plane.

A half symmetry form of the rhombicuboctahedron,

, Schläfli symbol s2{3,4}, and can be called a cantic snub octahedron. This form can be visualized by alternatingly coloring the edges of the 6 squares. These squares can then be distorted into rectangles, while the 8 triangles remain equilateral. The 12 diagonal square faces will become isosceles trapezoids. In the limit, the rectangles can be reduced to edges, and the trapezoids become triangles, and an icosahedron is formed, by a snub octahedron construction,

, s{3,4}. the compound of two icosahedra is constructed from both alternated positions.

Cartesian coordinates for the vertices of a rhombicuboctahedron centred at the origin, with edge length 2 units, are all the even permutations of

The area A and the volume V of the rhombicuboctahedron of edge length a are:

The optimal packing fraction of rhombicuboctahedra is given by

It was noticed that this optimal value is obtained in a Bravais lattice by de Graaf (2011). Since the rhombicuboctahedron is contained in a rhombic dodecahedron whose inscribed sphere is identical to its own inscribed sphere, the value of the optimal packing fraction is a corollary of the Kepler conjecture: it can be achieved by putting a rhombicuboctahedron in each cell of the rhombic dodecahedral honeycomb, and it cannot be surpassed, since otherwise the optimal packing density of spheres could be surpassed by putting a sphere in each rhombicuboctahedron of the hypothetical packing which surpasses it.

The large polyhedron in the 1495 portrait of Luca Pacioli, traditionally though controversially attributed to Jacopo de' Barbari, is a glass rhombicuboctahedron half-filled with water. The first printed version of the rhombicuboctahedron was by Leonardo da Vinci and appeared in his 1509 Divina Proportione.

A spherical 180° × 360° panorama can be projected onto any polyhedron; but the rhombicuboctahedron provides a good enough approximation of a sphere while being easy to build. This type of projection, called Philosphere, is possible from some panorama assembly software. It consists of two images that are printed separately and cut with scissors while leaving some flaps for assembly with glue.[4] 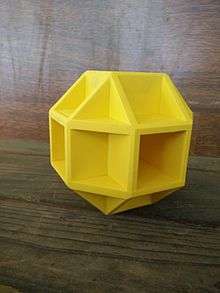 A Cabela's branded "self-healing" target made of ballistic material

The Freescape games Driller and Dark Side both had a game map in the form of a rhombicuboctahedron.

The "Hurry-Scurry Galaxy" in the videogame Super Mario Galaxy has a planet in the similar shape of a rhombicuboctahedron.

During the Rubik's Cube craze of the 1980s, one twisty puzzle sold had the form of a rhombicuboctahedron (the mechanism was of course that of a Rubik's Cube).[1]

The Rubik's Snake toy (left) was usually sold in the shape of a stretched rhombicuboctahedron (12 of the squares being replaced with 1:√2 rectangles).

The rhombicuboctahedron is one of a family of uniform polyhedra related to the cube and regular octahedron.

This polyhedron is topologically related as a part of sequence of cantellated polyhedra with vertex figure (3.4.n.4), and continues as tilings of the hyperbolic plane. These vertex-transitive figures have (*n32) reflectional symmetry.