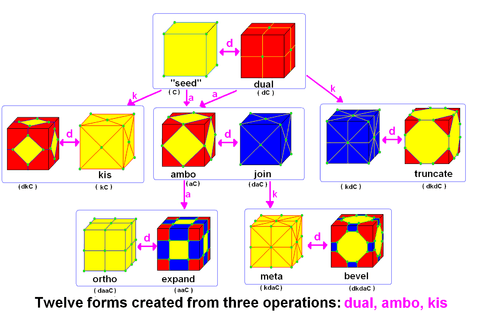 This example chart shows how 11 new forms can be derived from the cube using 3 operations. The new polyhedra are shown as maps on the surface of the cube so the topological changes are more apparent. Vertices are marked in all forms with circles.

Conway polyhedron notation is used to describe polyhedra based on a seed polyhedron modified by various operations.

The seed polyhedra are the Platonic solids, represented by the first letter of their name (T,O,C,I,D); the prisms (Pn), antiprisms (An) and pyramids (Yn). Any convex polyhedron can serve as a seed, as long as the operations can be executed on it.

John Conway extended the idea of using operators, like truncation defined by Kepler, to build related polyhedra of the same symmetry. His descriptive operators can generate all the Archimedean solids and Catalan solids from regular seeds. Applied in a series, these operators allow many higher order polyhedra to be generated.

Elements are given from the seed (v,e,f) to the new forms, assuming seed is a convex polyhedron: (a topological sphere, Euler characteristic = 2) An example image is given for each operation, based on a cubic seed. The basic operations are sufficient to generate the reflective uniform polyhedra and theirs duals. Some basic operations can be made as composites of others.

These extended operators can't be created in general from the basic operations above. Some can be created in special cases with k and t operators only applied to specific sided faces and vertices. For example a chamfered cube, cC, can be constructed as t4daC, as a rhombic dodecahedron, daC or jC, with its valence-4 vertices truncated. And a quinto-dodecahedron, qD can be constructed as t5daaD or t5deD or t5oD, a deltoidal hexecontahedron, deD or oD, with its valence-5 vertices truncated.

These extended operators can't be created in general from the basic operations above. The gyro/snub operations are needed to generate the uniform polyhedra and duals with rotational symmetry.

Geometric artist George W. Hart created an operation he called a propellor, and another reflect to create mirror images of the rotated forms.

The half operator, h, from Coxeter, reduces square faces into digons, with two coinciding edges, which may or may not be replaced by a single edge. If digons remain, subsequently truncation operations can expand digons into square faces.

All of the five regular polyhedra can be generated from prismatic generators with zero to two operators:

The regular Euclidean tilings can also be used as seeds:

The cube can generate all the convex uniform polyhedra with octahedral symmetry. The first row generates the Archimedean solids and the second row the Catalan solids, the second row forms being duals of the first. Comparing each new polyhedron with the cube, each operation can be visually understood. (Two polyhedron forms don't have single operator names given by Conway.)

The truncated icosahedron as a nonregular seed creates more polyhedra which are not vertex or face uniform.

In general the seed polyhedron can be considered a tiling of a surface since the operators represent topological operations so the exact geometric positions of the vertices of the derived forms are not defined in general. A convex regular polyhedron seed can be considered a tiling on a sphere, and so the derived polyhedron can equally be assumed to be positioned on the surface of a sphere. Similar a regular tiling on a plane, such as a hexagonal tiling can be a seed tiling for derived tilings. Nonconvex polyhedra can become seeds if a related topological surface is defined to constrain the positions of the vertices. For example toroidal polyhedra can derive other polyhedra with point on the same torus surface.

Iterating operators on simple forms can produce progressively larger polyhedra, maintaining the fundamental symmetry of the seed element. The vertices are assumed to be on the same spherical radius. Some generated forms can exist as spherical tilings, but fail to produce polyhedra with planar faces.