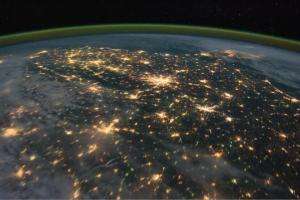 This video was taken by the crew of Expedition 29 on board the ISS. The pass begins over Canada and ends in the Caribbean Sea, covering the entire Central United States.

Somewhat misleadingly, the central states are not in the exact center, but a bit towards the East Coast - states such as Colorado, geographically very close to the center of the contiguous United States, are almost never considered the central US, while Ohio is.

Almost all of the area of these 20 states is in the Gulf of Mexico drainage basin, and most of that is in the Mississippi Basin. Small areas near the Great Lakes drain into the Great Lakes and eventually the St. Lawrence River; the Red River Basin is centered on the North Dakota-Minnesota border and drains to Hudson Bay.

The Central Time Zone is the same area plus the Florida Panhandle, minus Ohio, Michigan, most of Indiana, westernmost fringes of Great Plains states, eastern and northern Kentucky, eastern Tennessee, and El Paso, Texas.

Organizations that need to subdivide the US are free to define a "Central" region to fit their needs.