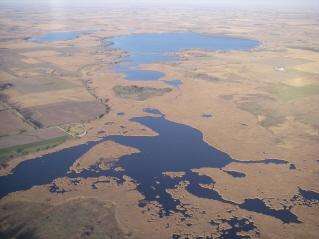 Barringer Slough in Iowa, a remnant of the extensive prairie wetlands that once covered the region.

The Prairie Pothole Region (PPR) is an area of the northern Great Plains and midgrass and tallgrass prairies that contains thousands of shallow wetlands known as potholes. These potholes are the result of glacier activity in the Wisconsin glaciation, which ended about 10,000 years ago. The decaying ice sheet left behind depressions formed by the uneven deposition of till in ground moraines. These depressions are called potholes, glacial potholes, kettles, or kettle lakes. They fill with water in the spring, creating wetlands which range in duration from temporary to semipermanent.[1]

The region covers an area of about 715,000 km2 (276,000 sq mi), including parts of three Canadian provinces (Saskatchewan, Manitoba, and Alberta) and five U.S. states (Minnesota, Iowa, North and South Dakota, and Montana).[1]

Few natural surface water drainage systems occur in the region; pothole wetlands are not connected by surface streams. They receive most of their water from spring snowmelt. Some pothole wetlands also receive groundwater inflow, so they typically last longer each year than those that only receive water from precipitation. Shorter-duration wetlands fed only by precipitation typically are sources of groundwater recharge.[1]

More than half of the potholes have been drained and converted to agriculture.[1][2] Pothole loss is 90% or more in places.[3] Those potholes that remain are important habitats for migratory waterfowl and other wildlife, supporting more than 50% of North America's migratory waterfowl.[4] The Prairie Pothole Region is one of North America's most important areas for duck reproduction. Although the region contains only about one-tenth of the continent's habitat area for breeding of waterfowl, roughly half the primary species of game ducks on the continent breed there. The region accounts for more than 60% of the breeding populations of mallard, gadwall, blue-winged teal, northern shoveler, northern pintail, redhead, and canvasback ducks.[5]