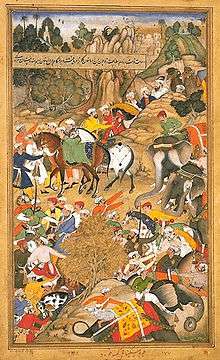 Akbar plunders the Kingdom of Sirohi in 1572. 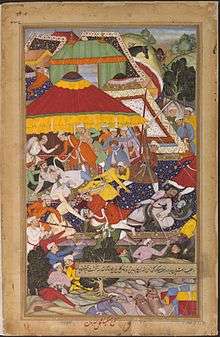 Khan Kilan wounded by an envoy of the ruler of Sirohi, Man Singh Deohra, while passing through the Rajput territory of Sirohi

Sirohi State was a princely state in the Rajputana Agency in India with its capital at Sirohi. The state lost its independence and became a British protectorate in 1823 when it was subsumed into the British Raj. Shortly after Indian independence in 1947, Sirohi state was merged with the Rajasthan State on 16 November 1949 and its existence came to an end.

Sirohi State was in the Rajputana agency. It had an area 1,964 square miles (5,090 km2) The territory was much broken up by hills and rocky ranges; the Aravalli range divided it into two portions, running from north-east to south-west. The south and south-east part of the territory is mountainous and rugged, containing the lofty Mount Abu, an isolated mass of granite rock, culminating in a cluster of hills, enclosing several valleys surrounded by rocky ridges, like great hollows. On both sides of the Aravallis the country is intersected with numerous water channels, which run with considerable force and volume during the height of the rainy season, but are dry for the greater part of the year. The only river of any importance is the Western Banas.[2]

In 1911 the Encyclopædia Britannica Eleventh Edition recorded that a large portion of the state was covered with dense jungle, in which wild animals, including the tiger, bear and leopard, abounded; and that the climate was on the whole dry (in the south and east there was usually a fair amount of rain. On Abu the average annual rainfall is about 64 inches (160 cm), whereas in Erinpura, less than 50 miles (80 km) to the north, the average fall is only between 12 and 13 inches (30 and 33 cm).[2]

During the 19th century the Rajputana Railway was built. It traversed the state, and a station was built at Abu Road, 28 miles (45 km) south of the town of Sirohi.[2]

In 1405, Deora king Rao Sobhaji founded the town of Shivpuri on the western slope of Siranwa Hill. Shivpuri today lies in ruins. In 1425, his son and successor, Sehastramal (or Sahastramal, Sehastramal), founded a fortress on the eastern slope of the same hill, which became his capital and grew into the present-day town of Sirohi.[3]

Rao Surtan of Sirohi defeated the army of Mughal emperor Akbar in the famous battle of Dattani. Nandia come in sirohi scientist proved that the lord Krishna got married hear it has a beautiful fort named ऋषीश्वर temple Sirohi State used to issue its own postage stamp, and even coins for some years, which are now rare.

During the early years of the 19th century, Sirohi suffered much from wars with Jodhpur and the hill tribes of the area. The protection of the British was sought in 1817; the pretensions of Jodhpur to suzerainty over Sirohi were disallowed, and in 1823 a treaty was concluded with the British government. Sirohi became a self-governing princely state within British India, and part of the Rajputana Agency.[2]

For services rendered during the Revolt of 1857, the Rao received a remission of half his tribute. Rao Keshri Singh (ruled 1875-1920) and his successors were granted the title Maharao (equivalent to Maharaja) in 1889.[2]

Rao Keshari Sing loved his both wives Rani Gulab and Rani Krishna.. So he founded two villages in the Sirohi constituency named Gulabganj & Krishnaganj respectively to show their Heartily love towards their wives.. The both villages still occurs in Sirohi region and among them Krishnaganj have a great importance weather religious or political means in the Sirohi region.. When India became independent in 1947, it was agreed that the princely states would lose the independence that they had held and that the states would be integrated into the central administration. Sirohi state was merged with the Rajasthan State on 16 November 1949 and its it ceased to exist as a separate entity.[3]