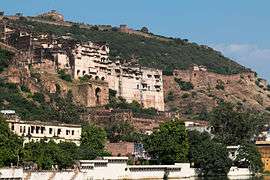 View of the Garh Palace in Bundi 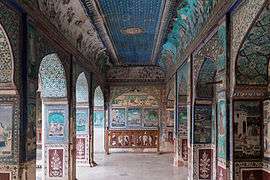 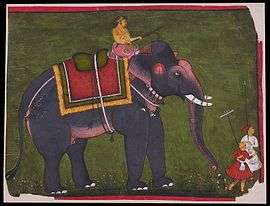 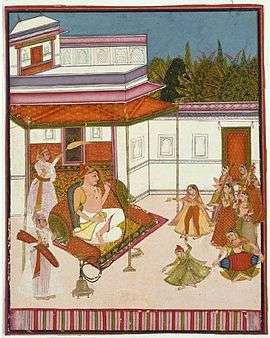 Bundi State[1] was a princely state in the era of British India. Its relations with the British were managed by the Rajputana Agency. The last ruler of Bundi State signed the accession to join the Indian Union in 1949.

The Haraoti-Tonk Agency, with headquarters at Deoli, dealt with the states of Tonk and Bundi, as well as with the state of Shahpura.[2]

The hereditary rulers of Bundi used the title ‘Rao’ before being granted the prefix ‘Raja’ by the Mughals. A Raja is a ruler of exalted rank but inferior to Maharana or Maharawal.

The coat of arms of Bundi was a shield depicting a warrior emerging from flames, signifying the creation-legend of the ruling Chauhan clan of Rajputs which was supposedly created from fire. The shield is flanked by cows representing dharma or righteousness; it is crowned by a hand holding a Katar.[4]