It consists of 74 judges and a chief justice who are in charge of the general policy adopted in the administration of justice.[2] In September 2016, the centre government forwarded names of 15 new judges to the President for his signature on their warrants of appointment. Of the 15, nine are from among lawyers and 6 from the subordinate judiciary. The nine lawyers are V. Parthiban, R. Subramanian, M. Govindaraj, M. Sundar, R. Sureshkumar, Nisha Banu, M.S. Ramesh, S.M. Subramaniam and Dr. Anita Sumanth. [3]

From 1817 to 1862, the Supreme Court of Madras, the precursor to the present Madras High Court, was situated in a building opposite the Chennai Beach railway station. From 1862 to 1892, the High Court was also housed in that building. The present buildings were officially inaugurated on 12 July 1892, when the then Madras Governor, Beilby, Baron Wenlock, handed over the key to the then Chief Justice Sir Arthur Collins.[4] 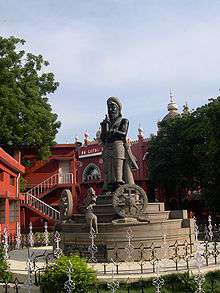 The statue of Manuneethi Cholan in the Madras High Court premises

British India's three presidency towns of Madras (Chennai), Bombay (Mumbai), and Calcutta (Kolkata) were each granted a High Court by letters patent dated 26 June 1862.[5] The letters patent were issued by Queen Victoria under the authority of the British parliament's Indian High Courts Act 1861. The three courts remain unique in modern India, having been established under British royal charter; this is in contrast with the country's other high courts, which have been directly established under the Indian Constitution. However, the Constitution of India recognises the status of the older courts.

The Madras High Court was formed by merging the Supreme Court of Judicature at Madras, and the Sudder Dewanny Adawlut. The Court was required to decide cases in accordance with justice, equity and good conscience. The earliest judges of the High Court included Judges Holloway, Innes and Morgan. The first Indian to sit as a judge of the High Court was Justice T. Muthuswamy Iyer. Other early Indian judges included Justices V. Krishnaswamy Iyer and P. R. Sundaram Iyer.

The Madras High Court was a pioneer in Original Side jurisdiction reform in favour of Indian practitioners as early as the 1870s.

The Madras High Court's history means that the decisions of the British Judicial Committee of the Privy Council are still binding on it, provided that the ratio of a case has not been over-ruled by the Supreme Court of India.

Although the name of the city was changed from Madras to Chennai in 1996, the Court as an institution did not follow suit, and retained the name as the Madras High Court. However, a Bill to rename the Madras High Court as the Chennai High Court was approved by the cabinet on 5 July 2016, along with the change of name of the Calcutta High Court and Bombay High Court as Kolkata High Court and Mumbai High Court respectively.[6] The Bill called High Courts (Alternation of Names) Bill has been introduced in the Lok Sabha on 19 July 2016.[7] The Bill is yet to be passed by both Houses of Parliament. However, the Tamil Nadu Legislative Assembly has passed a unanimous resolution appealing to the Central Government to rename the court as High Court of Tamil Nadu since the Court serves the whole state.[8] 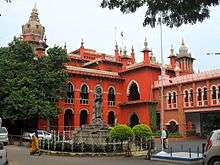 The building of the High Court, an exquisite example of Indo-Saracenic style of architecture, was built in 1892 with the design prepared by J.W. Brassington and later under the guidance of the famed architect Henry Irwin,[9] who completed it with the assistance of J.H. Stephens. The High Court building was damaged in the shelling of Madras by S.M.S. Emden on 22 September 1914, at the beginning of the First World War. It remains one of the very few Indian buildings to have been damaged by a German attack.

There are several matters of architectural interest in the High Court. The painted ceilings and the stained glass doors are masterpieces in themselves. The old lighthouse of the city is housed within the High Court campus, but is unfortunately poorly maintained and is in disrepair.

The Department of Posts has allotted a Postal Index Number (PIN) code of 600 104 to the zone occupied by the Madras High Court. The boundaries of the High Court complex are marked by two roads, namely, Prakasam Road (formerly Broadway) and Rajaji Road (the old North Beach Road), stretching northward from the statue of Rajaji in the northeast and the statue of T. Prakasamgaru in the southwest within the complex. The complex houses the largest number of courts in Asia.[10]

Panoramic view of the High Court and its surroundings

With Chief Justice Sanjay Kishan Kaul heading the court, it currently has 54 judges who exercise civil, criminal, writ, testamentary and admiralty jurisdiction, with the swearing in of 15 judges on 05 October 2016. The Madurai Bench has been functioning since 2004.

The vestiges of the colonial High Court continue to characterise the premises till date. In a rare tradition which is today a distinction, Judges of the Madras High Court are still led by orderlies who bear a ceremonial mace made of silver. This is a practice so old and Anglican that most High Courts and even the Supreme Court of India have either not had the practice at all or have abandoned it long back.[11]

The Madras High Court is the birthplace of organised legal reporting in India. It is home to the Madras Law Journal.,[12] which was the first journal dedicated to reporting texts of judgments of the High Court started way back in 1891.

An informal eponymous club called The Saturday Club, that met at 11 a. m. every week, was started at the house of the Vakil Bar's senior member Sir S. Subramania Iyer in Mylapore in 1888 with all leading members of the Madras Bar taking part. At one of these meetings it was decided to start 'The Madras Law Journal', which was inspired by the then newly established periodicals like 'Law Quarterly Review', started by Sir Frederick Pollock in England in 1885 and 'The Harvard Law Review' established by Harvard Law School Association in 1887.

The objectives of the journal were laid out in the preface of the first issue: "In addition to giving our own reports of the decisions of the High Courts in Madras and other places, we hope to place before our readers translations of various Hindu Law Books which remain yet untranslated, insofar as they have bearing on questions which practically arise for decision every day in our Courts of Justice. We propose further from time to time, to place side by side the conflicting decisions of the various Courts in India on the same point in the hope that such procedure will enable the Courts to act in greater harmony than they do at present in the interpretation of Acts and enunciation of general principles of law and when this is not possible, to enable the Legislature to bring about such harmony by removing the ambiguities which may have given rise to such discordant views."

Right from the beginning, The Madras Law Journal has been a source of inspiration and instruction to the students of law and its notes and editorial reviews always evoked admiration and respect. It achieved well-deserved fame throughout India, in England and America and indeed throughout the British Empire for its quickness and accuracy in reporting and discrimination in the selection of cases to be reported. It has now came to occupy a premier place among legal periodicals in the country and its weight and authority have been consistently considerable with the Bench and the Bar in all parts of India.

Established in 2004, the court is a boon to the people in thirteen southern districts of Tamil Nadu. The bench has Kanyakumari, Tirunelveli, Tuticorin, Madurai, Dindigul, Ramanathapuram, Virudhunagar, Theni, Sivaganga, Pudukottai, Tanjore, Tiruchi and Karur districts under its jurisdiction.

The sprawling 107-acre campus is one of the largest court campuses in the country and the spacious four-storey administrative building attracts hundreds of litigants every day. The court complex has 12 court halls, furnished on the model of the court halls in the Supreme Court, the Delhi and the Madras High Courts.

The court, since its inauguration on 24 July 2004, has perked up the legal process in the southern districts and has cultivated a large number of social activists, who vouch for the interest of the public though their public interest litigations.[13] 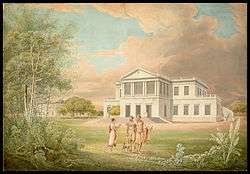