Geography of the British Virgin Islands 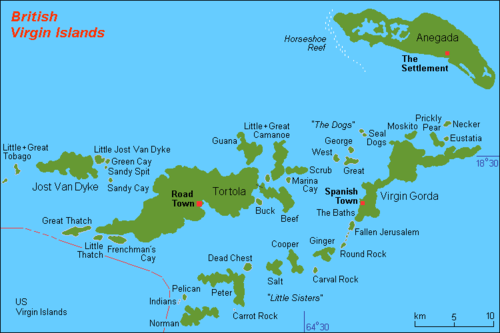 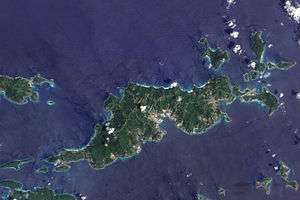 The British Virgin Islands are located in the Caribbean, between the Caribbean Sea and the North Atlantic Ocean, east of Puerto Rico.Its geographic coordinates are 18°30′N 64°30′W﻿ / ﻿18.500°N 64.500°W﻿ / 18.500; -64.500. Map references include Central America and the Caribbean. The area totals 151 km² (about 0.9 times the size of Washington, DC) and comprises 16 inhabited and more than 20 uninhabited islands; includes the islands of Tortola, Anegada, Virgin Gorda and Jost van Dyke. There are no bodies of water on the land. There are no land boundaries. There is 80 km of coastline. Maritime claims include 3 nmi (5.6 km; 3.5 mi) of territorial sea and exclusive a 200 nmi (370.4 km; 230.2 mi) fishing zone. It has a tropical, humid climate, with temperatures moderated by trade winds. Its terrain consists of coral islands, and is relatively flat. It has volcanic islands and is steep and hilly. Its lowest point is the Caribbean Sea and its highest point is Mount Sage at 521 metres (1,709 ft) above sea level. Its natural resources are negligible. In terms of land use, it is 20% arable land, 6.67% permanent crops and 73.33% other as of a 2005 figure. Its natural hazards consist of hurricanes and tropical storms from July to October. There is limited natural fresh water resources (except for a few seasonal streams and springs on Tortola, most of the islands' water supply comes from wells and rainwater catchments).It has strong ties to nearby US Virgin Islands and Puerto Rico.