Greenland is located between the Arctic Ocean and the North Atlantic Ocean, northeast of Canada and northwest of Iceland. The territory comprises the island of Greenland - the largest island in the world - and more than a hundred other smaller islands (see alphabetic list). An island, Greenland has no land boundaries and 44,087 km of coastline. A sparse population is confined to small settlements along certain sectors of the coast. Greenland possesses the world's second largest ice sheet.

Greenland sits atop the Greenland plate, a subplate of the North American plate.[1][2] The Greenland craton is made up of some of the oldest rocks on the face of the earth. The Isua greenstone belt in southwestern Greenland contains the oldest known rocks on Earth, dated at 3.7–3.8 billion years old.[3]

The vegetation is generally sparse, with the only patch of forested land being found in Nanortalik Municipality in the extreme south near Cape Farewell.

The climate is arctic to subarctic, with cool summers and cold winters. The terrain is mostly a flat but gradually sloping icecap that covers all land except for a narrow, mountainous, barren, rocky coast. The lowest elevation is sea level and the highest elevation is the summit of Gunnbjørn Fjeld, the highest point in the Arctic at 3,694 meters (12,119 ft). The northernmost point of the Island of Greenland is Cape Morris Jesup, discovered by Admiral Robert Peary in 1909. Natural resources include zinc, lead, iron ore, coal, molybdenum, gold, platinum, uranium, hydropower and fish.

Continuous ice sheet covers 84% of the country; the rest is permafrost. 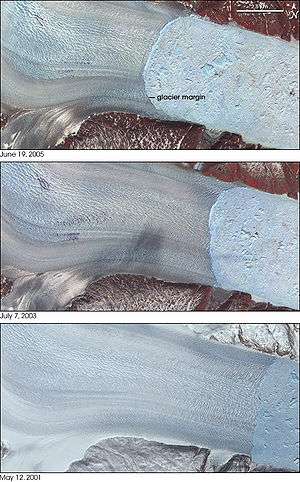 Retreat of the Helheim Glacier, Greenland. 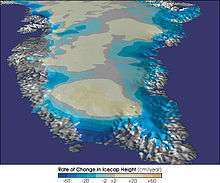 Map of Greenland's rate of change in Ice Sheet Height. 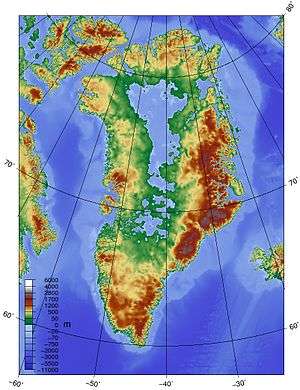 The Greenland ice sheet is 3 kilometers (1.9 mi) thick and broad enough to blanket an area the size of Mexico. The ice is so massive that its weight presses the bedrock of Greenland below sea level and is so all-concealing that not until recently did scientists discover Greenland's Grand Canyon or the possibility that Greenland might actually be three islands.[5]

It is thought that before the Ice Age Greenland had mountainous edges, and a lowland (and probably very dry) center which drained to the sea by one big river flowing out westwards past where Disko Island is now.

Researchers at NASA's Jet Propulsion Laboratory and the University of Kansas reported in February 2006 that the glaciers are melting twice as fast as they were five years ago. By 2005, Greenland was beginning to lose more ice volume than anyone expected – an annual loss of up to 52 cubic miles or 217 cubic kilometres per year, according to more recent satellite gravity measurements released by JPL. The increased ice loss may be partially offset by increased snow accumulation due to increased precipitation.

Recently, Greenland's three largest outlet glaciers have started moving faster, satellite data show. These are the Jakobshavn Isbræ at Ilulissat on the western edge of Greenland, and the Kangerdlugssuaq and Helheim glaciers on the eastern edge of Greenland. The two latter accelerated greatly during the years 2004-2005, but returned to pre-2004 velocities in 2006.[7] The accelerating ice flow has been accompanied by a dramatic increase in seismic activity. In March 2006, researchers at Harvard University and the Lamont-Doherty Earth Observatory at Columbia University reported that the glaciers now generate swarms of earthquakes up to magnitude 5.0.[5]

The retreat of Greenland's ice is revealing islands that were thought to be part of the mainland. In September 2005 Dennis Schmitt discovered an island 400 miles (644 km) north of the Arctic Circle in eastern Greenland which he named Uunartoq Qeqertaq, Inuit for "warming island".[8]

This is a list of the extreme points of Greenland, the points that are farther north, south, east or west than any other location.

Greenland has 18 towns - settlements with more than 500 inhabitants. Nuuk is the largest town - and the capital - with roughly one third of the country's urban population. Sisimiut with approximately 5,500 inhabitants is the second largest town, while Ilulissat is number three with ca. 5,000 inhabitants.