A map of the United States Virgin Islands. 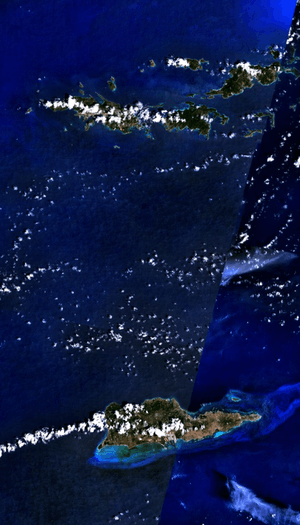 The United States Virgin Islands are a group of several dozen islands and cays located in the Caribbean, about 1,100 miles (1,770 km) southeast of Florida, 600 miles (966 km) north of Venezuela, 40 miles (64 km) east of Puerto Rico, and immediately west and south of the British Virgin Islands.

The U.S. Virgin Islands lie near the boundary of the North American Plate and the Caribbean Plate, roughly 100 miles (161 km) south of the Puerto Rico Trench and near the Anegada Passage, a key shipping lane. Together with the British Virgin Islands, Vieques, and Culebra, they make up the Virgin Islands archipelago.

Charlotte Amalie, Saint Thomas is one of the best natural, deepwater harbors in the Caribbean. The Islands have many well-known beaches, including Magens Bay (Saint Thomas) and Trunk Bay (Saint John), and coral reefs, including the Virgin Islands Coral Reef National Monument and the Buck Island Reef National Monument. More than half of Saint John and nearly all of Hassel Island are owned by the U.S. National Park Service.

Crown Mountain, on Saint Thomas, is the highest point in the U.S. Virgin Islands. Sea level is the lowest.

Comparative area: twice the size of District of Columbia

mostly hilly to rugged and mountainous with little level land