Geography of the Bahamas 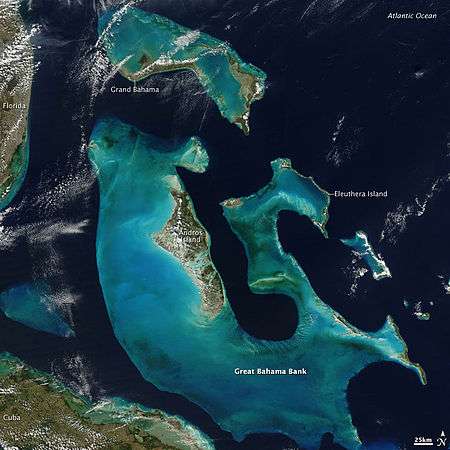 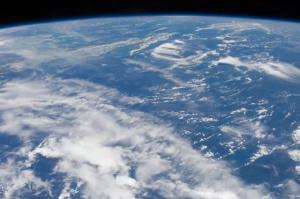 This short video shows the cloudy island of Cuba and the Bahamas as the ISS flies from the Caribbean Sea north-east to the Atlantic Ocean. In the video, you can see Cuba is mostly covered by clouds, but the reefs in the Bahamas stand out quite nicely.

The Bahamas is a group of about 700 atolls and cays in the western Atlantic Ocean, of which only between 30 and 40 are inhabited. The largest of the islands is Andros Island, located 200 kilometres (120 miles) southeast of Florida. The Bimini islands are to its northwest. To the North is the island of Grand Bahama, home to the second-largest city in the country, Freeport. The island of Great Abaco is to its east. In the far south is the island of Great Inagua, the second-largest island in the country. Other notable islands include Eleuthera, Cat Island, San Salvador Island, Acklins, Crooked Island, and Mayaguana. Nassau is the capital and largest city, located on New Providence. The islands have a tropical climate, moderated by the Gulf Stream.

The islands are surface projections of the three oceanic Bahama Banks - the Little Bahama Bank, the Great Bahama Bank, and the westernmost Cay Sal Bank. The highest point is only 63 metres (207 feet) above sea level on Cat Island; the island of New Providence, where the capital city of Nassau is located, reaches a maximum elevation of only thirty-seven meters. The land on the Bahamas has a foundation of fossil coral, but much of the rock is oolitic limestone; the stone is derived from the disintegration of coral reefs and seashells. The land is primarily either rocky or mangrove swamp. Low scrub covers much of the surface area. Pineyards are found on four of the northern islands: Grand Bahama, Great Abaco, New Providence, and Andros. On some of the southern islands, low-growing tropical hardwood flourishes. Although some soil is very fertile, it is also very thin. Only a few freshwater lakes and just one river, located on Andros Island, are found in the Bahamas.

The climate of the archipelago is tropical and has two seasons, summer and winter. During the summer, which extends from May through November, the climate is dominated by warm, moist tropical air masses moving north through the Caribbean. Midsummer temperatures range from 23 to 32 °C (73.4 to 89.6 °F) with a relative humidity of 60 to 100%. In winter months, extending from December through April, the climate is affected by the movement of cold polar masses from North America. Temperatures during the winter months range from 16 to 25 °C (60.8 to 77.0 °F).

While there has never been a freeze reported in the Bahamas, the temperature can fall to 3 °C (37.4 °F) during Arctic outbreaks that affect nearby Florida. Snow has been reported to have mixed with rain in Freeport in January 1977, the same time that it snowed in the Miami area. The temperature was about 5 °C (41 °F) at the time.

Yearly rainfall averages 1,400 millimetres (55 in) and is usually concentrated in the August–October periods. Rainfall often occurs in short-lived, fairly intense showers accompanied by strong gusty winds, which are then followed by rainfalls.

Winds are predominantly easterly throughout the year but tend to become northeasterly from October to April and southeasterly from May to September. These winds seldom exceed twenty-four kilometres per hour except during hurricane season. Although the hurricane season officially lasts from June to November, most hurricanes in the Bahamas occur between July and October. Before a long lull in activity which ended in the 1990s, the last one to strike was Hurricane David in September 1979. Damage was estimated at US$1.8 million and mainly affected agricultural products. The most intense twentieth-century hurricane to strike the Bahamas was the 1929 Bahamas hurricane; winds of up to 230 kilometres per hour (140 mph) were recorded. Many lives were lost, and there was extensive damage to buildings, homes, and boats. 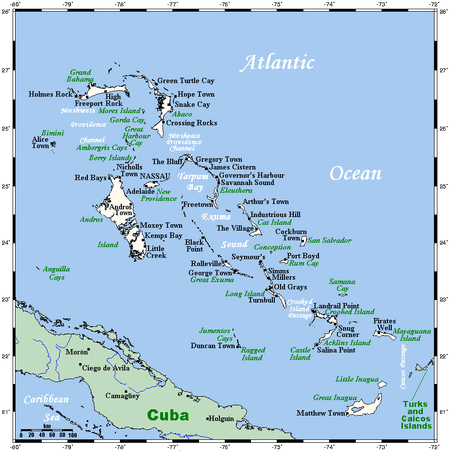 Map of the Bahamas

county comparison to the world: 161

Party to these agreements: