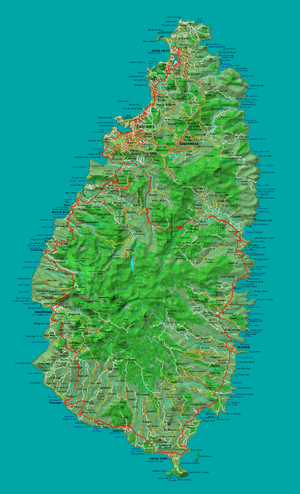 Saint Lucia is one of many small land masses composing the insular group known as the Windward Islands. Unlike large limestone areas such as Florida, Cuba, and the Yucatan Peninsula, or the Bahamas, which is a small island group composed of coral and sand, St. Lucia is a typical Windward Island formation of volcanic rock that came into existence long after much of the region had already been formed.

St. Lucia's physical features are notable. Dominated by high peaks and rain forests in the interior, the 616-square-kilometer (238-square-mile) island is known for the twin peaks of Gros Piton and Petit Piton on the southwestern coast, its soft sandy beaches, and its magnificent natural harbors. Mount Gimie, the highest peak, is located in the central mountain range and rises to 958 meters (3,143 ft) above sea level, a contrast that is also evident in the abrupt climatic transition from coastal to inland areas. The steep terrain also accentuates the many rivers that flow from central St. Lucia to the Caribbean. Fertile land holdings, which support banana farming, are scattered throughout the island.

St. Lucia has a tropical, humid climate moderated by northeast trade winds that allow for pleasant year-round conditions. Mean annual temperatures range from 26 °C (78.8 °F) to 32 °C (89.6 °F) at sea level and drop to an average of 13 °C (55.4 °F) in the mountain peaks. The abundant annual rainfall accumulates to approximately 2,000 millimeters (78.7 in), with most precipitation occurring during the June to December wet season. Hurricanes are the most severe climatic disturbance in this area and have been known to cause extensive damage. Although St. Lucia has historically been spared from serious hurricane destruction, Hurricane Allen decimated the agricultural sector and claimed nine lives in 1980. More recently, in 2010, Hurricane Tomas claimed seven lives and also caused extensive agricultural damage, particularly to the island's burgeoning cocoa crop.

Saint Lucia is in the Caribbean, an island between the Caribbean Sea and [North Atlantic Ocean], north of Saint Vincent and north-west of Barbados. The capital city of Saint Lucia is Castries, where about one third of the population lives. Major towns include Gros Islet, Soufrière and Vieux Fort.

Saint Lucia is in the tropical zone, although its climate is moderated by northeast trade winds. Since it is fairly close to the equator, the temperature does not fluctuate much between winter and summer. The dry season is from December to June, and the rainy season is from June to November. Average daytime temperatures are around 29 °C (84.2 °F), and average nighttime temperatures are around 18 °C (64.4 °F). Average annual rainfall ranges from 1,300 mm (51.2 in) on the coast to 3,810 mm (150 in) in the mountain rainforests.

Volcanic and mountainous with some broad, fertile valleys. 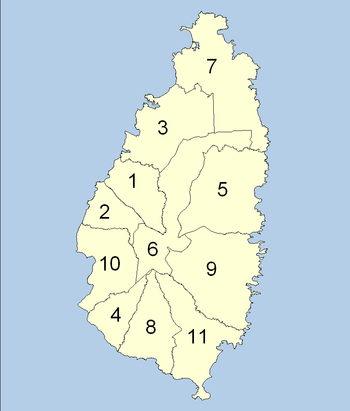 The island of Saint Lucia is divided into 11 quarters:

The island was severely affected by Hurricane Allen in 1980 and Hurricane Tomas in 2010, causing agricultural damage and a drop in visitor arrivals, but Saint Lucia has generally had fewer hurricanes than many other Caribbean islands, due to its southerly location. Hurricanes and volcanoes would both damage the coral.