Air Mobility Command was established on June 1, 1992. It was formed from elements of the inactivated Military Airlift Command (MAC) and Strategic Air Command (SAC). AMC melded a worldwide airlift system (MAC) with a tanker force (SAC) that had been freed from its strategic nuclear strike commitments by the dissolution of the Soviet Union.[1]

Air Mobility Command's mission is to provide global air mobility. The command also plays a crucial role in providing humanitarian support at home and around the world. AMC Airmen...active duty, Air National Guard, and Air Force Reserve, augmented by the civilian airliners and flight crews of the Civil Reserve Air Fleet (CRAF)...provide airlift and aerial refueling for all of the United States' armed forces. Many special duty and operational support aircraft (OSA) and stateside aeromedical evacuation missions are also assigned to AMC.

U.S. forces must be able to provide a rapid, tailored response with a capability to intervene against a well-equipped foe, hit hard and terminate quickly. Rapid global mobility lies at the heart of U.S. strategy in this environment. Without the capability to project forces, there is no conventional deterrent. As the number of U.S. forces stationed overseas continue to decline, global interests remain, making the capabilities AMC can provide even more in demand.

Principal aircraft assets of the command include: C-17 Globemaster III, C-5 Galaxy, C-130 Hercules, KC-135 Stratotanker, KC-10 Extender, C-40 Clipper, C-37 Gulfstream V, and C-21 Learjet. As of 2015, the command is also preparing for the addition of the KC-46 Pegasus. Additional long-range airlift aircraft are available during national emergencies through the Civil Reserve Air Fleet (CRAF), a fleet of commercial aircraft committed to support the transportation of military forces and material in times of crisis.

ANG air mobility units currently operate the C-17, C-130, C-21 and KC-135, but are not assigned to a particular Numbered Air Force. Instead, they report to AMC via the National Guard Bureau (NGB). 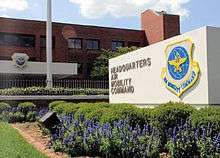 AMC has undergone considerable change since its establishment. Focusing on the core mission of strategic air mobility, the command divested itself of infrastructure and forces not directly related to Global Reach. The Air Rescue Service, intratheater aeromedical airlift forces based overseas and much of the operational support airlift fleet were transferred to other commands. However, all KC-10 Extender and most KC-135 Stratotanker air refueling aircraft initially assigned to Air Combat Command following the disestablishment of Strategic Air Command (SAC) were transferred to AMC, along with Grand Forks AFB, McConnell AFB and Fairchild AFB.[1]

AMC's ability to provide global reach is tested daily. From providing fuel, supplies and aeromedical support to troops on the frontline of the Global War on Terrorism, to providing humanitarian supplies to hurricane, flood, and earthquake victims both at home and abroad, AMC has been engaged in almost nonstop operations since its inception. Command tankers and airlifters have supported peacekeeping and humanitarian efforts in Afghanistan, Bosnia, Iraq, Cambodia, Somalia, Rwanda and Haiti, and continue to play a vital role in the ongoing Global War on Terrorism. The USAF believes that air mobility is a national asset of growing importance for responding to emergencies and protecting national interests around the globe.[1]

The C-17 replaced the C-141 Starlifter fleet inherited from Military Airlift Command (MAC). C-141s were retired as C-17s were accepted into the inventory. First seeing operational service in 1965 under the Military Air Transport Service (MATS), the last Starlifters were retired in the early 2000s. By 2004, the C-141 left AMC service with active duty USAF units, being confined to Air Force Reserve and Air National Guard units for the remainder of its operational service life. In 2004, 2005, and 2006, the C-141s assigned to the 445 AW participated in missions to Iraq and Afghanistan, mostly for the medical evacuation of wounded service members. The last eight C-141s were officially retired in 2006.

The C-5 Galaxy strategic airlifter, also inherited from MAC, is being modernized and upgraded into the C-5M Super Galaxy model. It is planned to modernize all C-5Bs and C-5Cs and many of the C-5As to the C-5M standard. The first C-5M conversion was completed on May 16, 2006, and performed its first flight on June 19, 2006. It is estimated that the modifications will extend the service life of the C-5 to about 2040.

The upgrades of the inherited Strategic Air Command KC-135 Stratotanker to E and R models have extended their lifetimes to 36,000 and 39,000 flying hours, respectively. Acquired by SAC in the late 1950s, according to the Air Force, only a few KC-135s would reach these limits before 2040, but at that time some of the aircraft would be about 80 years old. The Air Force estimates that their current fleet of KC-135s have between 12,000 and 14,000 flying hours on them...only 33 percent of the lifetime flying hour limit...and no KC-135Es will meet the limit until 2040. Therefore, the USAF has decided to replace the KC-135 fleet. However, since there are over 500 KC-135s, these aircraft will be replaced gradually, with the first batch of about 100 aircraft to be replaced in the current buy. The effort to replace the KC-135 has been marked by intense controversy.

The 59 KC-10 Extender tankers, originally acquired in the 1980s by SAC, have been operated largely in the strategic refueling of large number of tactical aircraft on ferry flights and the refueling of other strategic transport aircraft. Conversely, the KC-135 fleet has operated largely in the in-theater tactical role. In an attempt to modernize the platform, the USAF has awarded Boeing a US$216 million contract to upgrade its fleet of 59 aircraft with new communication, navigation, surveillance and air traffic management system to operate into the 2020s.

Legacy models of the C-130 Hercules (e.g., C-130E, C-130H, C-130H2) in AMC and AFRC and ANG units operationally-gained by AMC will eventually be replaced by the C-130J Super Hercules. The C-130 family has the longest continuous production run of any military aircraft in history and has served in every branch of the U.S. armed forces other than the U.S. Army. During more than 50 years of service, the C-130 has participated in military, civilian and humanitarian aid operations. It is likely that future improvements to the C-130 will mean the design will be in service into the foreseeable future.