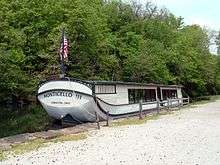 Coshocton /kəˈʃɒktən/[6] is a city in and the county seat of Coshocton County, Ohio, United States.[7] The population was 11,216 at the 2010 census. The Walhonding River and the Tuscarawas River meet in Coshocton to form the Muskingum River.

Coshocton contains Roscoe Village, a restored town of the canal era, located next to the former Ohio and Erie Canal. A heritage tourist attraction, it showcases the area's unique canal history. The city was developed on the site of a former Lenape village established in the late 1770s by bands who had migrated from the East under European pressure.

Under pressure from European-American colonists, Lenape had moved west across the Appalachians and into Ohio. By the late 1770s, Coshocton had become the principal Lenape (Delaware) village in the Ohio Country. Many Lenape had been forced to cede their lands in Pennsylvania and New Jersey, and had migrated to Ohio Country from their traditional territory on the East Coast. In addition, they were under pressure by warfare from the Iroquois pressing down from their traditional base in present-day New York because of competition in the fur trade.

Chief Newcomer founded Coshocton, moving his people west from their former principal settlement of Gekelmukpechunk (called Newcomerstown after the chief by the few white traders and settlers there.) Most of the latter's Lenape population of 700 followed Newcomer. Coshocton was across the Tuscarawas River from Conchake, the former site of a Wyandot village. By then the Wyandot had migrated northwest, in part of a movement of numerous tribes. The name Coshocton derives from Lenape Koshaxkink, 'where there is a river crossing,' altered to Koshaxktun 'ferry' (river-crossing device).

The western Lenape were split in their alliances during the American Revolutionary War. Those who allied with the British moved further west to the Sandusky River area, closer to the British Fort Detroit. From there the British and Lenape raided colonial frontier settlements.

The Lenape sympathetic to the new United States stayed near Coshocton. Chief Newcomer signed the Fort Pitt Treaty of 1778, by which the Lenape hoped to secure their safety during the War, and he promised scouts and support to the rebel colonists. They also hoped to lay the base for a Native American state in the new nation.

In retaliation for frontier raids by hostile Lenape and British, Colonel Daniel Brodhead of the American militia ignored the treaty. He attacked and destroyed the Lenape at Coshocton in April 1781.[8]

After the Revolutionary War, the Ohio Country was opened to European-American settlement. They were mostly farmers in the early years. Additional development and greater trade accompanied the opening of the Erie Canal in 1824 across New York State. It provided transportation for farm commodities to eastern markets via the Great Lakes, the canal and the Hudson River, to the port of New York.

Coshocton was originally called Tuscarawas by American colonists, after the river, and under the latter name was laid out in 1802. The young town was renamed Coshocton when it was designated county seat by the legislature in 1811.[9]

To improve their transportation of goods and people, residents of Ohio supported construction of the Ohio and Erie Canal. This enabled the transport of coal mined in the region, which was its most important resource commodity. In addition, the canal supported transport of goods manufactured by local industries that developed in the 19th century with the availability of coal.

There were 4,872 households of which 27.1% had children under the age of 18 living with them, 42.5% were married couples living together, 13.1% had a female householder with no husband present, 4.5% had a male householder with no wife present, and 39.9% were non-families. 34.9% of all households were made up of individuals and 17.9% had someone living alone who was 65 years of age or older. The average household size was 2.25 and the average family size was 2.85.

There were 5,048 households out of which 28.0% had children under the age of 18 living with them, 48.5% were married couples living together, 10.8% had a female householder with no husband present, and 37.4% were non-families. 33.5% of all households were made up of individuals and 17.7% had someone living alone who was 65 years of age or older. The average household size was 2.27 and the average family size was 2.87.

Coshocton lies in a coal-producing region. The nearby Conesville Power Plant uses this coal to generate power. Strip mining is a by-product of this industry.

In addition, the region has a history of agriculture, with both strawberries and apples available for local picking in summer and fall, respectively.

One of the industries in Coshocton included Shaw-Barton. Other industries included General Electric, the laminated products division; Edmont-Wilson, Pretty Products, Clows, WestRock, and St. Regis. Due to industrial restructuring in the late 20th century, a number of these industries have closed.

Since that period, tourism and water recreation have grown as part of the economy. The area was developed at the confluence of the Tuscarawas and Walhonding rivers, giving rise to the Muskingum River. Lake Park and Forest Hill Lake are nearby. The restored canal, part of the nearby historic Roscoe Village, is another heritage tourism attraction.

Coshocton is served by two print newspapers, The Coshocton Tribune, a daily, and The Coshocton Beacon, published weekly. Coshocton is also home to WTNS radio, an adult contemporary station operating on FM frequency 99.3, as well as a religious station, WHVY on 89.5.