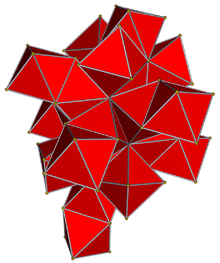 In geometry, the 24-cell is the convex regular 4-polytope (four-dimensional analogue of a Platonic solid) with Schläfli symbol {3,4,3}. It is also called C24, icositetrachoron, octaplex (short for "octahedral complex"), icosatetrahedroid,[1] octacube, hyper-diamond or polyoctahedron, being constructed of octahedral cells.

The boundary of the 24-cell is composed of 24 octahedral cells with six meeting at each vertex, and three at each edge. Together they have 96 triangular faces, 96 edges, and 24 vertices. The vertex figure is a cube. The 24-cell is self-dual. In fact, the 24-cell is the unique convex self-dual regular Euclidean polytope which is neither a polygon nor a simplex. Due to this singular property, it does not have a good analogue in 3 dimensions.

A 24-cell is given as the convex hull of its vertices. The vertices of a 24-cell centered at the origin of 4-space, with edges of length 1, can be given as follows: 8 vertices obtained by permuting

and 16 vertices of the form

The first 8 vertices are the vertices of a regular 16-cell and the other 16 are the vertices of the dual tesseract. This gives a construction equivalent to cutting a tesseract into 8 cubical pyramids, and then attaching them to the facets of a second tesseract. This is equivalent to the dual of a rectified 16-cell. The analogous construction in 3-space gives the rhombic dodecahedron which, however, is not regular. 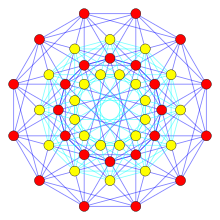 The 24 vertices of the 24-cell (red nodes), and of its dual (yellow nodes), represent the 48 root vectors of the F4 group, as shown in this F4 Coxeter plane projection

The 48 vertices (or strictly speaking their radius vectors) of the union of the 24-cell and its dual form the root system of type F4. The 24 vertices of the original 24-cell form a root system of type D4; its size has the ratio √2:1. This is likewise true for the 24 vertices of its dual. The full symmetry group of the 24-cell is the Weyl group of F4, which is generated by reflections through the hyperplanes orthogonal to the F4 roots. This is a solvable group of order 1152. The rotational symmetry group of the 24-cell is of order 576.

Vertices of other convex regular 4-polytopes also form multiplicative groups of quaternions, but few of them generate a root lattice.

It is interesting to note that the unit balls inscribed in the 24-cells of the above tessellation give rise to the densest lattice packing of hyperspheres in 4 dimensions. The vertex configuration of the 24-cell has also been shown to give the highest possible kissing number in 4 dimensions. 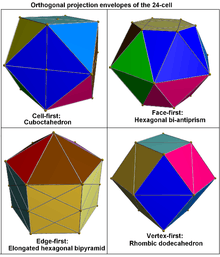 Projection envelopes of the 24-cell. (Each cell is drawn with different colored faces, inverted cells are undrawn)

The vertex-first perspective projection of the 24-cell into 3-dimensional space has a tetrakis hexahedral envelope. The layout of cells in this image is similar to the image under parallel projection.

The following sequence of images shows the structure of the cell-first perspective projection of the 24-cell into 3 dimensions. The 4D viewpoint is placed at a distance of five times the vertex-center radius of the 24-cell.

There are two lower symmetry forms of the 24-cell, derived as a rectified 16-cell, with B4 or [3,3,4] symmetry drawn bicolored with 8 and 16 octahedral cells. Lastly it can be constructed from D4 or [31,1,1] symmetry, and drawn tricolored with 8 octahedra each.

The 24-cell consists of 24 octahedral cells. For visualization purposes, it is convenient that the octahedron has opposing parallel faces (a trait it shares with the cells of the tesseract and the 120-cell). One can stack octahedrons face to face in a straight line bent in the 4th direction into a great circle with a circumference of 6 cells. The cell locations lend themselves to a hyperspherical description. Pick an arbitrary cell and label it the "North Pole". Eight great circle meridians (two cells long) radiate out in 3 dimensions, converging at the 3rd "South Pole" cell. This skeleton accounts for 18 of the 24 cells (2 + 8×2). See the table below.

There is another related great circle in the 24-cell, the dual of the one above. A path that traverses 6 vertices solely along edges, resides in the dual of this polytope, which is itself since it is self dual. One can easily follow this path in a rendering of the equatorial cuboctahedron cross-section.

Starting at the North Pole, we can build up the 24-cell in 5 latitudinal layers. With the exception of the poles, each layer represents a separate 2-sphere, with the equator being a great 2-sphere. The cells labeled equatorial in the following table are interstitial to the meridian great circle cells. The interstitial "equatorial" cells touch the meridian cells at their faces. They touch each other, and the pole cells at their vertices. This latter subset of eight non-meridian and pole cells has the same relative position to each other as the cells in a tesseract (8-cell), although they touch at their vertices instead of their faces. 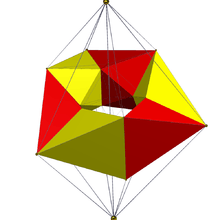 An edge-center perspective projection, showing one of four rings of 6 octahedra around the equator

The 24-cell can be partitioned into disjoint sets of four of these 6-cell great circle rings, forming a discrete Hopf fibration of four interlocking rings. One ring is "vertical", encompassing the pole cells and four meridian cells. The other three rings each encompass two equatorial cells and four meridian cells, two from the northern hemisphere and two from the southern.

Note this hexagon great circle path implies the interior/dihedral angle between adjacent cells is 180 - 360/6 = 120 degrees. This suggests you can adjacently stack exactly three 24-cells in a plane and form a 4-D honeycomb of 24-cells as described previously.

One can also follow a great circle route, through the octahedrons' opposing vertices, that is four cells long. This corresponds to traversing diagonally through the squares in the cuboctahedron cross-section. The 24-cell is the only regular polytope in more than two dimensions where you can traverse a great circle purely through opposing vertices (and the interior) of each cell. This great circle is self dual. This path was touched on above regarding the set of 8 non-meridian (equatorial) and pole cells. The 24-cell can be equipartitioned into three 8-cell subsets, each having the organization of a tesseract. Each of these subsets can be further equipartitioned into two interlocking great circle chains, four cells long. Collectively these three subsets now produce another, six ring, discrete Hopf fibration.

Several uniform 4-polytopes can be derived from the 24-cell via truncation:

The 96 edges of the 24-cell can be partitioned into the golden ratio to produce the 96 vertices of the snub 24-cell. This is done by first placing vectors along the 24-cell's edges such that each two-dimensional face is bounded by a cycle, then similarly partitioning each edge into the golden ratio along the direction of its vector. An analogous modification to an octahedron produces an icosahedron, or "snub octahedron."

The 24-cell is the unique convex self-dual regular Euclidean polytope that is neither a polygon nor a simplex. Relaxing the condition of convexity admits two further figures: the great 120-cell and grand stellated 120-cell.

The 24-cell can also be derived as a rectified 16-cell: