For the sequence of fifth element numbers of Pascal's triangle, see Pentatope number. 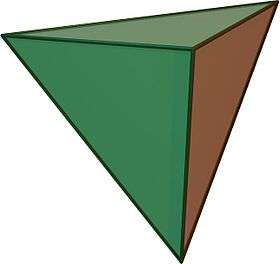 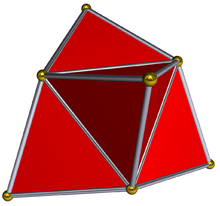 The regular 5-cell is bounded by regular tetrahedra, and is one of the six regular convex 4-polytopes, represented by Schläfli symbol {3,3,3}.

The 5-cell is self-dual, and its vertex figure is a tetrahedron. Its maximal intersection with 3-dimensional space is the triangular prism. Its dihedral angle is cos−1(1/4), or approximately 75.52°.

The 5-cell can be constructed from a tetrahedron by adding a 5th vertex such that it is equidistant from all the other vertices of the tetrahedron. (The 5-cell is essentially a 4-dimensional pyramid with a tetrahedral base.)

The Cartesian coordinates of the vertices of an origin-centered regular 5-cell having edge length 2 are:

Another set of origin-centered coordinates in 4-space can be seen as a hyperpyramid with a regular tetrahedral base in 3-space, with edge length 2√2:

A 5-cell can be constructed as a Boerdijk–Coxeter helix of five chained tetrahedra, folded into a 4-dimensional ring. The 10 triangle faces can be seen in a 2D net within a triangular tiling, with 6 triangles around every vertex, although folding into 4-dimensions causes edges to coincide. The purple edges represent the Petrie polygon of the 5-cell.

The A4 Coxeter plane projects the 5-cell into a regular pentagon and pentagram.

There are many lower symmetry forms, including these found in uniform polytope vertex figures:

Other uniform 5-polytopes have irregular 5-cell vertex figures. The symmetry of a vertex figure of a uniform polytope is represented by removing the ringed nodes of the Coxeter diagram.

The compound of two 5-cells in dual configurations can be seen in this A5 Coxeter plane projection, with a red and blue 5-cell vertices and edges. This compound has [[3,3,3]] symmetry, order 240. The intersection of these two 5-cells is a uniform birectified 5-cell. 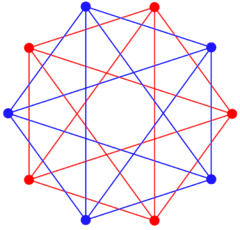 The pentachoron (5-cell) is the simplest of 9 uniform polychora constructed from the [3,3,3] Coxeter group.