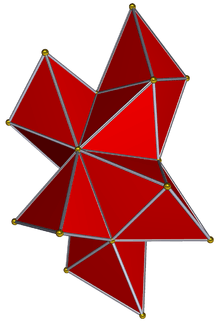 It is bounded by 16 cells, all of which are regular tetrahedra. It has 32 triangular faces, 24 edges, and 8 vertices. The 24 edges bound 6 squares lying in the 6 coordinate planes.

The 16-cell can be decomposed into two similar disjoint circular chains of eight tetrahedrons each, four edges long. Each chain, when stretched out straight, forms a Boerdijk–Coxeter helix. This decomposition can be seen in a 4-4 duoantiprism construction of the 16-cell:

The 16-cell can be dissected into two octahedral pyramids, which share a new octahedron base through the 16-cell center.

A 16-cell can constructed from two Boerdijk–Coxeter helixes of eight chained tetrahedra, each folded into a 4-dimensional ring. The 16 triangle faces can be seen in a 2D net within a triangular tiling, with 6 triangles around every vertex. The purple edges represent the Petrie polygon of the 16-cell. 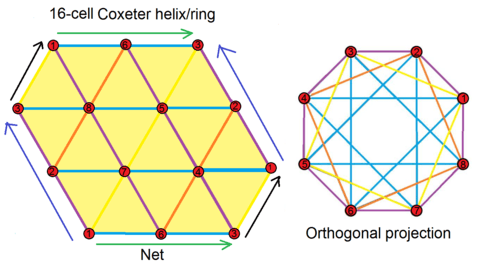 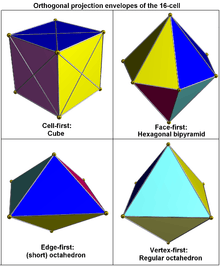 Projection envelopes of the 16-cell. (Each cell is drawn with different color faces, inverted cells are undrawn)

The cell-first parallel projection of the 16-cell into 3-space has a cubical envelope. The closest and farthest cells are projected to inscribed tetrahedra within the cube, corresponding with the two possible ways to inscribe a regular tetrahedron in a cube. Surrounding each of these tetrahedra are 4 other (non-regular) tetrahedral volumes that are the images of the 4 surrounding tetrahedral cells, filling up the space between the inscribed tetrahedron and the cube. The remaining 6 cells are projected onto the square faces of the cube. In this projection of the 16-cell, all its edges lie on the faces of the cubical envelope.

The vertex-first parallel projection of the 16-cell into 3-space has an octahedral envelope. This octahedron can be divided into 8 tetrahedral volumes, by cutting along the coordinate planes. Each of these volumes is the image of a pair of cells in the 16-cell. The closest vertex of the 16-cell to the viewer projects onto the center of the octahedron.

The usual projection of the 16-cell

and 4 intersecting spheres (a Venn diagram of 4 sets) form topologically the same object in 3D-space:

There is a lower symmetry form of the 16-cell, called a demitesseract or 4-demicube, a member of the demihypercube family, and represented by h{4,3,3}, and Coxeter diagrams

. It can be drawn bicolored with alternating tetrahedral cells.

It can also be seen in lower symmetry form as a tetrahedral antiprism, constructed by 2 parallel tetrahedra in dual configurations, connected by 8 (possibly elongated) tetrahedra. It is represented by s{2,4,3}, and Coxeter diagram:

With the tesseract constructed as a 4-4 duoprism, the 16-cell can be seen as its dual, a 4-4 duopyramid.

The Möbius–Kantor polygon is a regular complex polygon 3{3}3,

The regular 16-cell along with the tesseract exist in a set of 15 uniform 4-polytopes with the same symmetry. It is also a part of the uniform polytopes of D4 symmery.

This 4-polytope is also related to the cubic honeycomb, order-4 dodecahedral honeycomb, and order-4 hexagonal tiling honeycomb which all have octahedral vertex figures.

It is first in a sequence of quasiregular polytopes and honeycombs h{4,p,q}, and a half symmetry sequence, for regular forms {p,3,4}.