In geometry, the 600-cell is the convex regular 4-polytope (four-dimensional analogue of a Platonic solid) with Schläfli symbol {3,3,5}. It is also called a C600, hexacosichoron and hexacosidedroid.[1]

Its boundary is composed of 600 tetrahedral cells with 20 meeting at each vertex. Together they form 1200 triangular faces, 720 edges, and 120 vertices. The edges form 72 flat regular decagons. Each vertex of the 600-cell is a vertex of six such decagons.

The mutual distances of the vertices, measured in degrees of arc on the circumscribed hypersphere, only have the values 36° =

and 8 vertices obtained from

by permuting coordinates. The remaining 96 vertices are obtained by taking even permutations of

When interpreted as quaternions, the 120 vertices of the 600-cell form a group under quaternionic multiplication. This group is often called the binary icosahedral group and denoted by 2I as it is the double cover of the ordinary icosahedral group I. It occurs twice in the rotational symmetry group RSG of the 600-cell as an invariant subgroup, namely as the subgroup 2IL of quaternion left-multiplications and as the subgroup 2IR of quaternion right-multiplications. Each rotational symmetry of the 600-cell is generated by specific elements of 2IL and 2IR; the pair of opposite elements generate the same element of RSG. The centre of RSG consists of the non-rotation Id and the central inversion -Id. We have the isomorphism RSG ≅ (2IL × 2IR) / {Id, -Id}. The order of RSG equals 120 × 120 / 2 = 7200.

The binary icosahedral group is isomorphic to SL(2,5).

The symmetries of the 3-D surface of the 600-cell are somewhat difficult to visualize due to both the large number of tetrahedral cells, and the fact that the tetrahedron has no opposing faces or vertices. One can start by realizing the 600-cell is the dual of the 120-cell. One may also notice that the 600-cell also contains the vertices of a dodecahedron, which with some effort can be seen in most of the below perspective projections.

A three-dimensional model of the 600-cell, in the collection of the Institut Henri Poincaré, was photographed in 1934–1935 by Man Ray, and formed part of two of his later "Shakesperean Equation" paintings.[4] 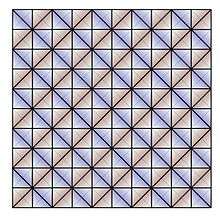 The 120-cell can be decomposed into two disjoint tori. Since it is the dual of the 600-cell, this same dual tori structure exists in the 600-cell, although it is somewhat more complex. The 10-cell geodesic path in the 120-cell corresponds to a 10-vertex decagon path in the 600-cell. Start by assembling five tetrahedra around a common edge. This structure looks somewhat like an angular "flying saucer". Stack ten of these, vertex to vertex, "pancake" style. Fill in the annular ring between each "saucer" with 10 tetrahedra forming an icosahedron. You can view this as five, vertex stacked, icosahedral pyramids, with the five extra annular ring gaps also filled in. The surface is the same as that of ten stacked pentagonal antiprisms. You now have a torus consisting of 150 cells, ten edges long, with 100 exposed triangular faces, 150 exposed edges, and 50 exposed vertices. Stack another tetrahedron on each exposed face. This will give you a somewhat bumpy torus of 250 cells with 50 raised vertices, 50 valley vertices, and 100 valley edges. The valleys are 10 edge long closed paths and correspond to other instances of the 10-vertex decagon path mentioned above. These paths spiral around the center core path, but mathematically they are all equivalent. Build a second identical torus of 250 cells that interlinks with the first. This accounts for 500 cells. These two tori mate together with the valley vertices touching the raised vertices, leaving 100 tetrahedral voids that are filled with the remaining 100 tetrahedra that mate at the valley edges. This latter set of 100 tetrahedra are on the exact boundary of the duocylinder and form a clifford torus. They can be "unrolled" into a square 10x10 array. Incidentally this structure forms one tetrahedral layer in the tetrahedral-octahedral honeycomb.

There are exactly 50 "egg crate" recesses and peaks on both sides that mate with the 250 cell tori. In this case into each recess, instead of an octahedron as in the honeycomb, fits a triangular bipyramid composed of two tetrahedra.

The 600-cell can be further partitioned into 20 disjoint intertwining rings of 30 cells and ten edges long each, forming a discrete Hopf fibration. These chains of 30 tetrahedra each form a Boerdijk–Coxeter helix. Five such helices nest and spiral around each of the 10-vertex decagon paths, forming the initial 150 cell torus mentioned above.

This decomposition of the 600-cell has symmetry [[10,2+,10]], order 400, the same symmetry as the grand antiprism. The grand antiprism is just the 600-cell with the two above 150-cell tori removed, leaving only the single middle layer of tetrahedra, similar to the belt of an icosahedron with the 5 top and 5 bottom triangles removed (pentagonal antiprism).

The H3 decagonal projection shows the plane of the van Oss polygon. 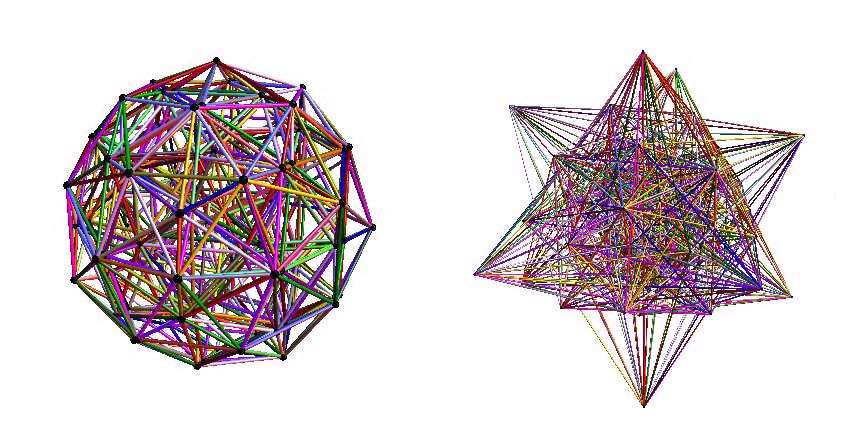 The snub 24-cell may be obtained from the 600-cell by removing the vertices of an inscribed 24-cell and taking the convex hull of the remaining vertices. This process is a diminishing of the 600-cell.

The grand antiprism may be obtained by another diminishing of the 600-cell: removing 20 vertices that lie on two mutually orthogonal rings and taking the convex hull of the remaining vertices.

A bi-24-diminished 600-cell, with all tridiminished icosahedron cells has 48 vertices removed, leaving 72 of 120 vertices of the 600-cell.

This 4-polytope is a part of a sequence of 4-polytope and honeycombs with icosahedron vertex figures: