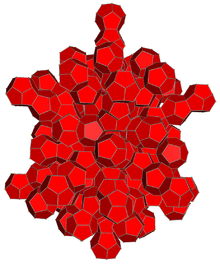 In geometry, the 120-cell is the convex regular 4-polytope with Schläfli symbol {5,3,3}. It is also called a C120, hecatonicosachoron, dodecacontachoron and hecatonicosahedroid.[1]

The boundary of the 120-cell is composed of 120 dodecahedral cells with 4 meeting at each vertex.

and all even permutations of

The 120-cell consists of 120 dodecahedral cells. For visualization purposes, it is convenient that the dodecahedron has opposing parallel faces (a trait it shares with the cells of the tesseract and the 24-cell). One can stack dodecahedrons face to face in a straight line bent in the 4th direction into a great circle with a circumference of 10 cells. Starting from this initial ten cell construct there are two common visualizations one can use: a layered stereographic projection, and a structure of intertwining rings.

The cell locations lend themselves to a hyperspherical description. Pick an arbitrary cell and label it the "North Pole". Twelve great circle meridians (four cells long) radiate out in 3 dimensions, converging at the 5th "South Pole" cell. This skeleton accounts for 50 of the 120 cells (2 + 4*12).

Starting at the North Pole, we can build up the 120-cell in 9 latitudinal layers, with allusions to terrestrial 2-sphere topography in the table below. With the exception of the poles, each layer represents a separate 2-sphere, with the equator being a great 2-sphere. The centroids of the 30 equatorial cells form the vertices of an icosidodecahedron, with the meridians (as described above) passing through the center of each pentagonal face. The cells labeled "interstitial" in the following table do not fall on meridian great circles. 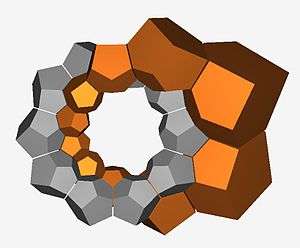 Two intertwining rings of the 120-cell. 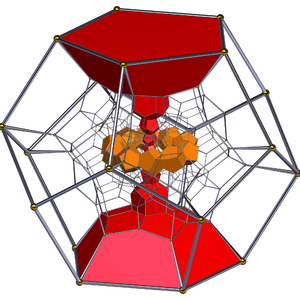 The 120-cell can be partitioned into 12 disjoint 10-cell great circle rings, forming a discrete/quantized Hopf fibration. Starting with one 10-cell ring, one can place another ring alongside it that spirals around the original ring one complete revolution in ten cells. Five such 10-cell rings can be placed adjacent to the original 10-cell ring. Although the outer rings "spiral" around the inner ring (and each other), they actually have no helical torsion. They are all equivalent. The spiraling is a result of the 3-sphere curvature. The inner ring and the five outer rings now form a six ring, 60-cell solid torus. One can continue adding 10-cell rings adjacent to the previous ones, but it's more instructive to construct a second torus, disjoint from the one above, from the remaining 60 cells, that interlocks with the first. The 120-cell, like the 3-sphere, is the union of these two (Clifford) tori. If the center ring of the first torus is a meridian great circle as defined above, the center ring of the second torus is the equatorial great circle that is centered on the meridian circle. Also note that the spiraling shell of 50 cells around a center ring can be either left handed or right handed. It's just a matter of partitioning the cells in the shell differently, i.e. picking another set of disjoint great circles.

Orthogonal projections of the 120-cell can be done in 2D by defining two orthonormal basis vectors for a specific view direction.

The H3 decagonal projection shows the plane of the van Oss polygon.

3-dimensional orthogonal projections can also be made with three orthonormal basis vectors, and displayed as a 3d model, and then projecting a certain perspective in 3D for a 2d image.

These projections use perspective projection, from a specific view point in four dimensions, and projecting the model as a 3D shadow. Therefore faces and cells that look larger are merely closer to the 4D viewpoint. Schlegel diagrams use perspective to show four-dimensional figures, choosing a point above a specific cell, thus making the cell as the envelope of the 3D model, and other cells are smaller seen inside it. Stereographic projection use the same approach, but are shown with curved edges, representing the polytope a tiling of a 3-sphere.

A comparison of perspective projections from 3D to 2D is shown in analogy.

It is similar to three regular 4-polytopes: the 5-cell {3,3,3}, tesseract {4,3,3}, of Euclidean 4-space, and hexagonal tiling honeycomb of hyperbolic space. All of these have a tetrahedral vertex figure.

This honeycomb is a part of a sequence of 4-polytopes and honeycombs with dodecahedral cells: