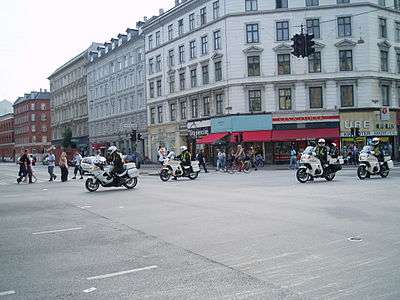 Crime in Denmark is combated by the Danish Police and other agencies.

According to the Corruption Perceptions Index 2012 from Transparency International,[2] Denmark together with Finland and New Zealand, are the World's most transparent countries. Transparency International's Global Corruption Barometer 2013 shows that the public does not consider corruption a major problem in Danish society, and bribes paid to access public benefits and services are virtually non-existent.[3]

Glostrup, a blue-collar suburb in Copenhagen ranked as the most violent place in Denmark in 2009.[5] The place with the fewest instances of reported violence was Christiansø, a tiny island north east of Bornholm.[5]

In May 2011, Denmark temporarily resumed checks along its borders with Germany and Sweden, previously open under the EU's Schengen zone agreement.[7][8] The Danish government says the resumption of border checks is needed to help prevent cross-border crime, illegal immigration and drug trafficking.[7][8]