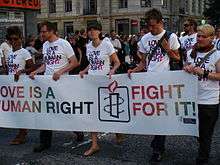 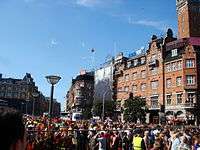 The rights of lesbians, gays, bisexuals, and transgender (LGBT) persons in Denmark are some of the most extensive in the world and a high priority.

Same-sex sexual activity was legalized in 1933, and since 1977, the age of consent is 15, regardless of sexual orientation or gender.[1] Denmark was the first country in the world to grant legal recognition to same-sex unions, in the form of "registered partnerships", in 1989. On 7 June 2012, the law was replaced by a new same-sex marriage law, which came into effect on 15 June 2012,[2] and Denmark recognizes same-sex marriages performed elsewhere. Discrimination on the grounds of sexual orientation was entirely prohibited in 2004. Same-sex couples are allowed to jointly adopt since 2010, while previously allowing stepchild adoptions and limited co-guardianship rights for non-biological parents. Gays and lesbians are also allowed to serve openly in the military.

Like its Scandinavian neighbours, Denmark has become one of the most socially liberal countries in the world, with recent polls indicating that a large majority of Danes support same-sex marriage and LGBT adoption.[3] Copenhagen, the capital, has frequently been referred to by publishers as one of the most gay friendly cities in the world,[4] famous for its annual Pride Parade.

Same-sex sexual activity was legalized in 1933, and since 1977, the age of consent is 15, regardless of sexual orientation or gender.[1]

Registered partnerships (registreret partnerskab) were created by a law enacted on 7 June 1989, the world's first such law, and came into force on 1 October 1989.[6][7] Registered partnerships had almost all the same qualities as marriage; all legal and fiscal rights and obligations were like those of opposite-sex marriage, with the major exception being that regulations by international treaties did not apply unless all signatories agree.

Same-sex marriage became legal in Denmark on 15 June 2012, after the Danish Parliament voted on 7 June in favour of gender-neutral marriage, including marriages in the Church of Denmark.[2][8]

The Danish government proposed marriage equality legislation in Parliament on 14 March 2012. Parliament passed the bill, and royal assent was granted three days later. The law entered into force on 15 June 2012.[9] The proposed legislation removes almost all discrimination in current law, leaving only a few gender-specific articles.[10]

Since 1999, a person in a same-sex registered partnership has been able to adopt his or her partner's biological children (known as a "stepchild adoption").[11][12] Adoption by LGBT parents was previously only permitted in certain restricted situations, notably when a previous connection exists between the adopting parent and the child, such as being a family member or a foster child.

On 2 June 2006, the Danish parliament voted to repeal a law that since 1997 had banned lesbians from artificial insemination, giving lesbians more parental rights to genetically have children. Also, the other partner who is not the biological parent of the child is written onto the birth certificate as the other natural parent.[16]

Openly gay, lesbian, and bisexual soldiers serve without hindrance in all branches of the Danish Defence. Discrimination against gay, lesbian, and bisexual soldiers in recruitment, placement and promotion is prohibited in Denmark.[17] There are prominent openly gay military leaders in the Defence and there are no reported cases of threats to gays, morale, or national security.[18] A study of the conditions for gay men indicates that gay men in the Danish Defence show strength and are respected.[19]

Danish law includes protections against discrimination based on sexual orientation and gender identity/expression.[20][21]

Danish law includes hate crimes legislation, which adds extra penalties for crimes committed against people because of their sexuality and for their gender identity or form of gender expression.[20]

In February 2013, a Guatemalan became the first transgender person to be granted asylum in Denmark because of persecution in her native country.[22] However, she was put in a facility for men, where she had been assaulted several times and was initially refused. They reopened the case when LGBT Denmark proved her life would be in danger if she returned to Guatemala.[23]

In June 2014, the Danish parliament voted 59-52 to remove the requirement of diagnosis with a mental disorder and surgery with irreversible sterilization during the process of a legal sex change. This makes Denmark the first European country to remove the Gender Identity Disorder diagnosis as a necessary requirement in the gender recognition process.[24] Since 1 September 2014, Danes over 18 years old who wish to apply for a legal sex change can do so by stating that they want to change their documentation, followed by a six-month-long "reflection period" to confirm the request.[25][26]

Pending a decision by the World Health Organization to remove transgender gender identity from its list of mental illnesses, Denmark initially postponed a unilateral change. Citing a lack of progress at the WHO, the Danish parliament decided to remove transgender gender identity from the National Board of Health's list of mental illnesses in 2016. The change will come into effect on 1 January 2017.[27] It was the second European country to do this, after France which introduced a similar legislation in 2010.[28]

In May 2014, six Danish political parties called on Health Minister Nick Hækkerup to lift the ban that prohibits gay and bi men from being allowed to donate blood.[29][30]

In August 2016, it was reported that a majority of MPs in Parliament support lifting the ban. The Danish People's Party, the Social Democrats and the Alternative all support a proposal put forward by Danish Social Liberal Party leader Morten Østergaard, who wants to lift the country’s ban on gay and bi men donating blood.[31]

A December 2006 European Union member poll showed Danish support for same-sex marriage at 69 percent.[32] Angus Reid Global Monitor conducted the poll for issues regarding European Union integration. With the attitudes in Europe regarding the legalization of same-sex marriage, Denmark proved to be high on the list of possible nations that would grant marriage to gay and lesbian citizens, in third place behind The Netherlands (82 percent) and Sweden (71 percent).

A 2015 Eurobarometer found that 87% of Danes thought that same-sex marriage should be allowed throughout Europe. Additionally, in that same poll, 90% thought that lesbian, gay and bisexual people should have the same rights as heterosexuals, and 88% agreed that there is nothing wrong about a sexual relationship between two people of the same sex.[33]

Rights of LGBT people in Denmark (excluding the autonomous countries of Greenland and the Faroe Islands):

Summary by territories of the Kingdom of Denmark