Sport in Denmark is diverse. The national sport is football[2] with the most notable results being qualifying for the European Championships six times in a row (1984–2004) and winning the Championship in 1992. Other significant achievements include winning the Confederations Cup in 1995 and reaching the quarter final of the 1998 World Cup. Other popular sports include handball, cycling, sailing sports, badminton, ice hockey, swimming and recently also golf. A few youths also play Basketball.

Sport is encouraged in school, and there are local sports clubs in all cities and most towns.

The national stadium for football is the Parken Stadium. 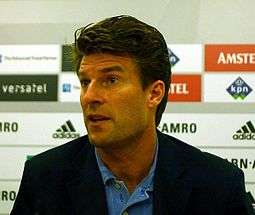 Football is the most popular sport in Denmark, with over 313,000 players in more than 1600 clubs.[1] The national football team in Denmark have reached high and notable results, like qualifying for the European Championships six times in a row (1984–2004) and winning the UEFA Championship in 1992. Other significant achievements include winning the Confederations Cup in 1995 and reaching the quarter final of the 1998 World Cup.

The top-league in Danish football is called The Danish Superliga. The reigning champions are F.C. Copenhagen, while they are also the most successful club ever in financial terms. Famous Superliga players include Per Nielsen, Jimmy Nielsen, Michael Hansen, Mogens Krogh, Daniel Agger and Jesper Grønkjær.

The second level league is the Danish 1st Division, which was last won by Lyngby Boldklub. The third tier is made up of the two Danish 2nd Divisions: East and West. The last two champions were NordVest (East) and Blokhus FC (West). The fourth tier is the Denmark Series, which is split into three pools. The last champions were BK Marienlyst, IF Skjold Birkerød and Kjellerup IF.

The top women's league is the Elitedivisionen, most recently won by Fortuna Hjørring. HEI Aarhus are the most successful team, with 10 titles.

The premier cup competition is the Danish Cup, won in 2016 by F.C. Copenhagen. AGF are 9 time champions. Copenhagen are also the last winners of the Danish Supercup, back in 2004, of which Brøndby IF are the most successful club. Brøndby are the only winners of the twice-held Danish League Cup.

The Danish Women's Cup has been won the last three times in a row by Brøndby IF, and seven times overall by Fortuna Hjørring.

Golf has become a highly popular sport in recent years in Denmark with more than 180 courses across the country.

Golf is mostly popular among the older demographic, with more members over the age of 24 than any other sport in Denmark.[1]

In pro golf, Thomas Bjørn has dominated the Danish scene for many years, along with Anders Hansen, Søren Hansen and Steen Tinning on the European Tour. On the Ladies European Tour, Iben Tinning is the most successful Danish player.

Denmark has a long history with handball, with the sport originating from Denmark. Handball is one of the most popular pastimes in Denmark, only exceeded by e.g. football. There are over 146.000 licensed handball players in Denmark. Both the male, and female national teams have reached high international rankings.

Denmark's national team had a few strong showings at senior and youth level. The Bakken Bears currently hold the attendance record for a single basketball game in Denmark.

Rugby League Football is played at a local, national and international level. Currently the country is ranked 26th on the RLIF. Danish domestic teams, including Jutland RLFC (Jylland) and Copenhagen RLFC compete with teams from other areas of Southern Scandinavia.

Denmark is Europe´s strongest badminton country. Ten gold medals have been won since the start of the World Championships in 1977. Poul-Erik Høyer Larsen´s victory at the 1996 Olympic Games is still the only gold medal for Europe. Erland Kops won seven All England Open Badminton Championships in singles and four All England titles in doubles from the late 1950s to the late 1960s, whilst Morten Frost was one of the top players of the 1980s, winning the 1984 World Badminton Grand Prix and four All England singles titles. 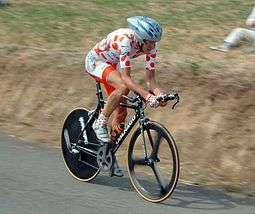 In recent years, Denmark has made a mark as a strong cycling nation, with Bjarne Riis winning Tour de France in 1996, and Michael Rasmussen reaching King of the Mountains status, in the Tour 2005 and 2006. Other well-known Danish riders are Matti Breschel, Nicki Sørensen, Bo Hamburger, Jesper Skibby, Jakob Fuglsang and Lars Michaelsen. Team Saxo Bank is the best cycling team in Denmark, led by Bjarne Riis. In 2008 Carlos Sastre won the Tour de France while riding for Saxo Bank.

In the past years, the Danish cycling has suffered from dope-cases. Bjarne Riis, Bo Hamburger, Rolf Sørensen, Jesper Skibby, Michael Rasmussen all confessed doping use, or were related with doping. But despite all the bad publicity, cycling is still quite a popular sport in Denmark. In 2011, Copenhagen hosted the UCI world championships on the road.

Franz Nachtegall was influential in the introduction of physical education and gymnastics into schools of Denmark.[3][4]

In Denmark, there is also a small but successful group of people doing motorsport. The driver with the most 24 Hours of Le Mans wins so far is Denmark's Tom Kristensen with 9 1st places. Danish driver Kevin Magnussen is also competing in the Formula One right now.

Denmark have marked their status as one of the leading motorcycle speedway countries. Denmark won the Speedway World Cup in 2006, and came 2nd in 2007 missing only 2 points to Poland.

Erik Gundersen and Hans Nielsen occupied the first two places at Gothenburg in 1984. And, in fact, there were two Danes on top of the table in each and every World final from 1984 to 1988 - a somewhat extraordinary record. Gundersen and Nielsen took three titles each as the Danes won six successive and seven out of eight titles from 1984 to 1991.

Denmark has various Mixed Martial Arts fighters with the most prominent being Martin Kampmann. Kampmann fights for the Ultimate Fighting Championship as a 170-pound welterweight and is considered as one of the best fighter in the division.

The Denmark national cricket team has been performing well and has reached World Cricket League's Division two which kept their hopes to qualify for the 2011 Cricket World Cup. Cricket has been played in Denmark since the mid 19th century, brought there by British. Along with the men's team Denmark national women's cricket team also has some introduction into cricket. 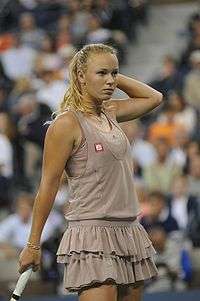 Caroline Wozniacki is commonly referred to as the best Danish female tennis player in history. She is a former World No. 1 on the WTA Tour. As of 23 January 2012, she held this position for 67 weeks. She was the first Scandinavian woman to hold the top ranking position and 20th overall. She has won 20 WTA singles titles as of October 2012, and is currently ranked number 10 in the WTA rankings.

Frederik Løchte Nielsen became the first Dane ever to win a Wimbledon championship title in 2012. Nielsen and his partner Marray, who had only played three tournaments together previously, also became the first wild card ever to win the Wimbledon men's doubles. His current position in the ATP doubles rankings is No. 21.

There are seven Danish ice hockey players currently in the National Hockey League, Jannik Hansen of the Vancouver Canucks, Nicklas Jensen of the New York Rangers, Frans Nielsen of the New York Islanders, Lars Eller of the Washington Capitals, Mikkel Boedker of the Phoenix Coyotes, Frederik Andersen of the Toronto Maple Leafs, and Nikolaj Ehlers of the Winnipeg Jets. Other Danes who have played in the NHL include Philip Larsen and Oliver Lauridsen. There also some Danes in many other leagues.

The Denmark men's national ice hockey team have been in the best division since 2003. The Danish national hockey team scored two historic, unexpected upsets in Tampere, Finland, defeating the United States 5-2 on April 26, 2003 and tied Canada 2-2 six days later on May 2, 2003. At the 2010 World Championship Denmark finished 8th place, which is their best ever placing to date. They are currently number 12 on the IIHF World Ranking. Denmark have nine players in world's best hockey league, the NHL. The first Dane to play a NHL-game was Frans Nielsen on January 6, 2006.