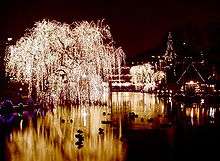 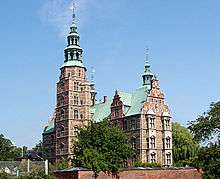 Tourism in Denmark constitutes a growth industry. Tourism is a major economic contributor at approx. DKK 82 billion in revenue and 120,000 full-time-equivalent-jobs annually, for the tourism experience industry alone in 2014.[1]

Inbound tourists to Denmark mainly comprise people from neighboring countries, especially Germany, followed by Sweden, Norway, and the Netherlands. The UNWTO's World Tourism rankings show that Denmark had 8.7 million visitor arrivals in 2010. The total annual number of overnight stays in Denmark has been somewhat declining in 2011.[2][3][4]

Denmark has long stretches of sandy beaches, attracting many tourists in the summer, with Germany accounting for most foreign visitors. Swedish and Norwegian tourists often come to visit the relatively lively city of Copenhagen, while many young Scandinavians come for Denmark's comparably cheap and readily accessible beer, wines and spirits.

As Europe's oldest kingdom and the home of Hans Christian Andersen, Denmark is often marketed as a "fairytale country". The term is so ingrained, that it is still used in international news reports, especially when the news is of a nature contradicting the image, such as the Copenhagen riots or the Jyllands-Posten Muhammad cartoons controversy.

Denmark has a relatively large outbound tourism, with Spain as primary destination, accounting for 14% of all overnight stays abroad of four days or more in 2013. Turkey ranks as the primary destination outside of Europe at 7%.[2][5]

In 2004 Copenhagen Region had 136 hotels with a total of 4.9 million nights spent. There were 250 cruise liners calling at Copenhagen Port with more than 350,000 passengers. 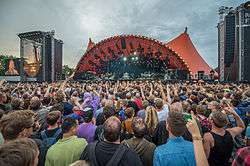 Kronborg Castle in Helsingør is famous for its associations with Shakespeare's Hamlet. The Louisiana Museum of Modern Art 30 km north of Copenhagen is the most visited museum in Denmark, and Roskilde Festival near Roskilde 30 km west of Copenhagen attracts over 100,000 guests every year.

In view of its proximity to Germany, one of the most popular areas of Denmark for visitors is the South of Sealand and the neighbouring islands. Møn, with its magnificent chalk cliffs, Liselund Park and its sandy beaches is one of the main destinations. Falster has a number of sandy beaches including those at Marielyst. The area also has several tourist attractions including Knuthenborg Safari Park and Middelaldercentret both on Lolland, BonBon-Land near Næstved and the GeoCenter at Møns Klint.

The island of Bornholm in the Baltic Sea to the south of Sweden offers tourists a variety of attractions including rocky seascapes, picturesque fishing villages and sandy beaches. Among the quaint towns worth visiting are Gudhjem, Sandvig, Svaneke and Rønne. The magnificent ruin of Europe's largest castle, Hammershus, is the island's most famous monument. There are ferry services to Bornholm from Køge near Copenhagen, from Ystad in the south of Sweden, from Rügen in the north east of Germany and from Kołobrzeg and Świnoujście in the north west of Poland. There is also an airport at Rønne.

Ærøskøbing on the island of Ærø

Funen, linked to Sealand by the Great Belt Bridge, has strong associations with Hans Christian Andersen who was born in Odense. The small coastal towns of Fåborg and Svendborg are popular with tourists both as attractions in their own right and as centres for visiting the surroundings, particularly the castles of Egeskov and Hvedholm and the unspoiled islands of Thurø, Tåsinge and Ærø with their narrow streets and thatched cottages.

The cities of Aalborg, in the north, and Aarhus, in the east, attract a considerable number of visitors, whether for business or pleasure.

Aarhus is amongst the top 100 conference cities of the World and has seen a large expansion of the hotel business, throughout the last couple of decades. The city is home to several of Denmarks' top tourist attractions, including the museum village of Den Gamle By (the Old Town), ARoS Art Museum, Moesgård Museum and Tivoli Friheden accounting for more than 1.4 million visitors annually. Other important tourist attractions are music festivals and shopping facilities. With one of the largest ports in Northern Europe, more than a dozen international cruise ships docks in Aarhus each year. 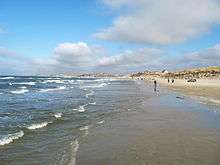 The beach at Løkken

Among Jutland's regional attractions are Legoland close to Billund Airport, the easterly village of Ebeltoft with its cobbled streets and half-timbered houses, Skagen in the far north famous for its seascapes and artist community and the north-west beach resorts of Løkken and Lønstrup. Finally the island of Mors, famous for its natural beauty, attracts tourists to its Jesperhus Flower Park and to the cliff at Hanklit which overlooks the sea.

Jelling, near Vejle in the south-eastern part of Jutland, is a World Heritage Site, famous for its two great tumulus mounds erected in the late 10th century and its runic stones erected by King Harold.

Near Esbjerg on the west coast stands Svend Wiig Hansen's enormous sculpture of four chalky white figures gazing out at the sea. Known as Mennesket ved havet or Men at the Sea and standing 79 m high, it can be seen for miles around.

The new Danish cuisine - part of the new Nordic cuisine movement - has gathered international attention in the past decade as an inspiring, high quality gourmet cuisine with several acclaimed restaurants. The most popular restaurants of this particular cuisine is primarily located in the Copenhagen area including Noma, Geranium, Restaurant AOC, Den Røde Cottage and many others. Important provincial restaurants serving a new Danish cuisine, includes Ti Trin Ned in Fredericia and Ruths Gourmet in Skagen.

Apart from the new Danish cuisine, Denmark has an increasing number of high quality gourmet restaurants serving an international cuisine that has also attracted international attention. Many restaurants in the Copenhagen area has been awarded Michelin stars and in 2015 a couple of restaurants in Aarhus, was the first provincial restaurants to receive this highly acclaimed rating.[7][8] Many other restaurants throughout the country figures in other important restaurant guides, including the Nordic White Guide.[9]

The usual fare of typical Danish food for the citizens, comprise a lunch of smørrebrød on thinly sliced rye bread. Traditionally, the meal begins with fish such as marinated herring, smoked eel, crab, or breaded plaice filets with remoulade and moves on with meat such as slices of roast pork or beef, frikadeller (meat balls), hams and liver pâté. The sandwiches are richly garnished with onion rings, radish slices, cucumbers, tomato slices, parsely, remoulade and mayonnaise.[10] The meal is often accompanied by beer, sometimes also by shots of ice-cold snaps or akvavit. In the evening, hot meals are usually served. Traditional dishes include fried fish, roast pork with red cabbage (the national dish), pot-roasted chicken, or pork chops. Game is sometimes served in the autumn. Steaks are now becoming increasingly popular.

Copenhagen Airport is the largest airport in Scandinavia. The airport is located at Kastrup, 8 km from central Copenhagen. It is connected by train to Copenhagen Central Station and beyond as well as to Malmö and other towns in Sweden.

For the west of the country, the major airport is Billund although both Aarhus, Aalborg, and Karup have smaller airports with regular connections to Copenhagen. 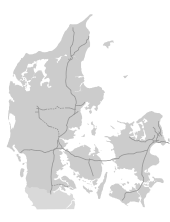 Denmark has a good national railway network. There are also frequent train services to Malmö and other parts of Sweden. Germany is connected both by rail services using the ferries from Puttgarden to Rødby and by services across the Flensburg-Padborg land border in the south of Jutland.

Motorways are well developed across the country, the only tolls being on the major bridges (over the Great Belt and to Malmö).

Outside of the towns and cities there are often bicycle tracks parallel to, but separated from, the roads between towns. During the summer months, there are free "city bikes" stationed at various spots in the downtown area of Copenhagen and Aarhus. The idea is that anyone can take a bike from one of the spots, ride it to another spot and leave it there for the next person.

There are numerous national and regional bicycle routes throughout Denmark. They are all marked and include rest areas with benches and other necessities.

There are also a number of ferry services connecting the Danish islands.[13]