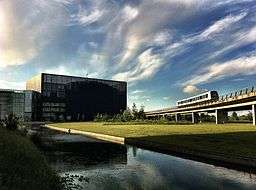 DR is funded by the levying of a broadcast receiving licence fee, payable in Denmark by all owners of radios, television sets, and, in recent years, computers and other devices capable of receiving DR's video content, whether or not they use DR's services.

DR operates four nationwide FM radio stations,[2] (note that P1 and P2 now share one FM network)[3] as well as a total of eight DAB channels[4] (including the 4 on FM). All stations can be listened to on the web and via mobile radio.

DR was founded on 1 April 1925 under the name of Radioordningen, changed to Statsradiofonien in 1926, and Danmarks Radio in 1959.[5] The abbreviated form DR has been used in official documents since 2000.[6]

During the German occupation of Denmark in World War II, radio broadcasts were censored – under particularly harsh conditions from August 1943 – leading many Danes to turn to Danish-language broadcasts from the BBC or the illegal press,[7] as well as Swedish radio in 1944–1945.[5]

Statsradiofonien's second radio station, Program 2 (P2), was added in 1951, followed by P3 in 1963. Experimental television broadcasts started in 1949, with regular programming from 1951 and daily programmes from 1954.[5] Color television test broadcasts were started in March 1967, with the first large-scale color broadcasting occurring for the 1968 Winter Olympics in Grenoble, France.[8] Danmarks Radio officially ended "test" transmissions of color television on 1 April 1970, although it wasn't until 1978 that their last black-and-white television program (TV Avisen) switched to color.[8]

At the Danish changeover to over-the-air digital signals on 1 November 2009, DR added three new channels to their lineup[10]

In 2013, DR introduced a new logo in which the words "DR" is featured in a white sans-serif font on a black background. This is however used only on some of DR's radio and television stations such as the radio station DR P3 as well as the newly introduced TV channels DR3 (launched January 28, 2013 and replaced DR HD) and DR Ultra (launched March 4, 2013 and replaced DR Update).

Since 1963, DR had awarded the Rosenkjær Prize (Danish Radio "lectures prize") to a prominent scientist or cultural figure who has shown the ability to make a difficult subject available to the public in lecture form. The prizewinner commits to hold a number of radio lectures. The prize is named after Jens Rosenkjær (1883–1976), Head of State Broadcasting 1937–53. The price is (2008) of DKK 25,000, as of 2009 raised to DKK 40,000 [11] 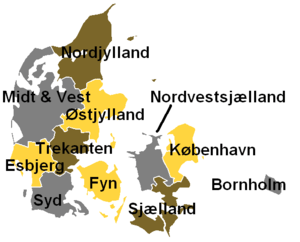 Danmarks Radio on Bornholm, in Rønne.

DR operates four national radio channels, broadcast on FM, as well as DAB and web radio. In 2011 DR began to relaunch all their radio stations. As of March 2015 DR has 8 channels, 4 on both FM and DAB and 8 on DAB. All radio stations can be listened to on DR web radio:

The first trials of DAB were carried out in 1995,[12] with eight channels officially launching in October 2002.[13] The DAB lineup has changed over the years, and as of August 2011, DR broadcasts 7 different DAB channels, including the four channels also broadcast on FM.[14]

DR was Denmark's first television channel. It began broadcasting on 2 October 1951. Since the introduction of DR2 on 30 August 1996 it has been known as DR1[15] DR2 is the third national subscription-free TV channel in Denmark (it followed the establishment of TV 2 and its sister channel). It was known in its earliest years as den hemmelige kanal ("the secret channel") because it could not be seen nationwide at its launch — a situation much ridiculed by its competitors. Its early programme content was also fairly narrow. DR2's traditional specialisms are cultural programmes, satirical comedy, in-depth news programmes, documentaries, and a weekly temalørdag (Theme Saturday) strand examining diverse aspects of one chosen subject in a series of linked programmes.

In late 2011 DR3 was introduced instead of DR HD. Initially DR 3 particularly targeted the age group from 15 to 35. Early in 2012 the news channel DR Update was closed. Instead DR 2 initially became main channel for news and society. But due to falling viewing figures, this concept was soon changed. DR 2 now airs also British detective series (Which also is the case in the main channel DR1), and at Sunday afternoons (except during summer time) "classic" films are aired (Søndagsklassikeren). The films are usually from the mid-1960s to the mid-1980s; they may be British, American but occasionally also in languages other than English. The main point about these films are that they drew attention at their time. At other times and days, several British comedy shows has been aired. For instance Yes, Minister, Yes, Prime Minister and Dad's Army. DR2 also airs a modern quality movie at 8 pm every Friday. While DR3 usually airs modern American films and Jimmy Fallon's show. Friday to Sunday DR3 airs several films, usually starting the first one in the afternoon. DR3 never airs news and when showing documentaries they are of Top Shot, Mayday Airdisater and Ice Road Trucker character, and never of social . character. DR1 is still the main channel, where most of all DR's own productions are aired. Some of them has reached international fame, like Forbrydelsen (remade in America as The Killing). Like DR3 several films are aired Friday's to Sundays. But 8 pm is usually the time for Danish shows of various kind (often based on "common people" is given a chance to win a notable (but nor more) amount of money. Typically a maximum gain of 250.000 Danish krone. Or around 25.000 GB Pound sterling. Very few has ever won that much however. The fourth DR channel for adults is DR K. It's a bit unclear what the "K" actually stands for. It could be "Classical" , "Cultural" or even "Knowledge". The channel airs film from all around the world and mixes the films with different kind of documentaries, many of them historical. From "World Trade Center 9-11" and back to the Ancient World or the Medieval time. Also cultural documentaries are commonly aired, as well as Opera, Theatre and Musicals. Finally has DR since 2012 aired two channels for children, DR-Ramasjang for kids up to 5–7 years and DR Ultra for little older children.

Sport live is not purchased, but free events like the FIFA World Cup and UEFA Euro are aired together with their main rivals, the equally national owned, semi public service network TV2 network (which airs five national channels and one regional channel. No advertises are aired within films and other programmes, with exception of "natural breakes", like half-time of a football match).

All of Denmark is covered for terrestrial receiving through the DVB-T & MPEG4 digital protocol and comprimation. All six channels are uncoded. Given the Danish islands and the country's low topography so called spill is inevitable if every corner of the country must be coveraged. Hence all DR's channels are available also in northernmost of Germany, at the Jutland peninsula. (In the German part of the historical Slesvig province live still today around 10.000 people with Danish as their native language) With a common antenna DR channels can be received down to the German City of Kiel. Also around a million Swedes can receive all DR's channels. As the well populated western part of Scania is located well inside DR's coverage area not so few southern Swedes whose dialect is closer to the Danish language compared to more northern Swedish provinces) likes to watch for instance the Weather Forecast at DR1 (As Copenhagen and Bornholm are located to the west and south-east of the Swedish province.) DR appears to be aware of this, since they always puts a temperature figure in Scania on the forecasting maps, and at occasions also mention Scania or areas of Scania. Also featured film, "Britcrime" (a Scandinavian word for all BBC, ITV and Channel Four criminal dramas, like Midsomer Murders, Inspector Morse and others). Also Swedes who are having difficulties in understanding Danish, can much more easily learn to read Danish subtitles. The two most popular Danish channels DR1 and TV2 are usually included in most southern and Western coast Swedish analogue Cable TV nets. But in order to receive all DR's channels, a common UHF-antenna is required. (This does however rule out the coded TV2, but it's no big deal to combine an antenna (through an digital decoder, with or without Viaaccess card slot) with an analogue cable network.[17]

The Danish People's Party, a nationalistic political party, has criticized DR for being biased against the party in its political news coverage, attributing this partly to the party-political nature of appointments to the DR Board of Directors. In response, DR set up a "watchdog committee" intended to detect and report upon any anti-party bias. This criticism is only part of a decade-long constant opposition to alleged left-wing bias at DR. Very important was Aktive Lyttere og Seere, a watchdog group started in 1976 by the politician Erhard Jacobsen, who enjoyed a high level of public support. Erhard Jacobsen was at that time a member of Centrum-Demokraterne, a party he founded himself three years earlier.

In 2008 Mikael Rothstein, author and professor of religious history at the University of Copenhagen, was highly critical of DR when it issued a policy favoring Christian values, since he felt that Muslims would feel excluded.[19][20]

The board of directors of DR comprises eleven members appointed for a four-year period. Three members, including the chairman, are appointed by the Minister of Culture, six by Parliament, while the employees of DR elect two members. The Board has overall responsibility for DR programs and for the hiring of DRs chief executive, director general and the remaining management positions.

Relocation of DR and funding crisis 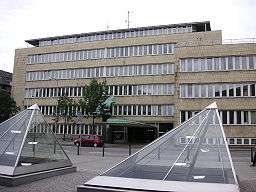 DR has moved all its activities from the Copenhagen region, including radio, TV and the various orchestras to a brand new complex in the northern part of Ørestad, also in Copenhagen.[21][22] The new building, called DR Byen (the DR city), covers an area of approximately 133,000 m2 (1,431,600 sq ft).[23] The complex, which was formally opened with a gala concert on 17 January 2009, contains a new concert building with room for more than 2,200 people, including 1,800 in the largest concert hall.[24] The concert hall also includes a large new organ by J. L. van den Heuvel Orgelbouw, which has already been completed in their workshops in Dordrecht, Netherlands.[25]

The project has become much more expensive than planned, forcing DR to make drastic budget cuts.[26] In April 2007 it was announced that 300 employees would be laid off, meaning that most of the sports department would be closed down as well as most of the educational department, several programmes and the radio channel DR X.[27][28] DR would also give up its rights to the Olympic Games and attempt to sell the rights to a number of other sports events including football.[29]

As the major recipient of license funds, DR operates under a public service contract with the government which it was unable to fulfil in the wake of the budget crisis related to the move.[30][31][32] The budget overspends caused a major scandal which saw senior management of DR replaced, and was followed by a heated political debate over whether the service should receive additional emergency funding. Various measures to mitigate the impact on the public service obligations of the institution were contemplated by Parliament, and a compromise was agreed to limit the impact of the deficit.

DR is funded primarily by means of its broadcast receiver licence, collected biannually by DR Licens.[33] Two different licences are available, the radio licence (radio only) and the media licence (all media, including radio), both collected on a per-household basis, regardless of actual use of the services. Traditionally, radio and television owners were obliged to pay the licence, though the increased availability of online streaming has led to the television licence being replaced by the media licence on 1 January 2007. The media licence is mandatory for all owners of television sets, computers with broadband Internet access or TV tuners, as well as mobile phones etc. capable of receiving video signals; the broadband criterion is set as at least 256 kbit/s.[34]