East Bengal Football Club (ইস্ট বেঙ্গল ফুটবল ক্লাব) is a professional football club, based in Kolkata, West Bengal, India. It is one of the best football clubs as well as the most consistent football club of India. It currently competes in the I-League, the top-tier of Indian football pyramid. The club has won 3 National Football League (India) (later named as I league) titles, 8 Federation Cups, 3 Indian Super Cups and many more. The club is the current holder of the Calcutta Football League. The club has represented India the most number of times in the Asian competitions, with its best performance being a semi-final berth in the AFC Cup 2013. East Bengal had also won ASEAN Club Championship in 2003.

East Bengal FC was founded in 1920. With the start of the National Football League in 1996, East Bengal was one of the original teams to have participated in the league and is the only team to have remained in the top-flight of the country since then.

The club has a long-standing rivalry with the other major Calcuttan club Mohun Bagan, with whom it contests the Kolkata derby. Also there exist other smaller derbies between East Bengal and the likes of Mohammedan SC and Aryan F.C.. The first ever match against Mohun Bagan happened in the semifinal of Cooch Behar Cup on 8th Aug 1921, which ended in a goalless draw. East Bengal lost the replayed match 0-3 played on 10th Aug 1921.

On 28 July 1920 Mohun Bagan were scheduled to play Jorabagan in the Coochbehar Cup.[1] Jorabagan sent out their starting eleven but with the notable exclusion of defender Sailesh Bose who was dropped from the squad for reasons not disclosed.[1] The vice-president of Jorabagan, Suresh Chandra Chaudhuri, asked for Bose to be included in the line-up but the club coaches did not listen.[1] Chaudhuri left the club due to this and along with Raja Manmatha Nath Chaudhuri, Ramesh Chandra Sen, and Aurobinda Ghosh, formed East Bengal on 1 August 1920; 97 years ago.[1]

In 1924 the club won the Second Division to gain promotion to the IFA First Division after finishing in second place to Cameroons "B".[1] Due to Cameroons "A" being in the First Division already the "B" team could not gain promotion and thus East Bengal were next in line for promotion.[1] However more controversy arrose after it was found out that the IFA only allowed two Indian based clubs in the IFA First Division (back then the IFA was British organization) and during the governing body meeting the nine British clubs approved of allowing East Bengal. After this the IFA removed the Indian club limit rule.[1]

Then in 1984 Mr. Dipak Das came into the club and revamped it. He brought in professionalism and turned the club into a professionally ran company.[3] The club won Federation Cup in 1980 and again in 1985. They also became the first Indian club to play in the newly redone Asian Club Championship in 1985.[3] The club then won their first treble in 1990 by winning the IFA Shield, Rovers Cup, and Durand Cup in one season.[3] The club also won the "Stafford Cup" (1986), "McDowell's Cup" (1995, 1997). In 1993, East Bengal FC won its first ever international title i.e. Wai Wai Cup in Nepal.[3] The club also won Federation Cup (India), IFA Shield, Calcutta Football League, Durand Cup and Rovers Cup, several times during this period. In 1996 the club became the founding members of the first nationwide football league in India, the National Football League.[4]

The club went in the semi-finals of the reputed AFC Cup in 2013 where they lost against Kuwait SC of Kuwait.

On 2015,East Bengal completes its second hexa CFL win. They have won it from 2010 till 2015. On the same year the club became runners up of Sheikh Kamal Cup in Bangladesh where they got defeated against Chittagong Abahani in the finals. East Bengal created a new world record by winning the Calcutta Football League seven times in a row (2010-16) which is highest by any club in the world to win any league so many times consecutively.

In 1930, India was swept over by Gandhi’s Satyagraha which had an effect on football. Indian clubs boycotted the ongoing Calcutta Football League midway through the season due to this. Amidst much confusion, Royal Regiment was declared winners in the first division. However, East Bengal was not allowed to be promoted to the First Division. Thousands of East Bengal fans and officials decided to hold a protest march at the East Bengal Ground. It was at this march that flaming torches were carried by the protestors. This gave the club officials the idea of a torch (known as 'Mashal' or 'মশাল' in Bengali) being the club emblem, which has stuck to this day.[6]

The colours of East Bengal FC are red and gold. So the home jersey consists of a red and gold jersey with black shorts while the colour of away jersey actually varies on every year.

The reason for these colours is because after the club was formed the founders debated over the choice of colours for the club jersey. They choose a red and golden colour shirt hanging impressively at the "Whiteaway, Laidlaw & Co." departmental store at Chowringhee, Kolkata. These colours became permanently associated with the club.[7]

Historically, the club has used several stadiums at Kolkata, Howrah and Barasat, including the Eden Gardens, which has been reserved for cricket since Salt Lake Stadium opened in 1984.

The Salt Lake Stadium is a multi-purpose stadium in Kolkata, West Bengal. The stadium is the second largest non-auto racing stadium in the world and the largest in India. It is currently used for mainly football matches. The stadium was built in 1984, has got a capacity of 85,000 people. The stadium has three tiers.[8] The stadium includes a unique running track, long jump track, electronic scoreboard, natural turf, floodlighting arrangement, air conditioned VIP rest room and Conference Hall along with Medical Room & Doping Control Room.[8] Other features of the stadium are boxes for TV along with several platforms for TV cameras, press boxes, air conditioned player's changing rooms. 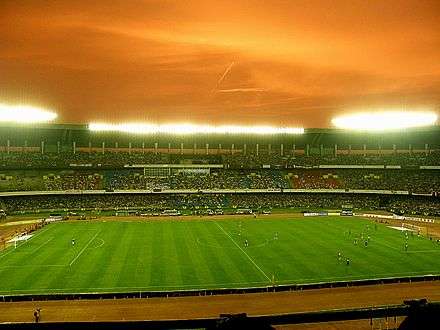 The Salt Lake Stadium hosts the home games of East Bengal in I-League and AFC Cup.

The East Bengal Ground is another stadium in Kolkata, India. This stadium has natural grass turf. This stadium is associated with the club and is actually East Bengal F.C.'s home ground. The stadium lies on the Maidan (Kolkata) area on the northern side of Fort William and near to the Eden Gardens. Other features of the stadium are like elevator, commentary box, press box, etc. The club has got air conditioned dressing rooms for players, modern gymnasium, coffee shop and other advanced facilities. This stadium is currently used mostly for football matches of Calcutta Football League and is the home stadium of East Bengal in most of the Calcutta Football League matches. The stadium holds 23,500 people.[8]

Barasat Stadium is also a stadium used by East Bengal club to play some of its regional matches, specially in case if the Salt Lake Stadium or East Bengal Ground cannot be used for any reason.

This stadium has natural grass turf and comes with proper floodlights to support night matches unlike the East Bengal Ground.

Kanchenjunga Stadium, a multipurpose stadium based in Siliguri has been used several times to host football matches for East Bengal Club. The club has a huge fan base there. 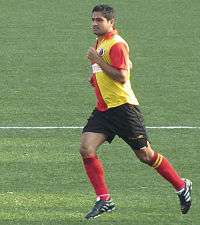 The club has won a total of 137 trophies so far that includes both national and international trophies. Few of them are listed below.[11]