Mario Cipollini (Italian pronunciation: [ˈmarjo tʃipolˈlini]; born 22 March 1967), often abbreviated to "Cipo", is a retired Italian professional road cyclist most noted for his sprinting ability, the longevity of his dominance (his first pro win came in 1989, his last in 2005; 191 victories in all) and his colourful personality. His nicknames include Il Re Leone (The Lion King) and Super Mario. He is regarded as one of the best sprinters of his generation. 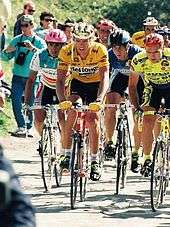 Cipollini was born in Lucca, Tuscany. He came from a cycling family - his father, Vivaldo, had been a successful amateur racer in his youth, whilst his brother Cesare had raced as a professional and his sister Tiziana had also competed as a cyclist. Mario was a prolific winner in his youth career, scoring a total of 125 victories in age group and amateur races before joining the professional peloton in 1989.[1] His career highlights include the Road World Championships and Milan–San Remo in 2002, and 42 stages in the Giro d'Italia. Cipollini's 42nd Giro stage win in 2003 - his last stage win in that race — broke the record by Alfredo Binda that had stood since 1933. He also won 12 stages in the Tour de France and three stages in the Vuelta a España. In the 1999 Tour de France he led the peloton on the fastest stage in the history of the Tour, averaging more than 50 km/h over 194.5 km.[2] In the same Tour, he won 4 stages in a row, setting the post-WWII record for consecutive stage wins. He has also found success in Belgium, winning Gent–Wevelgem in 1992, 1993 and 2002 (record).

At the peak of his career, Cipollini's speed was unrivaled, and he is credited with being the first rider with a sprint train. The red jerseys of his Saeco team, featuring team-mates such as Paolo Fornaciari, Giuseppe Calcaterra, Gian Matteo Fagnini and Mario Scirea[1] were commonly seen at the front of the peloton toward the end of the flat Grand Tour stages in the late 1990s. The train kept the pace high in the closing kilometers, to dissuade opposing riders from attacking and to ensure that in the final 200–300 meters, Cipollini was the only cyclist able to maintain the speed. This changed the way teams approached mass sprints and bred a new generation of sprinters such as fellow Italian Alessandro Petacchi.

The beginning of 2002 saw Cipollini win Milan–San Remo with his new Acqua-Sapone team, and later Gent–Wevelgem. However, a falling out with the organizers of the Tour de France made him announce his retirement. Italian national coach Franco Ballerini convinced him to return to competition, and built the Italian national team around Cipollini for the 2002 UCI world championship. Cipollini won the rainbow jersey in a sprint finish in Zolder, Belgium.

In the 2003 Giro d'Italia Cipollini focused on Alfredo Binda's record 41 Giro stage wins while in the world champion's jersey. His attempt was almost derailed by Alessandro Petacchi of the Fassa Bortolo team. After many failed attempts, he finally broke the record, although he had to abandon the next stage due to injuries in a crash on a rain-soaked finish. He said that the crash ended his career. His team, Domina Vacanze-Elitron, was left out of the Tour de France that year, prompting a comment from Cipollini that the organisers disrespected the rainbow jersey. When he retired from the 2004 Giro due to another crash, it was the only time he entered the Giro without winning a single stage.

In 2008, he returned to competitive cycling with the Rock Racing team at the Tour of California.

Cipollini made no secret that he did not like climbing stages, and while he completed all stages of the Giro on many occasions, he infuriated purists by not attempting mountain stages at the Tour or Vuelta. While this is a common practice with sprinters without points jersey aspirations so as to save themselves for the rest of the season, Cipollini's practice of releasing photos of himself lounging at the beach while the others struggled in the mountains earned him more than his fair share of attention in this regard.

Cipollini also became famous for extravagant clothing, especially racing uniforms, sporting custom-made skin suits. Some of his memorable kits include a muscle suit,[3] zebra,[4] and tiger[5] prints, and a techno-skinsuit[6] inspired by the 1982 film Tron. Off the course, Cipollini and his Saeco squad dressed as ancient Romans during a rest day at the 1999 Tour de France, to celebrate Julius Caesar's birthday and to commemorate Cipollini's record fourth consecutive Tour de France stage win. He was fined for wearing an all-yellow outfit while leading the Tour de France; this practice to wear more yellow and even have a yellow bike has since become generally accepted.[7]

These antics violated UCI regulations, which resulted in Cipollini and his team being fined thousands of Swiss francs. The muscle suit fetched 100 million lira (US$43,710) in a charity auction, nearly 100 times the fine. Some organisers, especially Jean-Marie Leblanc of the Tour de France, took offence at his hijinks and he wasn't invited to race in the Tour from 2000–2003, despite being the world champion in 2003. Later in 2003, he drew the ire of the organisers of the Vuelta a España when he quit after the prologue time trial. His team had been invited to compete with the condition that Cipollini participated. He said he was recovering from injury and should not have been forced to race in the first place. Three years earlier, Cipollini got kicked out of the 2000 Vuelta a España after he punched Vitalicio Seguros rider Francisco Cerezo to the ground before the start of a stage.

Cipollini's powerful performances sometimes risked being eclipsed by his flamboyant manner and lifestyle. His height, looks and mane of hair earned him the nickname "Lion King", and he adopted other names, including "Super Mario" and "Mario the Magnificent." His wardrobe consisted of hundreds of suits, ties and shoes, many of which he never wore. In 2002 he was arrested for motorpacing on an Italian autostrada. He commented that it was the only place where he could safely get up to top speed for training. He responded to criticisms by claiming that he helped generate coverage for his sponsors, and that it was all part of his showmanship.

Daniel Coyle's book Lance Armstrong's War says Cipollini's profile was little more than a decoy. The intent was that competitors would find themselves distracted by the constant media coverage of Cipollini, and demoralised by the impression that he could party all night and beat them the next morning.

Despite this boisterous public image, Cipollini could often be quite humble regarding his fellow cyclists. After breaking Alfredo Binda's record for Giro stage wins he remarked he would have been happy "just to polish [Binda's] shoes." Reacting to the 2004 death of Marco Pantani, Cipollini said, "I am devastated. It's a tragedy of enormous proportions for everyone involved in cycling. I'm lost for words." 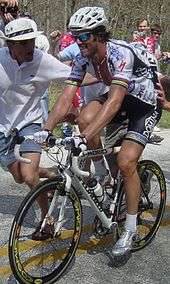 After having vowed to retire several times in his career, usually in a public fit of pique, Cipollini finally made good on his promise on April 26, 2005, one week before the start of the 2005 Giro. His swan song was to participate in a ceremonial prologue of the Giro wearing a fluorescent pink skin suit, which listed his 42-stage wins.

Cipo emerged from retirement in early 2008, with Rock Racing. His first race back was the Tour of California, and he finished 3rd on stage 2. On the eve of the Milan–San Remo, he announced that he would retire again; citing disagreements over his leadership role on Rock Racing.

In 2010 Cipollini started his own brand of bicycles which were used by the Italian ISD–NERI team.[9]

In February 2013, news surfaced that Cipollini could have been a client of doctor Eufemiano Fuentes from 2001 to 2004.[10] A report published by Italian newspaper Gazzetta dello Sport alleged that Cipollini's codename was "Maria" and that he received various doping products, including injecting 25 blood bags from the beginning of 2003 to the start of the Giro d'Italia in May.[11] Cipollini's lawyer stated that the claims were false when the story was revealed on 9 February 2013.[12]

His name was on the list of doping tests published by the French Senate on 24 July 2013 that were collected during the 1998 Tour de France and found positive for EPO when retested in 2004.[13]