The music of Belgium is a cultural crossroads where Flemish Dutch-speaking and Walloon French-speaking traditions mix with those of German minorities and of immigrant communities from Democratic Republic of the Congo and other distant countries. 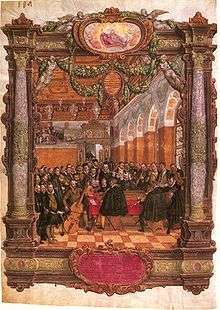 Many of the major 15th- and 16th-century composers of the Franco-Flemish School—a current of vocal polyphony that played a central role in European art music of the time—were born and bred in the portion of the Low Countries that is situated in present-day Belgium, often in Hainaut.[1] The late medieval composer and music theorist Johannes Ciconia (c. 1370–1412) had been born in Liège, but like many later Flemish polyphonists he spent much of his life working in Renaissance Italy. While it remains unclear why Flemish and other Netherlandish musicians exerted such a strong influence on Renaissance music throughout Europe (with a particularly strong axis developing between Liège and Rome), one possibility is the emphasis that was placed locally on music theory.[1] Guillaume Dufay (c. 1397–1474), who was born near Brussels (he moved as a child to Cambrai, and also worked in Italy), was a key figure of the early 15th-century Burgundian School, and he was considered by his contemporaries to be the leading composer of the age.[2] Another influential figure was Gilles Binchois (c. 1400–1460): probably born in Mons (or nearby Binche) he moved to Lille, the largest city of what is now French Flanders, and unlike many of his contemporaries, he maintained professional connections with the Burgundian court throughout his life.[3] Johannes Ockeghem (c. 1410–1497) is also considered one of the leading composers of the 15th century; a native of Hainaut, he spent most of his career working for the French court.[4]

The migration and influence of Netherlandish composers reached its height roughly between 1480 and 1520, in a period when talented musicians from Low Countries were recruited in courts and cathedrals across the continent, effectively providing the music school of Europe.[1] The music of Josquin des Prez (c. 1450–1521) was considered an aesthetic model for much of the 16th-century High Renaissance; although referred to in his lifetime as a Frenchman (he worked in both France and Italy) he was probably born in Hainaut.[5] Other influential composers of the period whose origins can be traces to the Belgian area of the Low Countries include Jacob Obrecht (c. 1457–1505), Pierre de La Rue (c. 1452–1518), Alexander Agricola (c. 1445–1506), and Gaspar van Weerbeke (c. 1445–c. 1516).[1] Although the emigration of musicians from the Low Countries continued into the second half of the 16th century, the hegemony of Netherlandish influence was on the wane.[1] One of the last truly influential figures of the era was Orlande de Lassus (c. 1532–1594).[1] Another native of Mons, Lassus became one of the most versatile composers of the century, and (according to his entry in Grove) "the best-known and most widely admired musician in Europe."[6]

André Ernest Modeste Grétry was the most famous composer - born in what is now called Belgium - of the 18th century. The 19th century supplied composers like Henri Vieuxtemps, César Franck, Guillaume Lekeu and Eugène Ysaÿe. At the end of the 20th century the most notable Belgian composers were Piet Swerts and Wim Mertens.

In the field of opera, baritones Jules Bastin and José van Dam have become the most famous and internationally successful Belgian opera singers. In the lighter classical genre, Flemish singer Helmut Lotti reached international success with his interpretations of popular opera songs for large audiences.

In the late 20th and early 21st centuries, Belgian artists like Wieland Kuijken and Marcel Ponseele contributed to the Historically informed performance of baroque music, with their ensembles La Petite Bande and il Gardellino.

Jazz with the Blues

One of the most famous jazz instruments, the saxophone, was invented by a Belgian: Adolphe Sax.

Some known Belgian blues artists are Elmore D (who sings in English and Walloon dialect), and the Flemish Roland van Campenhout (also known as Roland).

In the 1930s, the Belgian gypsy guitarist Django Reinhardt became one of the first important jazz musicians to be born in Europe, and one of the most important jazz guitarists of all time. In 1949 Toots Thielemans joined a jam session in Paris with Sidney Bechet, Charlie Parker, Miles Davis, Max Roach and others. He moved to the US in 1952 where he was a member of Charlie Parker's All-Stars. Toots Thielemans is often credited by jazz aficionados and jazz critics to be the greatest jazz harmonica player of the century. His music has been used in films like Midnight Cowboy and Turkish Delight, and television series such as Sesame Street and Baantjer. Other well known Belgian artists are Aka Moon, Bobby Jaspar, Bert Joris, Philip Catherine, Steve Houben, Octurn and René Thomas.

Folk and other traditional music

Bobbejaan Schoepen has been a pioneer in Belgian vaudeville and pop music since the late 1940s. Not only was he the first Belgian singer to manage an international breakthrough, he was also the first to use modern equipment, a personal tourbus and a system of artist sponsoring. He also introduced the first country & western recordings in the Low Countries and Germany. In the 1950s Bobbejaan Schoepen recorded his own absolutely crazy folk music often singing in Flemish dialect. He was also a virtuoso whistler.

From the late 1960s, Flanders saw a vivid revival of traditional music (and, to a lesser degree, of traditional dances) through the efforts of musicians like Wannes Van de Velde, Willem Vermandere, Walter De Buck, Hubert Boone, Herman De Wit and many more. They inspired a new generation of folk musicians through their written and recorded publications, and through festivals and regular summer academies and master classes.

Walloon folk music has not had as vibrant a revival as Flemish, but artists like Coïncidence, Remy Dubois, Luc Pilartz, Rue du Village and Claude Flagel have kept the folk traditions alive.

Contrary to general evolution, there has always been great openness across the so-called linguistical barriers - there are many collaborations between Belgian musicians of different language.

The greatest Belgian chansonnier was Jacques Brel, whose classic songs have been covered by several international artists such as David Bowie, Frank Sinatra, Scott Walker and Terry Jacks. Others like Salvatore Adamo, Pierre Rapsat, Arno, Maurane, Axelle Red and Lara Fabian have also enjoyed some success in other French-speaking countries.

With the 1960s folk revival came a new interest into dialect singing. Pioneer Wannes Van de Velde soon got a following, mostly in the folk and traditional styles, but eventually extending into the comedy rock of The Clement Peerens Explosition and the hip-hop of Flip Kowlier. Others, while mostly performing in standard Dutch, will include an occasional phrase or even a complete song in dialect (ex. Johan Verminnen, Rue des Bouchers and Raymond van het Groenewoud, Je veux de l'amour).

During 1950 through 1960 and following decades the most popular, enduring, commercial and critical successful Flemish singer was Will Tura, whose most well known hit in Flanders is "Ik ben zo eenzaam zonder jou" (1963) ("I'm so lonely without you").

The most popular and enduring artists in Flanders and the Netherlands who sing in either their Flemish dialect or standard Dutch are Eddy Wally, Raymond van het Groenewoud, Willem Vermandere, De Kreuners, Clouseau, Gorki (band), Noordkaap,and De Mens.

In 1959 the Belgian singer of Italian descent Rocco Granata scored a big European hit with "Marina". The singing nun Soeur Sourire had an international number one hit in 1963 with Dominique. When folk and hippie culture finally hit a chord around the world the groups The Pebbles ("Seven Horses in the Sky", "I Get Around") and The Wallace Collection ("Daydream") had considerable international success. Irish Coffee, a hard rock band from Aalst also achieved considerable local success in the same era. Due to a lack of really professional management these few pop groups failed to build out a durable international career, a trend which continued during the 1970s when the most successful artists sang in their native tongue. The only real new international successful artist was Plastic Bertrand. (See "Punk" below).

Real international success for Belgian acts began in 1980 with the rock group TC Matic. They were quite popular in the rest of Europe with numbers like "Oh la la la" and "Putain Putain". Lead singer Arno later started his own successful solo career. Many groups and artists had considerable success in other countries, but they usually didn't reach out much further than West Europe. Notable exceptions were Maurane, Jo Lemaire, Soulsister ("The Way To Your Heart", 1987) and Vaya Con Dios ("Puerto Rico", 1988).

In the early 1990s many alternative rock bands finally started to achieve larger international acclaim and success. In Antwerp, a lively indie rock scene sprouts where dEUS is probably the most famous, next to other people and groups like Zita Swoon (formerly Moondog Jr), Evil Superstars, Kiss My Jazz, Dead Man Ray, K's Choice ("I'm Not an Addict"), Admiral Freebee, and Die Anarchistische Abendunterhaltung. In the noise genre Antwerp houses the pioneer band Club Moral. Ghent also has a booming indie scene: Absynthe Minded, Das Pop, Millionaire, Zornik, Awaken and the successful Soulwax bring indierock with a slightly rougher edge than their Antwerp fellows, while The Vogues (Brussels) have a British-influenced sound. Other popular artists are Triggerfinger, Gabriel Ríos and Ghinzu.

The most well-known Belgian punk bands are Chainsaw, The Kids ("Fascist Cops", "There will be no Next Time"), Janez Detd, Funeral Dress and Plastic Bertrand who had a worldwide hit with "Ça Plane Pour Moi" (1978).

Hooverphonic is a famous Belgian trip hop band, which scored hits with "Mad About You" and "Vinegar and Salt".

At the end of the 1980s Belgium started to play a very important role in the development of Techno music. The group Technotronic had a massive international hit with Pump Up The Jam. A new genre, new beat was created and scored international hits with acts like The Confettis ("The Sound of C.", 1988). Bands like Front 242, Snowy Red,[7] Public Relation [8] and A Split-Second played a part in making the music genre EBM popular.

In the 1990s, acts like the partially Dutch-Belgian 2 Unlimited ("No Limit") and the Flemish Lords of Acid and Praga Khan, were internationally successful. Other internationally renowned Belgian dance acts are 2 Many Dj's (a spin-off from the group Soulwax), The Glimmers (formerly Mo & Benoelie),[9] Junior Jack & Kid Creme, Sylver, Milk Inc., Kate Ryan, Lasgo, Ian Van Dahl, and Vive La Fête. The 2000s saw a proliferation of experimental electronic Belgian artists. Acts like Köhn, Ovil Bianca & Tuk got international acclaim and pioneered in the area of experimental electronic music in Belgium around the turn of the century. Jan Robbe, Kaebin Yield and Sedarka are key innovators of the "flashcore" sound,[10] and others including Sickboy of the Belgian Breakcore Gives Me Wood [11] collective were crucial in the development of breakcore and Mashup. Nowadays, singer Stromae has been a musical revelation in Europe and beyond, having great success. In 2015 Lost Frequencies had a big hit with his reworked version of Are You with Me, a song originally by Easton Corbin.

Since the early 1980s, African musicians have played an important part on the Belgian scene, especially those from the former Belgian colony of Congo. Congolese-Belgian Princesse Mansia M'Bila, Rwandan-Belgian Cécile Kayirebwa and Dieudonné Kabongo led this wave that soon incorporated Argentine tango music, Moroccan oud and other music from around the world. The 1990s saw the emergence of Zap Mama, a group of Congolese-Belgian women who played a fusion of Pygmy and other African music with European influences.