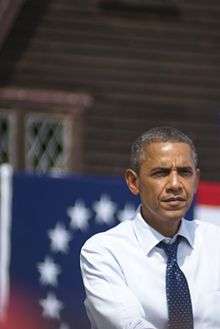 Barack Obama campaigning in Portsmouth, New Hampshire during his 2012 reelection bid. He carried every New England state in 2008 and 2012.

Elections in New England have been defined by the region's political and cultural history, demographics, economy, and its loyalty to particular U.S. political parties. Within the elections in the United States, New England is sometimes viewed in terms of a single voting bloc.

Alumni Hall at Saint Anselm College has served as a backdrop for the media reports during the New Hampshire primary.

Historically, the New Hampshire primary has been the first in a series of nationwide political party primary elections held in the United States every four years. Held in the state of New Hampshire, it usually marks the beginning of the U.S. presidential election process. Even though few delegates are chosen from New Hampshire, the primary has always been pivotal to both New England and American politics. One college in particular, Saint Anselm College, has been home to numerous national presidential debates and visits by candidates to its campus.[3]

Local factories and diners are valuable photo opportunities for candidates, who hope to use this quintessential New England image to their advantage by portraying themselves as sympathetic to blue collar workers. Media coverage of the primary enables candidates low on funds to "rally back"; an example of this was President Bill Clinton who referred to himself as "The Comeback Kid" following the 1992 primary. National media outlets have converged on small New Hampshire towns, such as during the 2007 and 2008 national presidential debates held at Saint Anselm College in the town of Goffstown.[4][5] Goffstown and other towns in New Hampshire have been experiencing this influx of national media since the 1950s.

Judging purely by party registration rather than voting patterns, New England today is one of the most Democratic regions in the U.S.,[6][7][8] with four of the six states considered among the most solidly Democratic in the country. New Hampshire and Maine are generally swing states in federal elections.[9] Republicans in New England are considered by both liberals and conservatives to be more moderate (even socially liberal) compared to Republicans in other parts of the U.S.[10]

† Elected as an independent, but caucuses with the Democratic Party.