The United States presidential election of 1808 was the sixth quadrennial presidential election, held from Friday, November 4, to Wednesday, December 7, 1808. The Democratic-Republican candidate James Madison defeated Federalist candidate Charles Cotesworth Pinckney decisively. Madison was serving as United States Secretary of State under incumbent Thomas Jefferson, and Pinckney had been the unsuccessful Federalist candidate in the election of 1804.

Madison's strongest challenge came from members of his own party. Sitting Vice President George Clinton and former Ambassador James Monroe both challenged Madison for leadership of the party prior to the general election. Clinton received six electoral votes in the general election, all from New York.

This election was the first of only two instances in American history in which a new President would be selected but the incumbent Vice President would continue to serve. (The re-election of John C. Calhoun in 1828 was the other instance.)

Nominations for the 1808 presidential election were made by congressional caucuses. With Thomas Jefferson ready to retire, supporters of Secretary of State James Madison of Virginia worked carefully to ensure that Madison would succeed Jefferson. Madison's primary competition came from former Ambassador James Monroe of Virginia and Vice President George Clinton. Monroe was supported by a group known as the tertium quids, who supported a weak central government and were dissatisfied by the Louisiana Purchase and the Compact of 1802. Clinton's support came from Northern Democratic-Republicans who disapproved of the Embargo Act (which they saw as potentially leading towards war with Great Britain) and who sought to end the Virginia Dynasty. The Congressional caucus chose Madison as its candidate for president and Clinton as its candidate for vice president.[1]

Many supporters of Monroe and Clinton refused to accept the result of the caucus. Monroe was nominated by a group of Virginia Democratic-Republicans, and although he did not actively try to defeat Madison, he also refused to withdraw from the race.[2] Clinton was also supported by a group of New York Democratic-Republicans for president even as he remained the party's official vice presidential candidate.[3]

The election was marked by opposition to Jefferson's Embargo Act of 1807, a halt to trade with Europe that disproportionately hurt New England merchants and was perceived as favoring France over Britain. Nonetheless, Jefferson was still very popular with Americans generally and Pinckney was soundly defeated, though not as badly as in 1804. Pinckney received few electoral votes outside of New England.

Monroe won a portion of the popular vote in Virginia and North Carolina,[2] while the New York legislature split its electoral votes between Madison and Clinton.[3] 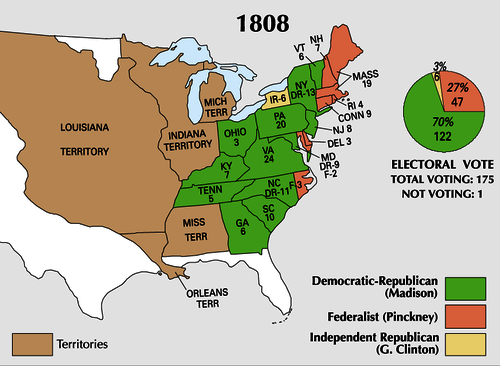