The United States presidential election of 1816 was the eighth quadrennial presidential election. It was held from Friday, November 1 to Wednesday, December 4, 1816. It came at the end of the two-term presidency of Democratic-Republican James Madison. With the Federalist Party on the verge of collapse, Madison's Secretary of State, James Monroe, had an overwhelming advantage against very weak opposition. Monroe won the electoral college by the wide margin of 183 to 34.

The previous four years of American politics were dominated by the effects of the War of 1812. While the war had not ended in victory, the peace concluded in 1815 was satisfactory to the American people, and the Democratic-Republicans received the credit for its conclusion. The Federalists found themselves discredited by their opposition to the war and the secessionist rhetoric from New England embodied by the Hartford Convention of 1814-15. Furthermore, President Madison had succeeded in realizing certain measures favored by the Federalists, for example a national bank and protective tariffs. This gave the Federalists few issues to campaign on, and this resulted in an overwhelming victory for the Democratic-Republicans.

Monroe was the favorite candidate of both former President Jefferson and retiring President Madison. However, Monroe faced stiff competition from Secretary of War William H. Crawford of Georgia. Also, there was widespread sentiment, especially in New York, that it was time to end the Virginia dynasty of presidents. But Monroe's long record of service at home and abroad made him a fitting candidate to succeed Madison. Crawford never formally declared himself a candidate, because he believed that he had little chance against Monroe and feared such a contest might deny him a place in the new cabinet. Still, Crawford's supporters posed a significant challenge.[1]

In March 1816, Democratic-Republican congressmen in caucus nominated Monroe for President and New York Governor Daniel D. Tompkins for Vice President. Monroe defeated Crawford for the nomination by a vote of 65 to 54.

On February 12, 1817, the House and Senate met in joint session to count the electoral votes for President and Vice President. The count proceeded without incident until the roll came to the last state to be counted, Indiana. At that point, Representative John W. Taylor of New York objected to the counting of Indiana's votes. He argued that Congress had acknowledged the statehood of Indiana in a joint resolution on December 11, 1816, whereas the ballots of the Electoral College had been cast on December 4, 1816. He claimed that at the time of the balloting, there had been merely a Territory of Indiana, not a State of Indiana. Other representatives contradicted Taylor, asserting that the joint resolution merely recognized that Indiana had already joined the Union by forming a state constitution and government on June 29, 1816. These representatives pointed out that both the House and Senate had seated members from Indiana who had been elected prior to the joint resolution, which would have been unconstitutional had Indiana not been a state at the time of their election. Representative Samuel D. Ingham then moved that the question be postponed indefinitely. The House agreed almost unanimously, and the Senate was brought back in to count the electoral votes from Indiana. 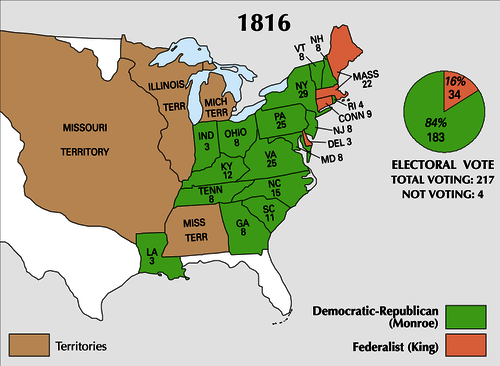 When the votes were counted, Monroe had won all but three of the nineteen states. King thought that a Monroe victory was inevitable, and did not seriously contest the election.[2]

Maryland did not choose its electors as a slate; rather, it divided itself into electoral districts, with each district choosing one elector. Three of Maryland's eleven districts were won by Federalist electors. However, these electors did not vote for King or for a Federalist vice president, instead casting blank votes as a protest, thus resulting in Monroe winning the votes of all the Maryland state electors.