In geometry, a truncation is an operation in any dimension that cuts polytope vertices, creating a new facet in place of each vertex. The term originates from Kepler's names for the Archimedean solids.

In general any polyhedron (or polytope) can also be truncated with a degree of freedom as to how deep the cut is, as shown in Conway polyhedron notation truncation operation.

In general all single ringed uniform polytopes have a uniform truncation. For example, the icosidodecahedron, represented as Schläfli symbols r{5,3} or

has a uniform truncation, the truncated icosidodecahedron, represented as tr{5,3} or

. In the Coxeter-Dynkin diagram, the effect of a truncation is to ring all the nodes adjacent to the ringed node.

A regular polygon can also be represented by its Coxeter-Dynkin diagram,

, and its uniform truncation

, and its complete truncation

represents Coxeter group I2(n), with each node representing a mirror, and the edge representing the angle π/n between the mirrors, and a circle is given around one or both mirrors to show which ones are active.

Star polygons can also be truncated. A truncated pentagram {5/2} will look like a pentagon, but is actually a double-covered (degenerate) decagon ({10/2}) with two sets of overlapping vertices and edges. A truncated great heptagram {7/3} gives a tetradecagram {14/3}.

Uniform truncation in regular polyhedra and tilings and higher 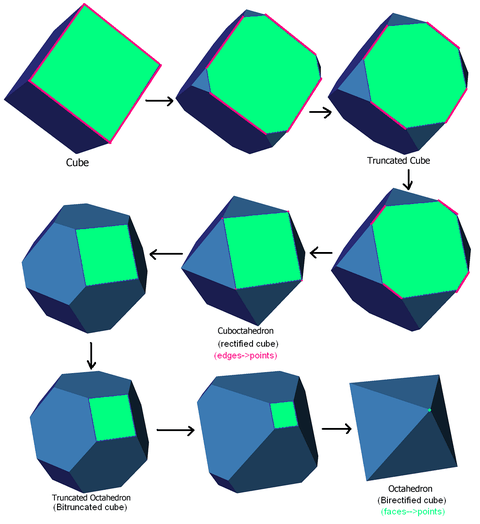 Truncations of the cube beyond rectification

When the term applies to truncating platonic solids or regular tilings, usually "uniform truncation" is implied, which means to truncate until the original faces become regular polygons with double the sides.

This sequence shows an example of the truncation of a cube, using four steps of a continuous truncating process between a full cube and a rectified cube. The final polyhedron is a cuboctahedron.

The middle image is the uniform truncated cube. It is represented by a Schläfli symbol t{p,q,...}.

A bitruncation is a deeper truncation, removing all the original edges, but leaving an interior part of the original faces. The truncated octahedron is a bitruncated cube: 2t{4,3} is an example.

A complete bitruncation is called a birectification that reduces original faces to points. For polyhedra, this becomes the dual polyhedron. An octahedron is a birectification of the cube: {3,4} = 2r{4,3} is an example.

Another type of truncation is called cantellation, cuts edge and vertices, removing original edges and replacing them with rectangles.

Edge-truncation is a beveling or chamfer for polyhedra, similar to cantellation but retains original vertices, where edges are replaced by hexagons. In 4-polytopes edge-truncation replaces edges with elongated bipyramid cells.

Alternation or partial truncation only removes some of the original vertices.

A partial truncation or alternation - Half of the vertices and connecting edges are completely removed. The operation only applies to polytopes with even-sided faces. Faces are reduced to half as many sides, and square faces degenerate into edges. For example, the tetrahedron is an alternated cube, h{4,3}.

Diminishment - A more general term used in Johnson solids for the removal of one or more vertices, edges, or faces of a polytope, without disturbing the other vertices. For example, the tridiminished icosahedron starts with a regular icosahedron with 3 vertices removed.

Other partial truncations are symmetry-based. For example, the tetrahedrally diminished dodecahedron.

Types of truncations shown on an edge isolated from a larger polygon or polyhedron with red and blue vertices. The edge reverses direction after complete truncation.

The linear truncation process can be generalized by allowing parametric truncations that are negative, or that go beyond the midpoint of the edges, causing self-intersecting star polyhedra, and can parametrically relate to some of the regular star polygons and uniform star polyhedra.