Pakhtakor was the only Uzbek club to play in the top-level Soviet football league and was the only Central Asian club to appear in a Soviet Cup final. Playing in the Uzbek League since 1992, the club has been the undisputed powerhouse in Uzbekistan since the fall of the Soviet Union, winning ten Uzbek League titles, including six in a row from 2002–07.[1] Pakhtakor also won seven consecutive domestic cups between 2001–07, winning eleven cups in total.[2] Players for the club have won Uzbek footballer of the Year honours eight times, and Pakhtakor teammates swept the top three spots in 2002. Club managers have been named Uzbek coach of the year twice.[3]

Pakhtakor's first official match was on 8 April 1956, and is considered to be the club's "birthday". Its first match was played against a team from the city of Perm, Russia (then called Molotov city), presumably FC Zvezda Perm. The first goal in Pakhtakor history was scored by Laziz Maksudov on a penalty shot and Maksudov's goal was the only and game-winning strike.[4]

The team was formed in three months, and the government invited the senior trainer Valentin Bekhtenev from Moscow to recruit the best Tashkent players for the new Pakhtakor. At the time, the club was to represent Uzbekistan in Soviet football.[5]

In 1959, the club was promoted to the Soviet Top League for the first time. During the 1960s, Pakhtakor's squad was anchored by the striker Gennadiy Krasnitskiy, who led it to a 6th-place finish in 1962. After periods back and forth between the Top League and the Soviet First League, the club reached the final of the Soviet Cup competition in 1968 – the only Central Asian club to reach a Soviet Cup final – losing to Torpedo Moscow 1–0.[4][5]

In 1971, Pakhtakor again departed into the First League, but was not long detained in the lower division as it gained promotion the following year.[4]

Pakhtakor was the only Uzbek side to appear in the history of the USSR Championship during the Soviet era, appearing the highest echelon 22 times, and recording 212 wins, 211 draws, and 299 loses. Their best league finish was 6th place, which they achieved twice, in 1962 and 1982. 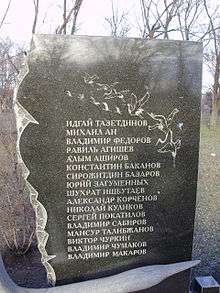 In August 1979, Pakhtakor made it back to the Soviet Top League, but shortly thereafter disaster struck the club and Soviet football. During a flight to play Dinamo Minsk, Pakhtakor's plane was involved in a mid-air collision over Dniprodzerzhynsk, Ukrainian SSR.[6] All 178 people aboard both planes involved died.[7]

Seventeen Pakhtakor players and staff members died in the crash:[8]

Annually, in August, the club sponsors a youth tournament in memory of the lives lost in the disaster.[9]

Following the tragedy in 1979 and spurred on by its prolific goalscorer Andrei Yakubik a few years later, Pakhtakor had its best record in 1982, finishing sixth and in front of several Russian and Ukrainian football powerhouses such as Zenit Saint Petersburg, CSKA Moscow, and Shakhtar Donetsk amongst the few. Pakhtakor had a point deducted that season due to exceeding the allowed limit for the games tied (drawn), but it did not influence the club's final standings.[7]

After leading Pakhtakor to its best finish, age finally caught up with Yakubik and he moved back to his hometown of Moscow to continue his football career.[10] With the departure of their great forward, the club struggled and spent six years in the Soviet First League. Although the discontent of their fans grew, Pakhtakor's reemergence as a major footballing force followed fast upon the dissolution of the Soviet Union.[4]

After the USSR collapsed, a new page began in the club's history. 1992 saw Pakhtakor participate in the first season of the Uzbek Oliy League. Since 1992 Pakhtakor have become the most successful Uzbek club with 10 Uzbek League titles, and 11 Uzbek Cups. Until 2014 the club is the only team to have participated in all seasons of the AFC Champions League since its inauguration in 2002. Since 2002 the club participated 11 times in AFC Champions League.

The participation in the AFC Champions League season 2011 was not successful. On 4 May 2011 in a match against Al-Nassr Pakhtakor lost and finished its Asian campaign. In that match, because of many injured players, Pakhtakor's coach Ravshan Khaydarov formed starting squad from youth team players and club made record in the AFC Champions League history as the youngest team of the tournament with average players age of 21,8. The average age of club players for season 2011 was 23,3.[11] In 2014–15 seasons Pakhtakor won its 10th and 11th League champion titles.

The match between Pakhtakor and Neftchi Farg'ona is held since 1992. The first match between the two clubs was played on 25 May 1992 in Tashkent.

Pakhtakor Markaziy Stadium was built in 1956 with capacity of 55.000 spectators. Stadium renovated in 1996. In July 2007 club management announced next renovation of stadium. Reconstruction works were finished in 2009, the amount of capacity was reduced to 35.000 and stadium became all-seater stadium. In January 2010, the stadium was chosen as best sporting facility 2009 of Uzbekistan.[12][13]

^ 1999 Uzbekistan Cup did not take place

The following players are listed as reserve players to play in 2014 Uzbek Youth League. They are registered for 2014 Uzbek League and are eligible to play for the first team.[16]