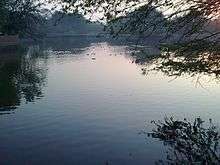 Fatehgarh is a cantonment town in Farrukhabad district in the state of Uttar Pradesh, India. It is located on the south bank of the Ganges River. It is the administrative headquarters of Farrukhabad District. Fatehgarh derives its name from an old fort. It is a small city with no significant industrial activity. The Indian Army has a big establishment there in the form of The Rajput Regimental Center, 114 Infantry Battalion TA and The Sikh Light Infantry Center.

Mriganka Sur (Newton Professor of Neuroscience, head of Brain and Cognitive Sciences, and director of the Simons Initiative on Autism and the Brain at MIT)