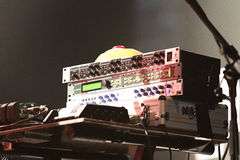 Auto-Tune is an audio processor created by Antares Audio Technologies which uses a proprietary device to measure and alter pitch in vocal and instrumental music recording and performances.[5] It was originally intended to disguise or correct off-key inaccuracies, allowing vocal tracks to be perfectly tuned despite originally being slightly off-key.

The processor slightly shifts pitches to the nearest true semitone (to the exact pitch of the nearest tone in traditional equal temperament). Auto-Tune can also be used as an effect to distort the human voice when pitch is raised or lowered significantly,[6] such that the voice is heard to leap from note to note stepwise, like a synthesizer.[7]

Auto-Tune is available as a plug-in for professional audio multi-tracking suites used in a studio setting and as a stand-alone, rack-mounted unit for live performance processing.[8] Auto-Tune has become standard equipment in professional recording studios.[9] Instruments like the Peavey AT-200 guitar are seamlessly using the Auto Tune technology for real time pitch correction.[10]

Auto-Tune was initially created by Andy Hildebrand, an engineer working for Exxon. Hildebrand developed methods for interpreting seismic data and subsequently realized that the technology could be used to detect, analyze, and modify the pitch in audio files.[6]

The earliest commercial use of Auto-Tune as a vocal effect in a popular song was Kid Rock's "Only God Knows Why" in 1998 and later on in Cher's "Believe" and Daft Punk's "One More Time". The effect is not to be confused with a vocoder or the talk box,[11] devices referenced by producers of these songs when they were new to hide their use of Auto-Tune from music audiences. For example, in an early interview, the producers of "Believe" claimed they had used a DigiTech Talker FX pedal, in what Sound on Sound’s editors felt was an attempt to preserve a trade secret.[12] After the success of "Believe" the technique became known as the "Cher Effect".[13][14] Originally, Auto-Tune was designed to discreetly correct imprecise intonations, but Cher's producers used it to "exaggerate the artificiality of abrupt pitch correction." This technique soon became a widespread technique used in live performances and in pop recordings throughout the first ten years of the 21st century.[15]

While working with Cher on the song "Believe" in 1998, producers Mark Taylor and Brian Rawling discovered that if they set Auto-Tune on its most aggressive setting, so that it corrected the pitch at the exact moment it received the signal, the result was an unsettlingly robotic tone.
— Greg Milner (2009)[16]

According to Chris Lee of the Los Angeles Times, "Believe" is "widely credited with injecting Auto-Tune's mechanical modulations into pop consciousness."[17] In the year 2000, the single "Naive Song" performed by Mirwais Ahmadzai from his album Production (Mirwais LP) is the first ever track using Auto-Tune on the complete vocals.[18][19] The use of Auto-Tune as a vocal effect was bolstered in the late 2000s by hip hop/R&B recording artist T-Pain who elaborated on the effect and made active use of Auto-Tune in his songs.[20] He cites new jack swing producer Teddy Riley and funk artist Roger Troutman's use of the Talk Box as inspirations for his own use of Auto-Tune.[17] T-Pain became so associated with Auto-Tune that he has an iPhone App named after him that simulates the effect, called "I Am T-Pain".[21] Auto-Tune has since been used in other hip hop/R&B artists' works, including Snoop Dogg's single "Sexual Eruption",[22] Lil Wayne's "Lollipop",[23] and Kanye West's album 808s & Heartbreak.[24]

The effect has also become popular in raï music and other genres from Northern Africa.[25]

According to the Boston Herald, country stars Faith Hill, Shania Twain, and Tim McGraw all use Auto-Tune in performance, calling it a safety net that guarantees a good performance.[26] However, other country music singers, such as Allison Moorer, Trisha Yearwood, Vince Gill, Garth Brooks and Martina McBride, have refused to use Auto-Tune.[27]

At the 51st Grammy Awards in early 2009, the band Death Cab for Cutie made an appearance wearing blue ribbons to protest the use of Auto-Tune in the music industry.[30] Later that spring, Jay-Z titled the lead single of his album The Blueprint 3 as "D.O.A. (Death of Auto-Tune)". Jay-Z elaborated that he wrote the song under the personal belief that far too many people had jumped on the Auto-Tune bandwagon, and that the trend had become a gimmick.[31][32] Christina Aguilera appeared in public in Los Angeles on August 10, 2009 wearing a T-shirt that read "Auto Tune is for Pussies". When later interviewed by Sirius/XM, however, she said that Auto-Tune wasn't bad if used "in a creative way" and noted her song "Elastic Love" from Bionic uses it.[33]

Opponents of the plug-in have argued that Auto-Tune has a negative effect on society's perception and consumption of music. In 2004, UK's The Daily Telegraph music critic Neil McCormick called Auto-Tune a "particularly sinister invention that has been putting extra shine on pop vocals since the 1990s" by taking "a poorly sung note and transpos[ing] it, placing it dead centre of where it was meant to be".[34]

In 2009, Time magazine quoted an unnamed Grammy-winning recording engineer as saying, "Let's just say I've had Auto-Tune save vocals on everything from Britney Spears to Bollywood cast albums. And every singer now presumes that you'll just run their voice through the box." The same article expressed "hope that pop's fetish for uniform perfect pitch will fade", speculating that pop-music songs have become harder to differentiate from one another, as "track after track has perfect pitch."[35] According to Tom Lord-Alge the device is used on nearly every record these days.[16]

In 2010, the British television reality TV show The X Factor admitted to using Auto-Tune to improve the voices of contestants.[36][37] Simon Cowell, one of the show's bosses, ordered a ban on Auto-Tune for future episodes.[38] Also in 2010, Time magazine included Auto-Tune in their list of "The 50 Worst Inventions".[39]

Neko Case in a 2006 interview with Pitchfork Media gave an example of how prevalent pitch correction is in the industry:

I'm not a perfect note hitter either but I'm not going to cover it up with Auto-Tune. Everybody uses it, too. I once asked a studio guy in Toronto, 'How many people don't use Auto-Tune?' and he said, 'You and Nelly Furtado are the only two people who've never used it in here.' Even though I'm not into Nelly Furtado, it kind of made me respect her. It's cool that she has some integrity.[40]

Used by stars from Snoop Dogg and Lil Wayne to Britney Spears and Rihanna, the use of Auto-Tune has been widely criticized as indicative of an inability to sing on key.[14][41][42][43][44] Trey Parker used Auto-Tune on the South Park song "Gay Fish", and found that he had to sing off-key in order to sound distorted; he claimed, "You had to be a bad singer in order for that thing to actually sound the way it does. If you use it and you sing into it correctly, it doesn't do anything to your voice."[45] Electropop recording artist Ke$ha has been widely recognized as using excessive Auto-Tune in her songs, putting her vocal talent under scrutiny.[28][41][46][47][48][49] Music producer Rick Rubin wrote that "Right now, if you listen to pop, everything is in perfect pitch, perfect time and perfect tune. That's how ubiquitous Auto-Tune is."[29] Time journalist Josh Tyrangiel called Auto-Tune "Photoshop for the human voice."[29]

Big band singer Michael Bublé criticized Auto-Tune as making everyone sound the same – "like robots" – but admits he uses it when he records pop-oriented music.[50]

Despite its negative reputation, some critics have argued that Auto-Tune opens up new possibilities in pop music, especially in hip-hop and R&B. Instead of using it as a crutch for poor vocals—its originally designed purpose—some musicians intentionally use the technology to mediate and augment their artistic expression. When French house duo Daft Punk was questioned about their use of auto-tune in their single "One More Time", Thomas Bangalter replied by saying, "A lot of people complain about musicians using Auto-Tune. It reminds me of the late '70s when musicians in France tried to ban the synthesizer... What they didn't see was that you could use those tools in a new way instead of just for replacing the instruments that came before."[51]

Although Auto-Tune is used by a variety of artists, Bradley Regina states it can be particularly useful for black artists to have more control of their voice's sound and change it to fit the mood of the song. This is seen in two notable examples, in the works of Kanye West and T-Pain.[52]

T-Pain, the R&B singer and rapper who reintroduced the use of Auto-Tune as a vocal effect in pop music with his album Rappa Ternt Sanga in 2005, says "My dad always told me that anyone's voice is just another instrument added to the music. There was a time when people had seven-minute songs and five minutes of them were just straight instrumental. ... I got a lot of influence from [the '60s era] and I thought I might as well just turn my voice into a saxophone."[53] Following in T-Pain's footsteps, Lil Wayne experimented with Auto-Tune between his albums Tha Carter II and Tha Carter III. At the time, he was heavily addicted to promethazine codeine, and some critics see Auto-Tune as a musical expression of Wayne's loneliness and depression.[54] Mark Anthony Neal writes that Lil Wayne’s vocal uniqueness, his "slurs, blurs, bleeps and blushes of his vocals, index some variety of trauma."[55] And Kevin Driscoll asks, "Is Auto-Tune not the wah pedal of today's black pop? Before he transformed himself into T-Wayne on "Lollipop", Wayne's pop presence was limited to guest verses and unauthorized freestyles. In the same way that Miles equipped Hendrix to stay pop-relevant, Wayne's flirtation with the VST plugin du jour brought him updial from JAMN 94.5 to KISS 108.”[56]

Kanye West's 808s & Heartbreak was generally well received by critics, and it similarly used Auto-Tune to represent a fragmented soul, following his mother's death.[57] The album marks a departure from his previous album Graduation. Describing the album as a breakup album, Rolling Stone music critic Jody Rosen writes, "Kanye can't really sing in the classic sense, but he's not trying to. T-Pain taught the world that Auto-Tune doesn't just sharpen flat notes: It's a painterly device for enhancing vocal expressiveness, and upping the pathos... Kanye's digitized vocals are the sound of a man so stupefied by grief, he's become less than human."[58]

Satirist Weird Al Yankovic poked fun at the over-use of Auto-Tune, while commenting that it seemed here to stay, in a YouTube video commented on by various publications such as Wired.[61]

Starting in 2009, the use of Auto-Tune to create melodies from the audio in video newscasts was popularized by Brooklyn musician Michael Gregory, and later by the band The Gregory Brothers in their series Songify the News. The Gregory Brothers digitally manipulated recorded voices of politicians, news anchors, and political pundits to conform to a melody, making the figures appear to sing.[62][63] The group achieved mainstream success with their "Bed Intruder Song" video, which became the most-watched YouTube video of 2010.[64]