For other uses, see Coat (disambiguation).
Not to be confused with Overcoat, a garment meant solely as an outer garment. 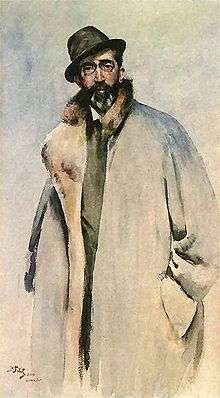 A coat is a garment worn by both men and women,[1] for warmth or fashion. Coats typically have long sleeves and are open down the front, closing by means of buttons, zippers, hook-and-loop fasteners, toggles, a belt, or a combination of some of these. Other possible features include collars, shoulder straps and hoods. Persians were the first people that made coats.

Coat is one of the earliest clothing category words in English, attested as far back as the early Middle Ages. (See also Clothing terminology.) The Oxford English Dictionary traces coat in its modern meaning to c. 1300, when it was written cote. The word coat stems from Old French and then Latin cottus.[2] It originates from the Proto-Indo-European word for woolen clothes.

An early use of coat in English is coat of mail (chainmail), a tunic-like garment of metal rings, usually knee — or mid-calf length.

The medieval and renaissance coat (generally spelled cote by costume historians) is a midlength, sleeved men's outer garment, fitted to the waist and buttoned up the front, with a full skirt in its essentials, not unlike the modern coat.[4]

By the eighteenth century, overcoats had begun to supplant capes and cloaks as outerwear, and by the mid-twentieth century the terms jacket and coat became confused for recent styles; the difference in use is still maintained for older garments.

In the early 19th century, coats were divided into under-coats and overcoats. The term under-coat is now archaic but denoted the fact that the word coat could be both the outermost layer for outdoor wear (overcoat) or the coat worn under that (under-coat). However, the term coat has begun to denote just the overcoat rather than the under-coat.[1] The older usage of the word coat can still be found in the expression "to wear a coat and tie",[5] which does not mean that wearer has on an overcoat. Nor do the terms tailcoat, morning coat or house coat denote types of overcoat. Indeed, an overcoat may be worn over the top of a tailcoat. In tailoring circles, the tailor who makes all types of coats is called a coat maker. Similarly, in American English, the term sports coat is used to denote a type of jacket not worn as outerwear (overcoat) (sports jacket in British English).

The term jacket is a traditional term usually used to refer to a specific type of short under-coat.[6] Typical modern jackets extend only to the upper thigh in length, whereas older coats such as tailcoats are usually of knee length. The modern jacket worn with a suit is traditionally called a lounge coat (or a lounge jacket) in British English and a sack coat in American English. The American English term is rarely used. Traditionally, the majority of men dressed in a coat and tie, although this has become gradually less widespread since the 1960s. Because the basic pattern for the stroller (black jacket worn with striped trousers in British English) and dinner jacket (tuxedo in American English) are the same as lounge coats, tailors traditionally call both of these special types of jackets a coat.

An overcoat is designed to be worn as the outermost garment worn as outdoor wear;[7] while this use is still maintained in some places, particularly in Britain, elsewhere the term coat is commonly used mainly to denote only the overcoat, and not the under-coat. A topcoat is a slightly shorter overcoat, if any distinction is to be made. Overcoats worn over the top of knee length coats (under-coats) such as frock coats, dress coats, and morning coats are cut to be a little longer than the under-coat so as to completely cover it, as well as being large enough to accommodate the coat underneath.

The length of an overcoat varies: mid-calf being the most frequently found and the default when current fashion isn't concerned with hemlines. Designs vary from knee-length to the ankle length briefly fashionable in the early 1970s and known (to contrast with the usurped mini) as the "maxi".[8]

Speakers of American English sometimes informally use the words jacket and coat interchangeably.[9]

Some of these styles are still worn. Note that for this period, only coats of the under-coat variety are listed, and overcoats are excluded.

The terms coat and jacket are both used around the world. The modern terms "jacket" and "coat" are often used interchangeably as terms, although the term "coat" tends to be used to refer to longer garments.