"Buddha as an avatar of Vishnu" redirects here. For other uses, see Buddha (disambiguation). 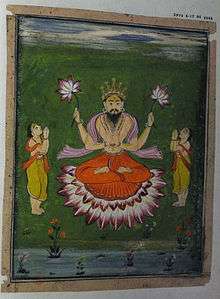 Gautama Buddha as an avatar of Vishnu.

Gautama Buddha is viewed as an avatar of the god Vishnu in Vaishnava Hinduism. Buddhist teachings do not rely on the Vedas, are non-theistic[1][2][3] and deny the reality of the self or Ātman; consequently, Hindu philosophers classified Buddhism as nāstika or heterodoxy within the scheme of Hinduism.[4]

The Buddha is described in important Hindu scriptures, including almost all the major puranas. However, "not all of them refer to the same person: some of them refer to other persons, and some occurrences of 'buddha' simply mean 'a person possessing buddhi'; most of them, however, refer specifically to the founder of Buddhism."[5] They portray him with two roles: preaching non-theistic Vedic views in order to restore the Dharma and criticizing animal sacrifice.[6] A partial list of major Puranic references of the Buddha is as follows:

In the Puranic texts, he is mentioned as one of the ten Avatars of Vishnu, usually as the ninth one. Another important scripture that mentions him as an avatar is Parashara's Brihat Parashara Hora Shastra (2:1-5/7).

Buddha is often described as a yogi or yogācārya and as a sannyāsi. His father is usually called Śuddhodhana, which is consistent with the Buddhist tradition, while in a few places the Buddha's father is named Añjana or Jina. He is described as beautiful (devasundararūpa), of yellow skin, and wearing brown-red or red robes.[10]

Only a few statements mention the worship of Buddha, e.g. the Varahapurana states that one desirous of beauty should worship him.[11] In some of the puranas, he is described as having taken birth to "mislead the demons":

To delude the demons, he stood on the path in the form of a child. The foolish Jina (a demon), imagined him to be his son. Thus the lord Sri Hari expertly deluded Jina and other demons by his strong words of non-violence.

In the Bhagavata Purana, Buddha is said to have taken birth to restore the devas to power:

Then, in the beginning of Kali-yuga, for the purpose of confusing the enemies of the devas, [he] will become the son of Anjana, Buddha by name, in the Kīkaṭas.[7]

In many puranas, the Buddha is described as an incarnation of Vishnu who incarnated in order to bring either demons or mankind close to the Vedic dharma. The Bhavishya Purana contains the following:

At this time, reminded of the Kali Age, the god Vishnu became born as Gautama, the Shakyamuni, and taught the Buddhist dharma for ten years. Then Shuddodana ruled for twenty years, and Shakyasimha for twenty. At the first stage of the Kali Age, the path of the Vedas was destroyed and all men became Buddhists. Those who sought refuge with Vishnu were deluded.[12]

As an avatar of Vishnu 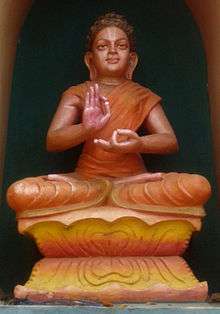 Buddha as an avatar at Dwaraka Tirumala 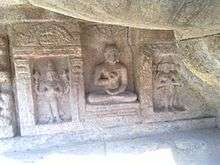 Buddha as an avatara at Airavatesvara Temple
Main article: Dashavatara

In 8th-century royal circles, the Buddha started to be replaced by Hindu gods in pujas:

"[B]efore the eighth century, the Buddha was accorded the position of universal deity and ceremonies by which a king attained to imperial status were elaborate donative ceremonies entailing gifts to Buddhist monks and the installation of a symbolic Buddha in a stupa.... This pattern changed in the eighth century. The Buddha was replaced as the supreme, imperial deity by one of the Hindu gods (except under the Palas of eastern India, the Buddha's homeland)... Previously the Buddha had been accorded imperial-style worship (puja). Now as one of the Hindu gods replaced the Buddha at the imperial centre and pinnacle of the cosmo-political system, the image or symbol of the Hindu god comes to be housed in a monumental temple and given increasingly elaborate imperial-style puja worship."[13]

In the Dasavatara stotra section of his Gita Govinda, the influential Vaishnava poet Jayadeva (13th century) includes the Buddha amongst the ten principal avatars of Vishnu and writes a prayer regarding him as follows:

O Keshava! O Lord of the universe! O Lord Hari, who have assumed the form of Buddha! All glories to You! O Buddha of compassionate heart, you decry the slaughtering of poor animals performed according to the rules of Vedic sacrifice.[15]

This viewpoint of the Buddha as the avatar who primarily promoted ahimsa remains a popular belief amongst a number of modern Vaishnava organisations, including the International Society for Krishna Consciousness.[16]

As an inspirational figure

Other prominent modern proponents of Hinduism, such as Sarvepalli Radhakrishnan and Swami Vivekananda, consider the Buddha as an example of the same universal truth that underlies religions:

Vivekananda: May he who is the Brahman of the Hindus, the Ahura Mazda of Zoroastrians, the Buddha of Buddhists, the Jehovah of the Jews, the Father in Heavens of Christians, give strength to you to carry out your noble ideas![17]

Radhakrishnan: If a Hindu chants the Vedas on the banks of the Ganges... if the Japanese worship the image of Buddha, if the European is convinced of Christ's mediatorship, if the Arab reads the Koran in the mosque... It is their deepest apprehension of God and God's fullest revelation to them.[18]

A number of revolutionary figures in modern Hinduism, including Mahatma Gandhi, have been inspired by the life and teachings of the Buddha and many of his attempted reforms.[19]

Steven Collins sees such Hindu claims regarding Buddhism as part of an effort - itself a reaction to Christian proselytizing efforts in India - to show that "all religions are one", and that Hinduism is uniquely valuable because it alone recognizes this fact.[20] Helmuth von Glasenapp attributed these developments to a Hindu desire to absorb Buddhism in a peaceful manner, both to win Buddhists to Vaishnavism and also to account for the fact that such a significant heresy could exist in India.[21]

The times ascribed to one "Buddha" figure are contradictory and some put him in approximately 500 CE, with a lifetime of 64 years, describe him as having killed some persons, as following the Vedic religion, and having a father named Jina, which suggest that this particular figure might be a different person from Siddhārta Gautama.[22]

Kumārila Bhaṭṭa disregarded the connection of Buddha with Hinduism; he regarded Buddha as the one who "transgressed dharma laid down for ksatriyas and he took himself to the profession of a religious teacher, one who 'deceives himself' and acts contrary to the Vedas".[23]

K. Sri Dhammananda, a popular Sri Lankan Buddhist monk and scholar alleged that some orthodox religious people tried to condemn the Buddha because of his liberal teachings but when they couldn't succeed in their goals they tried to reduce his reputation by introducing him as one of the reincarnation of their gods. Their motive was to absorb Buddhism into their religion. He further expresses that this strategy worked in India to uproot Buddhism from the land of its origin. [25]

Narada Maha Thera, a Buddhist monk and translator born in Sri Lanka rejects the claim that Buddha was an incarnation of Hindu God Vishnu or a Savior as is believed by some Hindu followers. He remarks that the Buddha taught his disciples to be dependent on themselves for their liberation and not on any external deity who could liberate or save them from the result of their evil deeds because according to Buddha purification and defilement depend on oneself. He expresses that Buddha clearly taught his disciples that Buddha is only a teacher and it is us who ultimately will have to walk on the path of liberation. [26]

In 1999, at the Maha Bodhi Society in Sarnath, Jayendra Saraswathi of Kanchi Kamakoti Peetham and S. N. Goenka, after having a mutual discussion, gave a joint communiqué agreeing on the following three points.[27]

We agree on all the three things mentioned above and wish that all the people of India from all the traditions should have cordial relations and the neighbouring countries should also have friendly relations with India.