Dhanvantari is an avatar of Vishnu in Hinduism. He appears in the Vedas and Puranas as the physician of the gods (devas), and the god of Ayurveda. It is common practice in Hinduism for worshipers to pray to Dhanvantari seeking his blessings for sound health for themselves and/or others, especially on Dhanteras.

Bhagavata Purana states that Dhanvantari emerged from the Ocean of Milk and appeared with the pot of amrita (nectar) during the story of the Samudra (or) Sagara Mathana whilst the ocean was being churned by the Devas and Asuras, using the Mandara mountain and the serpent Vasuki. The pot of Amrita was snatched by the Asuras, and after this event another avatar, Mohini, appears and takes the nectar back from the Asuras. It is also believed that Dhanvantari promulgated the practise of Ayurveda.[1]

According to the ancient Sanskrit work Vishnudharamottara, Dhanvantari is a handsome individual and should usually be depicted with four hands, with one of them carrying Amrita, the ambrosia of god. Dhanvantari is depicted as Vishnu with four hands, holding Shankha, Chakra, Jalauka (leech) and a pot containing rejuvenating nectar called amrita. He is often shown with a leech in his hand rather than the scriptures.[1] 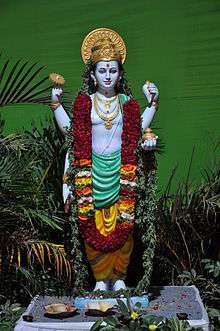 An idol of Dhanvantari at an Ayurveda Expo in Bangalore

His birthday is celebrated by the practitioners of Ayurveda every year, on Dhanteras, two days before Diwali, the Hindu festival of lights.

Statue of Dhanvantari at Taxakeshwar temple

There are a few dedicated temples to Dhanvantari in South India especially in Kerala and Tamil Nadu, where ayurveda is highly practised and patronised. The Dhanvatari temple in Thottuva in Kerala is a particularly famous temple, where Lord Dhanvatari idol is almost six feet tall and facing east. On the right hand the lord holds Amrith and with the left hand the lord holds Atta, Shanku and Chakra. The 'Ekadasi'day celebration, which falls on the same day as the 'Guruvayur Ekadasi' is of special significance.

In Tamil Nadu, in the courtyard of Sri Ranganathaswamy Temple (Srirangam), there is a Dhanvantari shrine where daily worship of the deity is performed. In front of this temple there is an engraved stone believed to be from the 12th century. According to the writings on the stone, Garuda Vahana Bhattar, a great ayurvedic physician, established the statue inside the temple. A prasada or theertham, a herbal decoction, is given to the visitors. The shrine is the oldest Dhanvantari shrine in the state.[2] Another Dhanvantari shrine is found in the second precinct of Varadaraja Perumal Temple in Kanchipuram.[3]

Dhanvanthari temples in Kerala, Tamil Nadu and Puducherry include:

In Varanaseya Sanskrit Vishwavidyalaya, Varanasi, Uttar Pradesh state, one statue of Dhanvantari is present in the University museum. Two statues are at the headquarters of the Central Council for Research in Ayurveda and Siddha at New Delhi. There is another statue inside the Ayurveda Maha Sammelan office, Dhanawantari Bhawan at New Delhi and one statue of Dhanvantari is present at Mohyal Ashram in Haridwar.

One Black stoned statue facing south is also located in a personal property of a Brahman family in Chowk area, varanasi. It's said that the Idol was found beneath the premises of that property when it was getting constructed and the Brahman couldn't figure out who it was hence decided to have it drifted in Ganga next morning, however same night lord came in his dream and introduced himself as KashiRaja Devodas(Dhanvantari) and asked to leave the statue where it was found, hence he built this temple in his house which very few in that area are aware. Among all, this temple seems to be most divine and spiritual as the idol emerged on its own and the story associated with it.