The Linga Purana (लिंग पुराण, IAST: Liṅga Purāṇa) one of the eighteen Mahapuranas, and a Shaivism text of Hinduism.[1][2] The text's title Linga refers to the iconography for Shiva.[1][3]

The author(s) and date of the Linga Purana is unknown, and the estimates place the original text to have been composed between the 5th- to 10th-century CE. The text exists in many inconsistent versions, and was likely revised over time and expanded.[2][4] The extant text is structured into two parts, with a cumulative total of 163 chapters.[5]

The text presents cosmology, mythology, seasons, festivals, geography, a tour guide for pilgrimage (Tirtha), a manual for the design and consecration of the Linga and Nandi, stotras, the importance of these icons, a description of Yoga with claims of its various benefits.[1][2][6]

The estimate composition dates for the oldest core of Linga Purana vary between scholars, ranging from the 5th-century CE to 10th-century.[2][7]

Like all the Puranas, the Linga Purana, has a complicated chronology. Dimmitt and van Buitenen state that each of the Puranas is encyclopedic in style, and it is difficult to ascertain when, where, why and by whom these were written:[4]

The Linga Purana survives in many versions, consisting of two parts – the Purva-bhaga (older part, sometimes called Purvardha) with 108 chapters and Uttara-bhaga (later part, sometimes called Uttarardha) with 55 chapters.[1][5] However, the manuscripts of the text assert in verse 2.55.37 that the Uttara-bhaga only has 46 chapters, suggesting that the text was expanded over time.[5] Some scholars suggest that the entire Uttara-bhaga may be a later insertion or attachment to the older part.[5]

The text is titled after its theme, that is the worship of Linga, and the text is primarily focussed on Shiva as Supreme.[1][8] However, along with Shiva-related themes, the Linga Purana includes chapters dedicated to Vedic themes, as well as includes reverence for Vishnu and Brahma.[5][9] 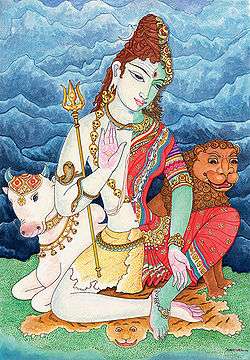 The Linga Purana discusses the idea of Ardhanarishvara (above), asserting that the goddess is the mother of the universe and she is the altar of the god. God and goddess, linga and yoni, are co-creators of the universe, both centers of power and divine splendor, states the text.[10]

Linga, states Alain Daniélou, means sign.[11] It is an important concept in Hindu texts, wherein Linga is a manifested sign and nature of someone or something. It accompanies the concept of Brahman, which as invisible signless and existent Principle, is formless or linga-less.[11] The Linga Purana states, "Shiva is signless, without color, taste, smell, that is beyond word or touch, without quality, motionless and changeless".[11] The source of the universe is the signless, and all of the universe is the manifested Linga, a union of unchanging Principles and the ever changing nature.[11] The Linga Purana text builds on this foundation.[12]

The Linga Purana consists of two parts – the longer Purva-bhaga and the shorter Uttara-bhaga.[1][5] They discuss diverse range of topics, and illustrative sections include:

Giving help to everyone,
showing kindness to all,
is called the highest worship
of the Lord of eight forms.

The Linga Purana is notable for its aggressiveness in retaliating against those who censure Shiva, suggesting in chapter 1.107 that Shiva devotee should be willing to give his life to end the censorship of Shiva, if necessary with violence against those who censure Shiva.[5] In Chapter 1.78, the text also emphasizes the virtues of non-violence, stating, "violence should be avoided always, and at all places."[21]

The Linga Purana's ideas incorporate, states Stella Kramrisch, those of the Samkhya school of Hindu philosophy.[12] The chapter 1.17 of the Linga Purana introduces Linga as Pradhana or Prakriti (cosmic substance), while Shiva is described as Lingin, or one with this "subtle body".[12] Linga is presented by the text as an abstract concept, contrasted with Alinga (Vyakta), along with its phallic significance and sexual truth in nature's process of life creation. The verses of the text, states Kramrisch, presents Linga as an aniconic symbol of both the matter and the spirit, the Prakriti and the Purusha, whereby the "powers of creation, liberation and annihilation" are symbolized by the icon.[12]