Ghōr (Pashto/Persian: غور‎‎), also spelled Ghowr or Ghur, is one of the thirty-four provinces of Afghanistan. It is located in central Afghanistan, towards the north-west. The province contains ten districts, encompassing hundreds of villages, and approximately 657,200 settled people.[2] Chaghcharan serves as the capital of the province.

Mandesh is the historical name by which the mountain region of Ghor was called.[3]

The inhabitants of Ghor were completely Islamized during the Ghurids era. Before the 12th century, the area was home to Hindus, Zoroastrians, Buddhists, and a small number of Jews. Remains of the oldest settlements discovered by Lithuanian archaeologists in 2007 and 2008 in Ghor date back to 5000 BC.[4] Ruins of a few castles and other defense fortifications were also discovered in the environs of Chaghcharan. A Buddhist monastery hand-carved in the bluff of the river Harirud existed in the first centuries during the prevalence of Buddhism. The artificial caves revealed testimony of daily life of the Buddhist monks.[5]

The rise to power of the Ghurids at Ghur, a small isolated area located in the mountain vastness between the Ghaznavid empire and the Seljukids, was an unusual and unexpected development. The area was so remote that till the 11th century, it had remained a pagan enclave surrounded by Muslim principalities. It was converted to Islam in the early part of the 12th century after Mahmud raided it, and left teachers to instruct the Ghurids in the precepts of Islam. Even then it is believed that paganism, i.e. a variety of Mahayana Buddhism persisted in the area till the end of the century.[6]

Various scholars and historians such as John McLeod attribute the conversion of the Ghauris to Islam at the hands of Mahmud Ghazni who converted them to Islam after his conquest of Ghor: a people from central Afghanistan who had been converted to Islam by Mahmud.[7]

Traditional Muslim historians such as Istakhri and Ibn Haukal attest to the existence of the non-Islamic enclave of Ghor prior to the time of Ghazni, who is attributed with converting its population to Islam.

Ghor: Also called Ghoristan. The mountainous country between Hirat and Ghazni. According to Istakhri and Ibn Haukal it was a rugged mountainous country , bounded by the districts of Hirat, Farrah, Dawar, Rabat, Kurwan, and Gharjistan back to Hirat, which were all Muhammadan countries. Ghor itself was a country of infidels, containing only a few Musulmans, and the inhabitants spoke a language different from that of Khurasan.[8]

Minhaju-S-Siraj records the strife between the non-Muslim and Muslim populations.

It is said that Amir Suri was a great king and most of the territories of Ghor were in his possession. But as most of the inhabitants of Ghor of High and low degree had not yet embraced Islam, there was constant strife among them. The Saffarians came from Nimroz to Bust and Dawar, Yakub Lais overpowered Lak-Lak, who was the chief of Takinabad, in the country of Rukhaj. The Ghorians sought the safety in Sara-sang and dwelt there in security but even among them hostilities constantly prevailed between the Muslims and the infidels. One castle was at war with another castle, and their feuds were unceasing; but owing to the inaccessibility of the mountains of Rasiat, which are in Ghor no foreigner was able to overcome them, and Shansbani Amir Suri was the head of all the Mandeshis.[9]

According to Minhahu-S Siraj, Amir Suri was captured by Mahmud of Ghazni, made prisoner along with his son and taken to Ghazni, where Amir Suri died.[10]

The region had previously been conquered by Mahmud of Ghazni, and the population converted to Islam.[11]

It was also the last stronghold of an ancient religion professed by the inhabitants when all their neighbors had become Muhammadan. In the 11th century AD Mahmud of Ghazni defeated the prince of Ghor Ibn–I-Suri, and made him prisoner in a severely contested engagement in the valley of Ahingaran. Ibn-I-Suri is identified a Hindu by the author, who has recorded his overthrow.[12] 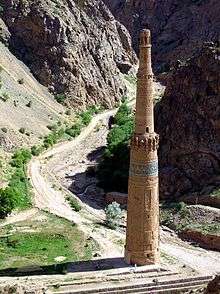 The Minaret of Jam built by the Ghurid Dynasty

In 1011, 1015 and 1020, both Mahmud and Mas'ud I led expeditions into Ghur and established Islam in place of the indigenous paganism. After this, Ghur was considered a vassal state of the Ghaznavid empire.[13] During the reign of 'Abd ar Rashi and the usurper Toghrul, Ghur and Gharchistan gained autonomy.[14]

Ghor was also the centre of the Ghurid dynasty in the 12th and 13th century. The remains of their capital Firuzkuh, which was sacked and destroyed by the Mongols in 1222, includes the Minaret of Jam, a UNESCO World Heritage site.

In June 2004, hundreds of troops of Abdul Salaam Khan, who had rejected the Afghan government's plan to disarm regional militias, attacked Chaghcharan and took over the city in an afternoon-long siege. Eighteen people were killed or wounded in the fighting, at which point Governor Mohammed Ibrahim fled. Three days later the Afghan government announced that it would not retake Chaghcharan. Khan and Ibrahim began negotiations soon after, but reached no agreements. Khan's troops left Chaghcharan on June 23, a day ahead of when an Afghan National Army battalion, led by Lieutenant-General Aminullah Paktiyanai, arrived with the support of about twenty U.S. soldiers.

A Lithuanian contingent of the International Security Assistance Force was stationed in the province for a number of years. The base in Chaghcharan was called FOB Whiskey. The Coalition Force was composed of Ukrainians, Georgians, Swedes, Lithuanians, and a few other individual assignees from other nations who rotate in and out. There was also a small semi-permanent US contingent stationed there. By 2015, these NATO forces had all left the province for the Afghan National Security Forces (ANSF) to take over responsibility.

Further information: List of governors of Ghor and Politics of Afghanistan

The former governor of the province is Sima Joinda. Her predecessor was Sayed Anwar Rahmati. She is the first women appointed as governor of Ghor and the third women in the country holding position of governor. She was replaced by the current governor Ghulam Nasir Khaze in December 21, 2015. The town of Firozkoh is the capital of Ghor province. All law enforcement activities throughout the province are controlled by the Afghan National Police (ANP). The police chief represents the Ministry of the Interior in Kabul. The ANP is backed by other Afghan National Security Forces, including the NATO-led forces.

As of September 2014, Chaghcharan Airport, located at the provincial capital of Chaghcharan, had regularly scheduled flights to Kabul and Herat.

Ghor province has a significant number of female drivers compared to the other provinces.

As of 2013, roads in the province remained largely undeveloped, unpaved and often lacked bridges over rivers.[15]

Agriculture and animal husbandry are the primary economic activities in Ghor Province. According to the United Nations, many young men were forced to leave the province to find work in Herat or Iran and a small percentage of the population were teachers, government officials, carpet weavers, carpenters and tailors. Over half of the population could not cover their basic needs with their level of income.[16] Opium production had returned to the region following the Taliban's departure as locals attempted to increase their incomes by farming a more economically lucrative crop.[16]

Ghor University that first established as Ghor Higher Education Institute then promoted to Ghor University has around 500 students with a significant number of girls. There are also a number of Teacher Training Institutes in Firuzkoh, Taywara and Lal districts. The number of high schools increased in last the 10 years and attendance in university entrance exams (Kankor) jumped from hundreds to thousands of students. Several agriculture and mechanical schools were also established. There is only one nursing school that train young female high school graduates for midwifery and nursing that is part of Ministry of Public Health and run by a NGO in association with Ghor provincial hospital.

The population of Ghor today is about 635,302 people, consisting of Tajiks, Hazaras, Uzbeks and small community of Pashtuns.[18][19][20] Tajiks are the majority ethnic group in the province.[19][21] about 80% of the population of the province follow Sunni Islam and the remaining 20% are Shias.

Ghor occupies the end of the Hindu Kush mountains. Ghor is 2,500 metres above sea level and heavy snowfalls often block many of its rugged passes from November to April. It is also a drought-prone area in the summer. 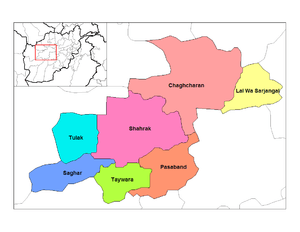 Districts of Ghor prior to the 2005 subdivision of Chaghcharan District.

Football, volleyball, basketball, tennis, taekwondo and karate are all official sports of the province. In July 2010, the Ghor Province cricket team was founded and will represent the province in future domestic tournaments.[23]