This is a list of high school athletic conferences in Ohio, separated by Ohio High School Athletic Association (OHSAA) region.[1] Some conferences have schools in multiple regions, and will be listed in all applicable regions. However, the conference information is on the region page where the most schools are classified in.

Conference membership in Ohio is voluntary, rather than assigned by the state association like in some states. While this ensures that many rivalries stay intact regardless of classification changes, it also means schools can choose to change conferences pending acceptance into a different conference, or in rare cases, can be forced out of a conference. This can explain why some conferences have a lengthy list of former members, and the number of defunct conferences. 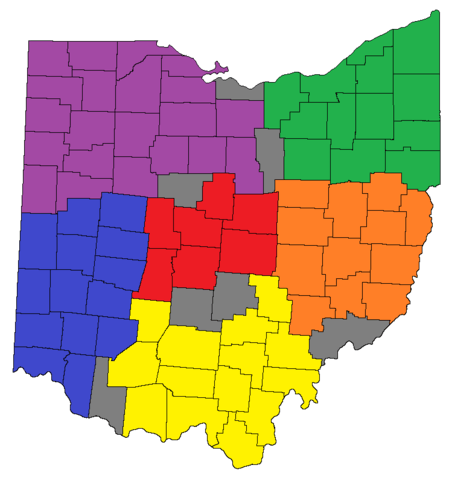 The six OHSAA regions. The Central is in red, East in orange, Northeast in green, Northwest in purple, Southeast in yellow, and Southwest in blue. Counties that are in gray are split between two regions.

This region includes the counties of Delaware, Franklin, Knox, Licking, Madison, Morrow, and Union, as well as schools within Fairfield, Marion, and Pickaway counties. While the Central Region includes a small number of conferences, many of these leagues contain many schools with multiple divisions.

The East region includes the counties of Belmont, Carroll, Coshocton, Guernsey, Harrison, Holmes, Jefferson, Monroe, Morgan, Muskingum, Noble, and Tuscarawas, as well as schools within Washington County. The Southeast region includes the counties of Adams, Athens, Fayette, Gallia, Highland, Hocking, Jackson, Lawrence, Meigs, Perry, Pike, Ross, Scioto, and Vinton, as well as schools within Brown, Fairfield, Pickaway, and Washington counties. Due to the low amount of conferences separately, and the number of conferences that contain members of both regions, these two regions are combined onto one page.