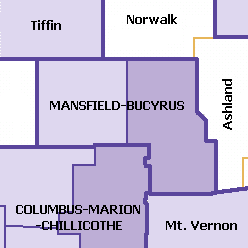 This area also has a strong commuter interchange with Cleveland and Columbus and their metropolitan areas.

All communities and townships