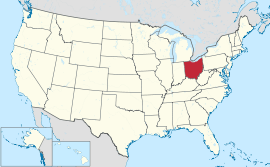 Map of the United States with Ohio highlighted

Ohio is a state located in the Midwestern United States. According to the 2010 United States Census, Ohio is the 7th most populous state with 7007115367250000000♠11,536,725 inhabitants but the 35th largest by land area spanning 40,860.69 square miles (105,828.7 km2) of land.[1] Ohio is divided into 88 counties and contains 938 incorporated municipalities consisting of cities and villages.[2] Municipality names are not unique: there is a village of Centerville and a city of Centerville; also a city of Oakwood and two similarly named villages: Oakwood, Cuyahoga County, Ohio and Oakwood, Paulding County, Ohio.