The county is named for the Auglaize River. Some sources say it is a corruption of the French description of the clay (glaise) water (eau),[5] whereas others say it comes from a Native American word meaning 'fallen timbers'.[1][6] Another weak possibility according to Lakehistory.info is that it could have been the French term la glace [*aux glaces?], which means 'mirror', or 'ice' ['at the ices'?].[7]

There is something to be said for the unattested eau glaise 'clay water' (as if 'dirty water'), like attested terre glaise 'clay soil', but both Ramsey[8] and Stewart[9] agree that Auglaize (and variants, implying "*aux glaises") is American French for 'at the lick(s)', literally 'at the clays', where wild beasts came to lick salt and minerals from the soil, and fulfilling the lacuna in standard French for a "salt lick." The spelling "glaize" is archaic (as in Cotgrave's French-English dictionary of 1611). In addition, in Arkansas there is a creek and mountain Glazypeau, from French glaise à Paul 'Paul's lick'. The assumed indigenous American (Algonquian) "'fallen timbers' or 'overgrown with brush'" has no support without any attested etymons supplied and would not match phonetically in the case of Shawnee.

Under the terms of the Treaty of Greenville signed in 1795, northwestern Ohio was reserved for Native Americans. The area now comprising Allen County was officially off-limits to European settlement until the Treaty of Maumee Rapids in 1817.[24] Under the terms of this treaty, the Shawnee tribe was assigned reservations at Wapakonetta and at their "Hog Creek" settlement along the Ottawa River; this comprised most of what is the present-day Shawnee Township. The latter treaty opened the way for the Ohio Legislature on March 1, 1820 to create fourteen counties, including Allen,[24] which was defined as Ranges 5 through 8 east and Towns 3 through 6 south.

The first permanent settlement within the present-day bounds of Allen County took place in 1824, when Christopher S. Wood and his family settled in section 7 of Bath Township.[25] The organization of Bath Township predates that of Allen County, with its first township meeting held on March 2, 1829. On Feb. 12, 1829, an act of the legislature set aside land for a "county town".[26] Wood was appointed commissioner to determine the location of this "seat of justice" for Allen County. This was done on March 3, 1831, with Wood appointed as Town Director. He laid out plots of land to be sold in section 31 of Bath Township,[27] and the plat was filed April 20, 1831, founding what developed as the city of Lima, Ohio.

The first court of justice was held in August 1831,[28] and it is believed that the assembly of men, in informal session, selected the name for the seat of justice by drawing names from a hat. The meeting was held at the cabin of James Daniels, which was located on the bank of the Ottawa River near the current location of Market Street.[28] Patrick G. Goode of Montgomery County, special prosecuting attorney at that session, is credited with suggesting the name of "Lima" (capital of Peru and source of the quinine used to treat the malaria prevalent in the area of the Great Black Swamp). At the County Commission session on June 6, 1831, the formation of a second township, Jackson, was approved.[28]

In 1832 the Shawnees, including those living in the Hog Creek reservation (present day Shawnee Township), were removed to eastern Kansas. They received payment of $30,000 in fifteen annual installments for their lands, which had an estimated value of over $200,000 at that time.[29] They arrived at their new home with few provisions and immediately suffered an epidemic of cholera, due in part to the poor sanitation in their new territory.[29]

Following these changes Lima, the county seat, was located in what became the center of the county, rather than in the northern quarter. The western part of the county gained a significant stretch of the Miami and Erie Canal, which was completed in 1845. The reorganization also brought the towns of Spencerville, laid out in 1844 and located on the canal,[13] and Bluffton within the bounds of the county.

In 1885, oil was discovered in Lima. This began a boom in Allen County which lasted until after 1910.

The county is crossed by the Auglaize River and the Miami and Erie Canal. The headwaters of the Saint Marys River, the Great Miami River and the Scioto River as well as portions of Grand Lake St. Marys and Lake Loramie are located within the county.[11]

Auglaize County is governed by an elected Board of Commissioners.

The county's first courthouse, built in 1851 at a cost of $11,499, was in use until 1894, when the current Courthouse first opened to the public. Occupying an entire city block, the Courthouse and its adjacent powerhouse cost the then-princely sum of $259,481.00. Some 85 men took 18 months for its construction, commencing on July 2, 1893. Built of Berea sandstone with tile floors, the Courthouse was highly fire-resistant. The boilers for heating and power generation, a significant cause of fire at the time, were located in a separate powerhouse. Also there were the steam-driven dynamos that produced the electricity which, along with steam for heating and hot water, was fed to the building via an underground conduit. The Courthouse marked its centennial in 1994, and continues in its role as seat of the county's courts,[23] along with the much newer West Municipal Court in St. Mary's.[24] 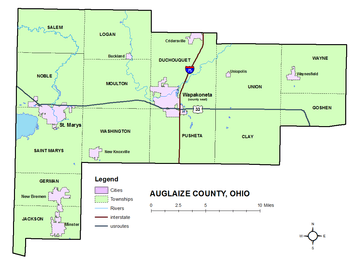 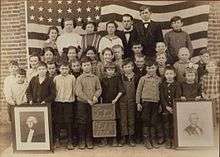