Paulding County is a county located in the U.S. state of Ohio. As of the 2010 census, the population was 19,614.[1] Its county seat is Paulding.[2] The county was created in 1820 and later organized in 1839.[3] It is named for John Paulding, one of the captors of Major John André in the American Revolutionary War.[4]

The Ottawa tribe of Native Americans were the prevalent occupants of the region before Europeans arrived in North America following the 1492 expedition of Christopher Columbus. By 1750, however, there were Miamis, Prankaahaws, Delawares, Shawnee, Kickapoos, Muscounteres, Huron, Weas, Wyandotts and Mohawks .

Under the Northwest Ordinance of 1787, the Continental Congress opened what is now Ohio, Indiana, Illinois, Michigan, and Wisconsin to settlement. However, the Treaty of Paris that ended the American Revolution in 1783 allowed the British to remain in the Northwest Territory until matters were resolved with the Indians. General Washington sent General "Mad" Anthony Wayne to subdue the native population. He built a series of forts, including Fort Brown, located between Charloe and Melrose. In order to defend against Indian ambush, he cut a swath of woods a mile wide, known as the Wayne Trace. His campaign culminated in a decisive 1794 victory by the Legion of the United States against Indians led by Chief Little Turtle of the nearby Maumee, Ohio in the Battle of Fallen Timbers, and signing of the Treaty of Greenville in 1795.

Paulding County was originally part of territory set aside for Ohio’s Indian people by the Treaty of Greenville, though that did not last long. Paulding County was organized by the legislature on April 1, 1820 from lands that were formerly part of Williams County. At that point, it consisted of 12 perfectly square townships. In 1845, Defiance County was formed from lands that were part of Williams County, plus the northern half of Auglaize Township. It was at this time that four sections of Emerald Township were transferred to Auglaize Township.

Settlement of Paulding County was slow, due to the difficult living conditions. Farmers complained that they grew two crops a year - frogs and ice. Many residents suffered from the ague, a disease later determined to be malaria. The primary industries were based on the thick forests. Many timbers were floated up the Maumee River to be used as ship's masts. The trees were so large that one man lived in a hollow tree. There were also many who earned money through the winter by crafting barrel staves with an adze.

George Washington had promoted the construction of canals to provide interior transportation for the fledgling nation. Once the Erie Canal was opened in 1825, entrepreneurs promoted other canals, including the Miami and Erie Canal and the Wabash and Erie Canal. The Miami and Erie ran from Lake Erie to the Little Miami River near Cincinnati, through Paulding County, and the Wabash and Erie Canal went west into Indiana, meeting the Miami and Erie in Junction, a community in Auglaize township. The canal excitement was so great that people were leaving Fort Wayne, Indiana for Junction, feeling that it had a much brighter future. Canal workers choosing Paulding County as their tax home built the county's population to 25,000 people in 1835, a number it has never approached since.

The combined canal system was the largest canal system in the world - but was only profitable for a short period. The canal was useless in winter, and the banks were constantly caving in, requiring constant dredging to remain passable. To protect the banks, canal boats had to operate at extremely slow speed - and the canal system started being abandoned even before it was completely built. The coming of the railroad quickly supplanted the canals as the primary means of long-haul travel.

A relic of this era is the Furnace Farm near Cecil. Ore was brought in by canal, where it was turned into iron using the ample local fuel. One furnace remains, where it was allowed to cool without being emptied, there being no point in pouring iron that could not be shipped economically to market.

Built in the 1910s, the Paulding County Carnegie Library was the first Carnegie library to serve an entire county instead of a single city.[5] In addition to the library, Andrew Carnegie matched local funds to install a pipe organ inwhat is now known as Paulding United Methodist Church.

In the early 20th century, Paulding had the highest unsolved murder rate of any county in the USA. The Purple Gang was thought to be exporting the corpses of their victims to the rural countryside, where they could be dumped without being seen. The sheriff argued that they were not local people, not murdered locally, and it was not worth spending large sums of tax dollars on what was essentially a littering problem.

The center of the county is 723 feet above sea level,[7] and the rest of the county does not vary much from that. The land is the most level of any county in the state, and plats look like a checkerboard, with roads every mile. This level terrain resulted in Paulding County being entirely within the Great Black Swamp, unlike any other.

The county contains U.S. Routes 127, 24, and 30 (the Lincoln Highway). There are two major rivers, the Auglaize and the Maumee, as well as numerous small creeks. The largest bodies of water are manmade ponds.

With students from kindergarten to high school at one location, the Paulding campus of PEVS is one of the largest schools in the state. 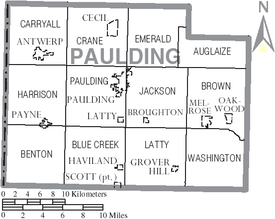 Map of Paulding County, Ohio with municipal and township labels

The Paulding County motto of "No Compromise" came from a banner carried by participants in the Reservoir War.

Paulding County was the first county in the US to receive funding from steel magnate Andrew Carnegie to build a library. Carnegie also matched funds to purchase the pipe organ in the Paulding Methodist Church.

Judge Calvin L. Noble of Paulding County spent the better part of his life as a Paulding County resident. His claim to fame is that he changed the name of the city of Cleaveland, Ohio to Cleveland. Earlier in life, as a printer, he founded the Cleaveland Advertiser. As the name was slightly too long to fit atop the page, he omitted the one letter.