Standard of living in the United States 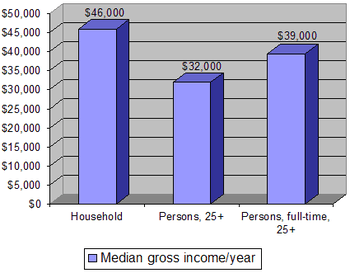 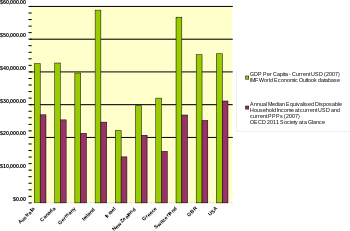 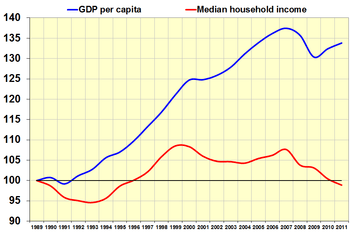 The growth in total US GDP vs median US household income.

In 2013, the Economist Intelligence Unit's Where-to-be-born Index, which takes into account material well-being as measured by GDP per capita, life expectancy, political stability, the quality of family life based on divorce rates, community life, crime and terrorism rates, gender equality, the quality of governance, climate, and unemployment rates, ranked the United States at 16th place, tied with Germany.[5]

The OECD Better Life Index, which measures quality of life according to 11 factors, ranks the United States as 7th among 34 OECD countries.

The homeownership rate is relatively high compared to other post-industrial nations. In 2005, 69% of Americans resided in their own homes, roughly the same percentage as in the United Kingdom, Belgium, Israel and Canada.[6][7][8] In 2007, Americans enjoyed more cars and radios per capita than any other nation[9] and more televisions and personal computers per capita than any other nation with more than 200 million people.[10][11]

In colonial America, the standard of living was high by 18th century standards. Americans could choose their diet from a diverse range of plants and animals from Europe and the Western Hemisphere, and this, combined with favorable weather conditions, ensured that Americans never had to deal with harvest failures. There was little exposure to epidemic diseases, and low wealth inequality, ensuring that even the poor were well-fed.

Historians have used height to measure living standards during this time as average adult heights can point to a population's net nutrition - the amount of nutrition people grew up with as compared to biological stress which can cause lower heights in adulthood, stemming from things like food deprivation, hard work, and disease. According to military records of American and European men, Americans were on average two to three inches taller than Europeans.

Average heights showed little change until the second quarter of the 19th century, with the Industrial Revolution. The growth of canals, steamboats, and railways, as well as the public school system, mass immigration, and urbanization, increased exposure to diseases. Food prices rose in the 1830s, and industrialization brought along with it growing wealth inequality and business depressions that further worsened the situations of the poor. As a result, average stature and life expectancy declined, and only rebounded from 1910 to 1950, as incomes rose, urban conditions became less crowded, and public health measures were put in place.[12]

In 1980, the American standard of living was the highest among the industrial countries, according to the OECD. Out of the 85 million households in the United States, 64% owned their own living quarters, 55% had at least two TV sets, and 51% had more than one vehicle. In terms of possession of telephones, TV sets, school enrollments, animal protein in diets, and energy consumption, the United States was far ahead of other industrialized countries.[42] Wealthy and middle class and a majority of poor Americans had higher after-tax incomes than their counterparts almost anywhere else in the world.[38][43] By 1985, the US per capita income was $11,727, one of the highest among industrialized countries. By the mid-1980s, 98% of all households had a telephone service, 77% a washing machine, 45% a freezer, and 43% a dishwasher.[44]

In the 1990s, the average American standard of living was regarded as amongst the highest in the world, and middle class and poor Americans were still, on average, richer than their counterparts in almost all other countries, though the gap with some European countries had noticeably narrowed.[38][45]

The US has... a per capita GDP [PPP] of $42,000... The [recent] onrush of technology largely explains the gradual development of a "two-tier labor market"... Since 1975, practically all the gains in household income have gone to the top 20% of households... The rise in GDP in 2004 and 2005 was undergirded by substantial gains in labor productivity... Long-term problems include inadequate investment in economic infrastructure, rapidly rising medical and pension costs of an aging population, sizable trade and budget deficits, and stagnation of family income in the lower economic groups.[47]

The United States has one of the widest rich-poor gaps of any high-income nation today, and that gap continues to grow.[51] Some prominent economists have warned that the widening rich-poor gap in the U.S. population is a problem that could undermine and destabilize the country's economy and standard of living. In 2006, Alan Greenspan wrote that "The income gap between the rich and the rest of the US population has become so wide, and is growing so fast, that it might eventually threaten the stability of democratic capitalism itself".[52] In 2013, George Friedman, the head of Stratfor, wrote that the middle class' standard of living was declining, and that "If we move to a system where half of the country is either stagnant or losing ground while the other half is surging, the social fabric of the United States is at risk, and with it the massive global power the United States has accumulated."[53]