This article is about the district. For its eponymous headquarters, see Guna, India.

Guna district (Hindi: गुना जिला) is one of the 51 districts of Madhya Pradesh in central India. Its administrative headquarters is Guna. The district has a population of 1,240,938 (2011 census). It has an area of 6390 km², and is bounded on the northeast by Shivpuri District, on the east by Ashoknagar District, on the southeast by Vidisha District, on the southwest by Rajgarh District, on the west and northwest by Jhalawar and Baran districts of Rajasthan state. The Sindh River flows northward along the eastern edge of the district, forming part of the boundary with Ashoknagar District, and the Parbati River flows northwestward through the southern portion of the district, forming part of the boundary with Baran District before flowing into Rajasthan.

On 15 August 2003 Guna District was split in two, with the eastern portion becoming Ashoknagar District. 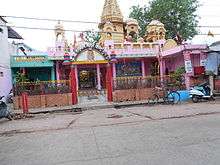 Awan is a town in the Guna district of Madhya Pradesh, India, located 37 kilometers south from Guna headquarters, 9 kilometers from Raghogarh-Vijaypur, and 152 kilometers from the state capital Bhopal. This town has a nagar panchayat and a Raghogarh Tehsil, currently under Gwalior division. The PIN code is 473226 and nearest head post office is in Raghogarh. Nearby villages are: Achkalpur, Parkana, Gulwada, Raghogarh, and Gawari. Local tehsils are Chanchoda to the south, Aron to the east, Guna to the north, and Manoharthana westward.

The closest cities are Raghogarh-Vijaypur, Ashok Nagar, Guna, and Sironj.

How to reach Awan