Shivpuri District is a district of Madhya Pradesh state of India. The town of Shivpuri is the district headquarters.

Shivpuri District has Narwar town of historical importance just east of the Kali Sind River, situated at a distance of 41 km from Shivpuri. It is famous for medieval fortress of Narwar.

Madhau Chauk is a main market of city Shivpuri. All marketing facilities are available here. 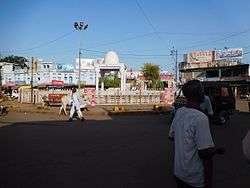 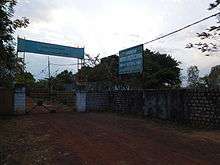 Madhav National Park is located between Agra-Mumbai and Jhansi-Shivpuri road.Its area is 157.58 square kilometers.The park is open to visitors throughout the year. Blackbuck, Indian gazelle and chital Knil large number of cows, sambar, Chausinga, black buck, sloth bears, leopards and other inhabitants of the park . Shivpuri is famous for Madhav National Park. This national park has a varied terrain of forested hills and flat grasslands around the lake. It is very rich in biodiversity.Sakhya Sagar and Madhav Sagar lakes, created on Manier River in 1918, are two important biodiversity support systems in the national park. The Sailing Club situated on Sakhya Sagar at the entrance of the National park is a place of scenic beauty. 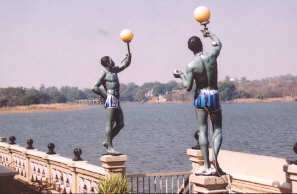 Col. G.S. Dhillon is a famous person from Shivpuri District. He was the last survivor of the Historic trial on 5 November 1945 at the Red Fort. He was living at Hatod village in Shivpuri District till his death. 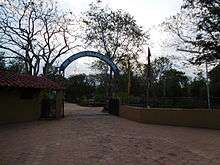 Shivpuri Tourism Center.Here the tourist is always keep coming.Shivpuri is the center of attraction for tourists throughout the year,but Shivpuri attract to tourist after first rain .Tourist Village is located here to stay for tourist near Picnic Spot Bhadaiya Kund .

Chhatari (memorials ) ornate marble is a fine example of workmanship. 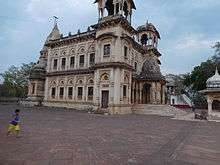 Its campus is on Chhatari Road which leads from Do Battai Chauraha to Bhadaiya Kund. As we enter in the campus of Chhatari ,we view first memorial of dowager queen Maharani Sakhya Raje Scindia, in a delighful fusion of Hindu and Islamic architectural styles, with their shikhara type spires and Rajput and Mughal pavilions.A tank is created in front of this memorial.The memorial of Madhav Rav Scindhia is built across the tank facing to wards Maharani Sakhya Raje Scindhia. 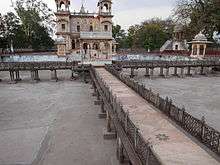 Management of Chhatari is under control of a registered trust.[1]

In 2006 the Ministry of Panchayati Raj named Shivpuri one of the country's 250 most backward districts (out of a total of 640).[2] It is one of the 24 districts in Madhya Pradesh currently receiving funds from the Backward Regions Grant Fund Programme (BRGF).[2]