This article is about the section of Interstate 95 in South Carolina. For the entire route, see Interstate 95.

Interstate 95 is a major Interstate Highway, running along the East Coast of the United States from Florida to Maine. In South Carolina, I-95 runs approximately parallel to the Atlantic Ocean shore although about 50 miles (80 km) inland, from Hardeeville in the south to Dillon in the northeast. The route runs through the major cities of Florence and Walterboro.

The southern gateway to I-95 in South Carolina

For the most part, the 198-mile (319 km) drive is fairly benign, passing through the pine forests, farmlands, and blackwater streams and swamps of the Coastal Plain. However, a few landmarks do exist to break up the monotony. Crossing from the south from Georgia just over the Savannah River bridge, motorists are greeted to an elaborate gateway into the state of South Carolina. The Juanita M. White Crosswalk also exists between exits 18 and 21.[2] A flyover on twin high-spans over Lake Marion provides an unexpected scenic break in the center of the highway's length. Moving further north and out of the Palmetto State, the NC state line is prominently marked by the South Of The Border amusement complex at the US 301/501 exit. Local traffic parallel to the interstate uses US 301 from South Of The Border to Santee, US 15 from Santee to Walterboro, and a combination of US 17 and US 17 Alt from Walterboro to the Georgia state line north of Savannah. In addition, Interstate 95 shares a number of concurrencies, or multiplexes, with three of these U.S. Routes at various stretches in South Carolina.

The old US 15-301 bridge runs along the west side of I-95 and is used for recreational purposes. 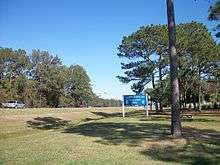 A welcome sign at the Jasper County Welcome Center

The South Carolina Department of Transportation (SCDOT) operate and maintain three welcome centers and five rest areas along I-95. Welcome centers, which have a travel information facility on site, are located at mile markers 4 (northbound), 99 (southbound) and 195 (southbound); rest areas are located at mile markers 47 (north and southbound), 99 (northbound) and 139 (north and southbound). Common at all locations are public restrooms, public telephones, vending machines, picnic area and barbecue grills.[3]

The South Carolina Department of Public Safety (SCDPS) and State Transport Police (STP) operate and maintain one truck inspection/weigh station, located northbound at mile marker 74. The location utilizes weigh-in-motion that does not require commercial motor vehicles to leave the freeway to be weighed. An inspection shed and pit are also on site, where full-service inspections are performed for flagged and randomly picked trucks.[4]

Several parking area locations are also found along I-95; these were either formally rest areas or weigh stations that were converted. The parking areas offer no amenities and some are even restricted for commercial motor vehicles only.

Interstate 95 first appeared on state maps between 1962-1964, with construction from US 17 north of Hardeeville to Ridgeland. By 1967, more sections were under construction, including Pocotaligo to Walterboro and Santee to the North Carolina state line. The first section to officially open happened in 1968, from SC 527, near Gable, to SC 9/SC 57, in Dillon.

In 1971-1972, more sections of Interstate 95 was completed: Going north from SC 9/SC 57, in Dillon, to the North Carolina state line. Going south from SC 527, near Gable, along the recently completed 1968-built Lake Marion bridge, to US 301 Connector, in Santee (exit 97).[12] Also part of US 17 between Ridgeland (exit 22) to near Yemassee (exit 33) was combined with Interstate 95, with temporary status through Coosawhatchie; Interstate 95 then continued on new freeway north to SC 63, in Walterboro.

Various small projects along the route are scheduled to fix various intersections and replace bridges along route, but no major projects scheduled. Discussions of possibly converting Interstate 95 into a toll road have met with resistance, especially within SCDOT; however if both North Carolina and Georgia changed Interstate 95 into a toll road, then they would consider it as well.[14]

Local leaders in Hardeeville are pushing for a new exit 3, at Purrysburg Road, for a proposed RiverPort Business Park. Project is currently still in the planning stage with no time frame or official confirmation from SCDOT at this time.[15][16]

Template:Attached KML/Interstate 95 in South Carolina
KML is from Wikidata
This article is issued from Wikipedia - version of the 11/30/2016. The text is available under the Creative Commons Attribution/Share Alike but additional terms may apply for the media files.